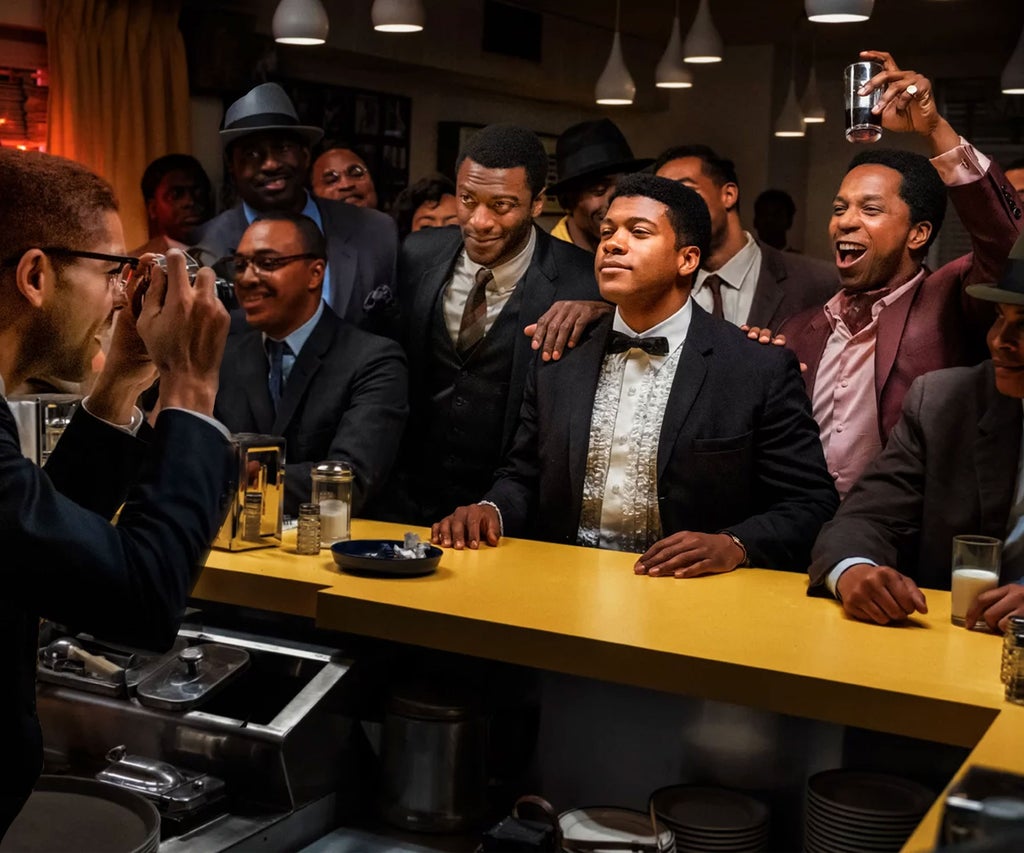 It only takes moments into Regina King’s directorial debut before you realize — like really start to understand — what the term “actor’s director” means. Sure, the two words are pretty self-explanatory, but as soon as each one of One Night In Miami’s four principal cast members deliver their opening lines as the giants of Black history they are portraying (Leslie Odom Jr. as Sam Cooke, Kingsley Ben-Adir as Malcolm X, Aldis Hodge as Jim Brown, and Eli Goree as Cassius Clay before he became Muhammad Ali) it’s clear how King, an Academy Award-winning actress herself, was able to pull out these staggering award-worthy performances and why she cast this quartet in the first place.

The film, based on a play written by Kemp Powers who also wrote the screenplay, had its virtual North American premiere at the Toronto International Film Festival this past weekend. Like so many TIFF films before it, it’s already getting Oscar buzz. It’s also stirring up some controversy because of King’s above casting choices. One Night In Miami has such an ambitious premise — the fictionalized account of the real-life meeting of music mastermind Cooke, football legend Brown, civil rights hero X, and boxing superstar Clay on the night he beat Sonny Liston to become the heavyweight champion of the world — you could easily have predicted that Twitter would have something to say about who was playing who.

There are no gimmicky impressions to be found in the film, but King has still been questioned over her decision to hire these particular performers given that two of the four actors portraying these Black American heroes are not, in fact, American. Goree is Canadian, from Halifax, and Ben-Adir is British. While some of the concerns are valid, when you watch the movie, you’ll quickly see that most of the backlash is misguided. And that this mantra will never let you down: in Regina King we trust.

When you watch One Night In Miami, you’ll quickly see that most of the backlash is misguided. And that this mantra will never let you down: in Regina King we trust.

During a TIFF press conference for the film (moderated by yours truly), King spoke about her decision to cast these four actors. For King, it was more about “infusing [their] heart, mind, and soul into these men,” and making sure these actors could portray the four legendary Black icons without caricaturing them. “Everybody knows what these men look like,” she said. “Everybody thinks they know everything there is to know about these four men and that could be a daunting task. Kingsley, Lesley, Eli, and Aldis were all expected to know that we were not doing any impersonations.”

Ben-Adir’s casting has garnered the most discourse since he joins a long line of British actors who have been tasked with playing U.S. civil rights leaders (David Oyelowo as Martin Luther King Jr. in Selma, Cynthia Erivo as Harriet Tubman in Harriet, and

These Are The Best Emmys Looks Of All Time

These 5 Shades Of Balayage Are Trending For Fall