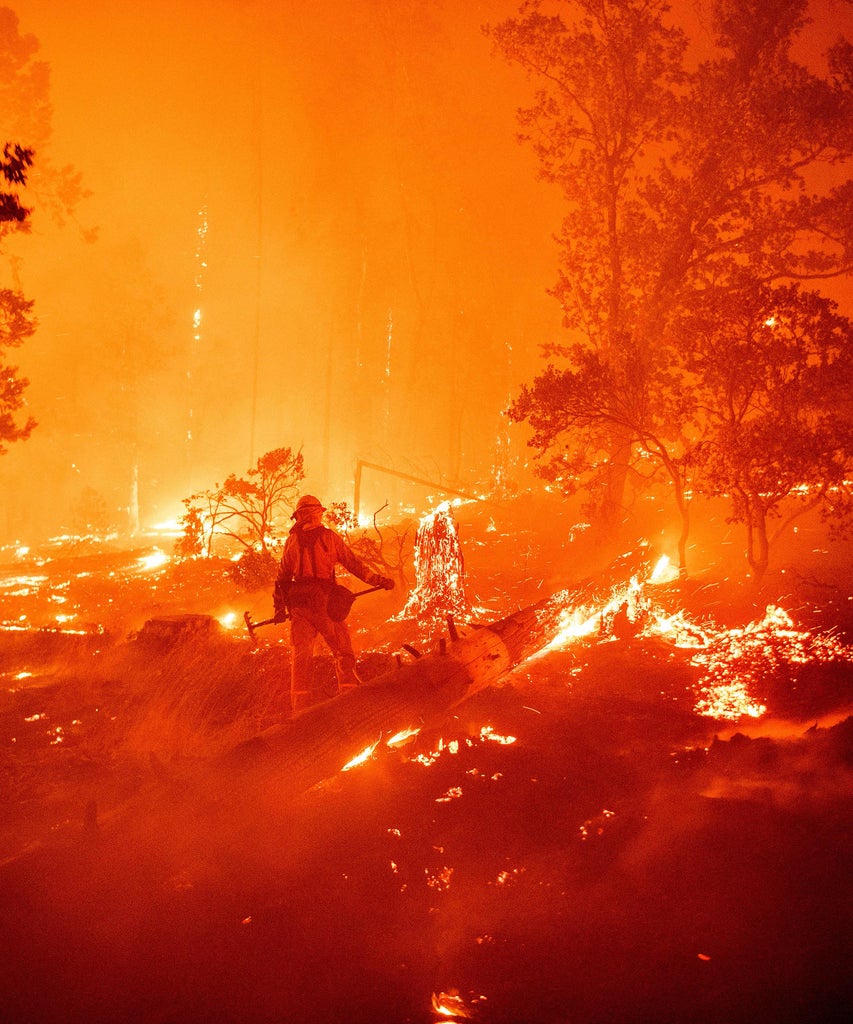 TOPSHOT – A firefighter works the scene as flames push towards homes during the Creek fire in the Cascadel Woods area of unincorporated Madera County, California on September 7, 2020. – A firework at a gender reveal party triggered a wildfire in southern California that has destroyed 7,000 acres (2,800 hectares) and forced many residents to flee their homes, the fire department said Sunday. More than 500 firefighters and four helicopters were battling the El Dorado blaze east of San Bernardino, which started Saturday morning, California Department of Forestry and Fire Protection (Cal Fire) said. (Photo by JOSH EDELSON / AFP) (Photo by JOSH EDELSON/AFP via Getty Images)

As wildfires ravage the Western United States and evacuation orders increase, reports of missing people have began to circulate. More than 20,000 people in Northern California alone have been ordered to leave their homes due to the apocalyptic and widespread fires that are currently devastating California and the Pacific Northwest. With the worsening spread of the fires comes a human toll, in addition to the environmental one.

In Butte County, California, located north of Sacramento, at least a dozen people have been confirmed missing in connection with the Bear Fire, part of the North Complex Fire, which has been burning for three weeks but has picked up steam in the last 48 hours thanks to strong winds.

“This is the part of the presentation I’ve been dreading,” Butte County Sheriff Kory Honea said in a press conference Wednesday, before breaking the news of the three dead and dozen missing people. “It brings back memories of when I stood before you back in 2018 to talk about the people who lost their lives during the Camp Fire.” (The same area was hit hard by the Camp Fire in 2018, when 85 people were killed.)

The fires have also resulted in three people’s deaths in Oregon and one in Washington state, according to USA Today, bringing the total death toll to at least seven people.

While California has a fire season each year, from August to November, the fires this year have been much worse than in years previous. But California is not alone: Oregon and Washington State have also been heavily impacted. As of Thursday, there were 24 active fires burning in the state of California and more than 90 burning across 13 Western states, burning a total of more than 5,300 square miles.

The worsening fires have been attributed to a variety of factors, all of which can be traced back to climate change: skyrocketing temperatures at more frequent and sustained rates is the main cause, according to experts, and it’s only going to continue to escalate. The U.S. Forest Service announced on Wednesday that it was closing all 18 National Forests in the state of California as a precautionary measure after hundreds of stranded hikers …read more

Finally, You Can Match Your iPhone Grip To Your Manicure