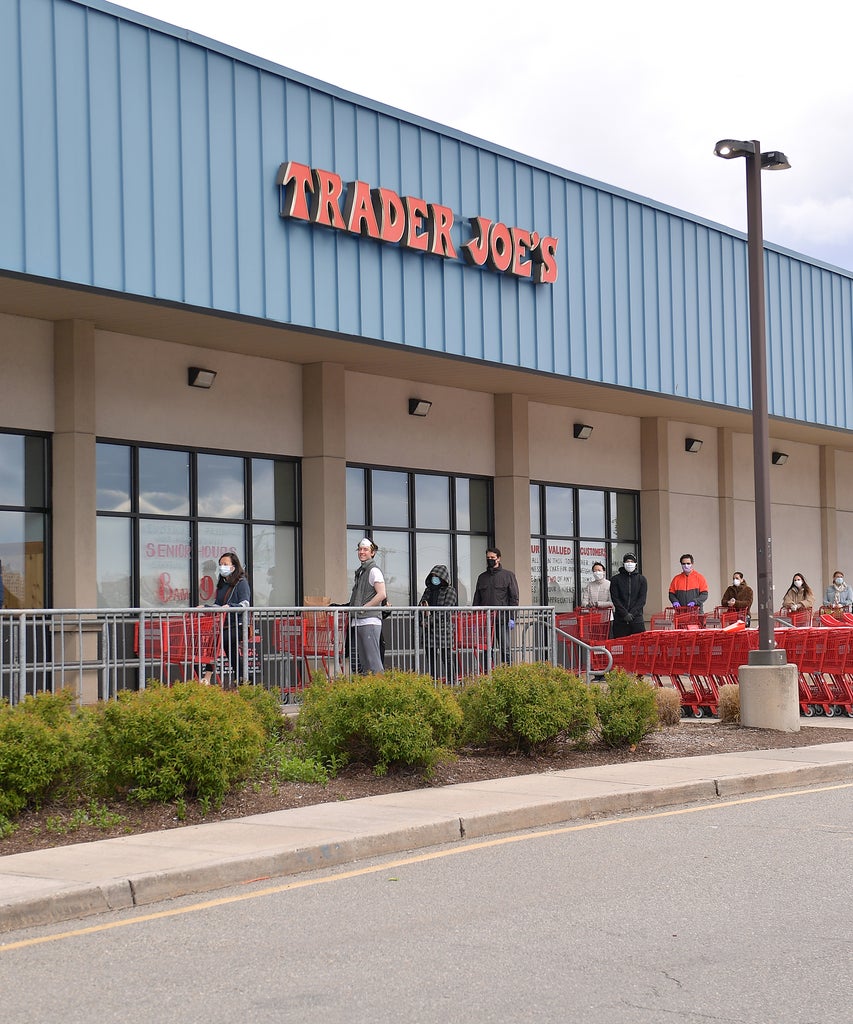 EDGEWATER, NEW JERSEY – APRIL 10: Due to tightening regulations, lines at stores are forming outside to facilitate social distancing while shopping, like at the Trader Joe’s on April 10, 2020 in Edgewater, New Jersey. COVID-19 has spread to countries throughout the world, claiming nearly 103,000 lives and infecting nearly 1.7 million people. (Photo by Michael Loccisano/Getty Images)

Earlier this month, Trader Joe’s stated it would be taking steps to amend certain packaging after receiving public backlash spearheaded by a Change.org petition created by Briones Bedell. The petition calls for the removal of the chain’s “racist branding and packaging,” referring to the “Trader Joe’s” modifiers on some of its packaged food items, such as “Trader Ming’s” on the Kung Pao Chicken and “Trader José’s” on Premium Lager from Mexico.

A Trader Joe’s representative originally told ABC News, “While this approach to product naming may have been rooted in a lighthearted attempt at inclusiveness, we recognize that it may now have the opposite effect — one that is contrary to the welcoming, rewarding customer experience we strive to create every day.” The statement went on to say that Trader Joe’s had been in the process of removing all “ethnically” modified versions of Trader Joe’s from its branding in the near future. However, according to a new statement on its website, the grocer has reversed course.

Dated July 24, 2020, the post read: “In light of recent feedback and attention we’ve received about our product naming, we have some things we’d like to say to clarify our approach. […] We want to be clear: we disagree that any of these labels are racist. We do not make decisions based on petitions.” The statement goes on to explain Bedell’s petition and concludes that it will not, in fact, be taking any steps towards removing these modifiers. Instead, the grocer said it makes decisions based on purchasing patterns and feedback from Crew Members and customers. The post ended by solidifying the reasoning behind the decision to keep these labels, “Recently we have heard from many customers reaffirming that these name variations are largely viewed in exactly the way they were intended ­— as an attempt to have fun with our product marketing.”

I Struggled With Acne For Years. Fake Freckles Helped Me Find My Confidence.

The two statements, from merely weeks apart, seem contradictory to one another, but the most recent statement is clear. In an email to Refinery29, a spokesperson for Trader Joe’s responded, “Based on customer feedback, over the years, we have changed the names of, or discontinued hundreds of products with name variations of the Trader Joe’s brand.” The spokesperson also restated that none of Trader Joe’s efforts “have ever been the result of a petition. And as for the remaining products containing what the petition called “racist packaging and branding,” Trader Joe’s told Refinery29, “We …read more