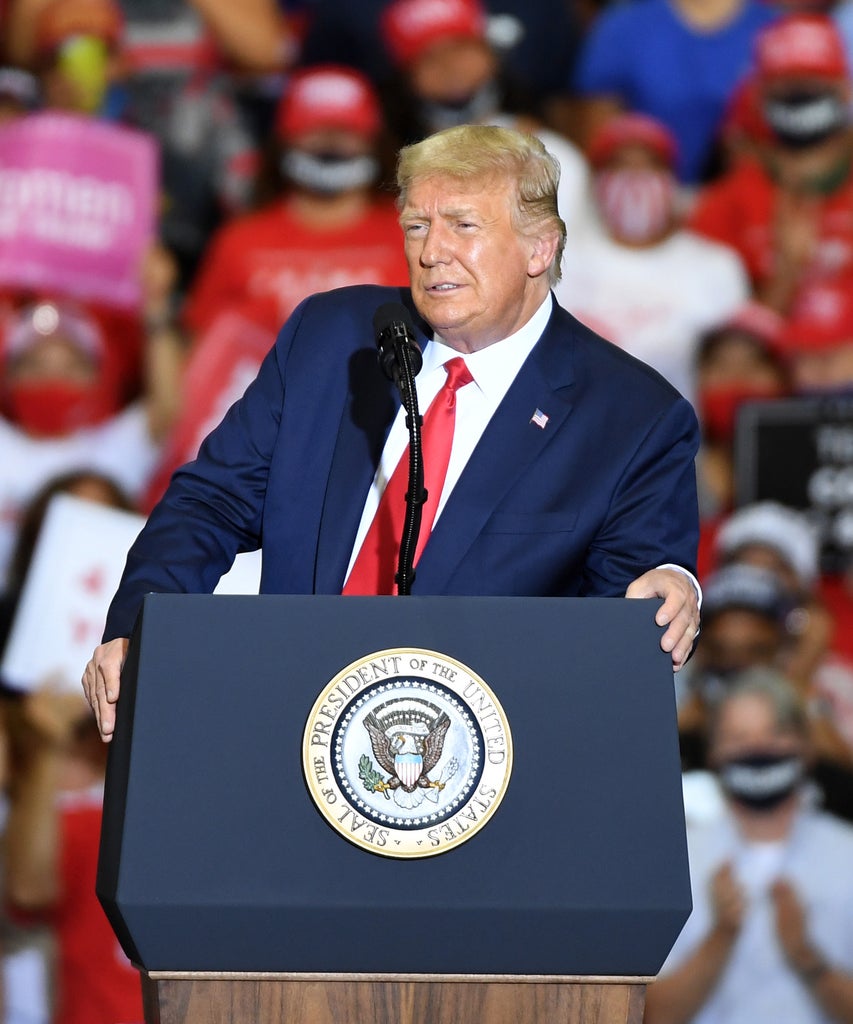 On Sunday, in defiance of Nevada state and law officials — as well as an entire global pandemic — the President of the United States decided it was due time to host a mass indoor rally.

Thousands of Trump supporters gathered in a Henderson, Nevada warehouse, where the president took the stage for his first indoor rally since June. But despite the professionally-shot images that show the crowd behind Trump masked up, according to photos shared on social media, almost all attendees — who were standing side by side in the packed warehouse — did not wear face masks or practice social distancing.

So why is it that only some images show mask-wearers in MAGA hats? Well, as it turns out, all of the people who were standing directly behind the president on camera were instructed to wear face coverings, according to the Associated Press. Despite Trump’s rouse to appear safe, even Nevada officials pleaded with him to cancel the indoor event.

Prior to Sunday’s rally, Trump and his campaign were given a verbal and written warning by the City of Henderson. They highlighted the state rule, set in place by Gov. Steve Sisolak, that gatherings of more than 50 people during the pandemic were prohibited and that “large, live events” had to be approved by the Nevada Department of Business and Industry, Division of Industrial Relations. But Trump’s campaign rally did not have the city’s approval to be held and was threatened with a $500-per-violation fine.

Gov. Steve Sisolak didn’t hold back when condemning Trump for his decision to hold an unapproved, indoor rally as the coronavirus pandemic continues to spread throughout the country. Sisolak took to Twitter on Sunday night to call Trump’s actions “shameful, dangerous and irresponsible” and call out his failure to develop a “a unified national response strategy” that would protect U.S. citizens.

Sunday’s rally is Trump’s first indoor campaign event since his sparsely-attended June event in Tulsa, Oklahoma, one he bragged would have an attendance of at least 10,000 people (though it definitely did not). While tiktok users and K-pop fans were thought to be the reason behind the empty event, Trump assessed that a fear of contracting the coronavirus resulted in a low turnout. Despite those fears, Oklahoma saw an uptick in the number of infections three weeks after Trump’s rally, with the number of new cases jumping up to nearly 20,000 in early July.

Trump’s decision to ignore the science behind crowded indoor spaces and the pandemic, which has already killed around 200,000 Americans, with a current average of 1,000 deaths a day, really only tells us one thing: This is what Trump’s America really …read more

Hysterical Women: Why Is Hormonal Contraception Still Failing Us?

28 Tiered Dresses You Can Flounce From Summer To Fall In