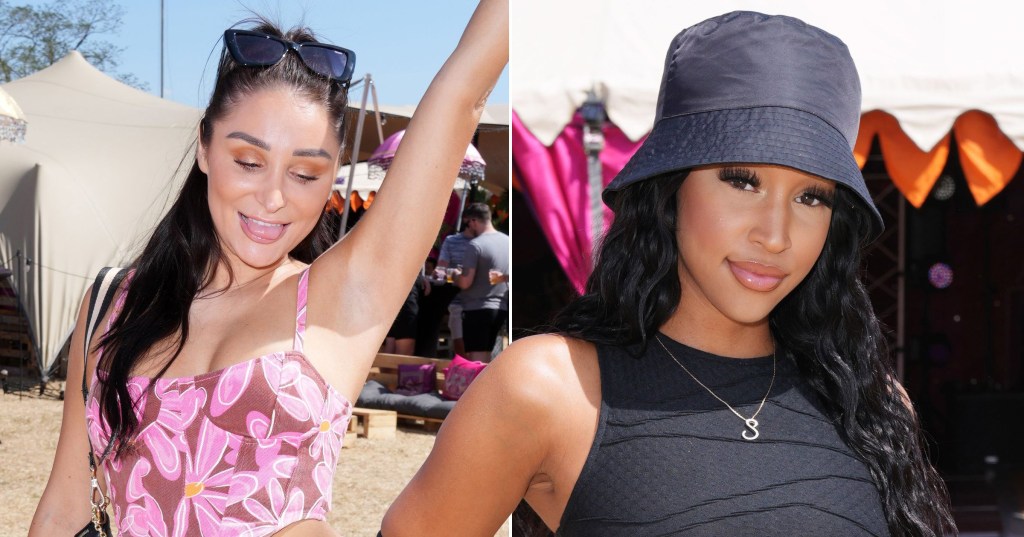 Coco Lodge and Summer Bowe are at the same festival, in the same VIP area, but don’t seem to want to hang out… (Picture: Rex Features)

Coco Lodge and Summer Botwe appear to not want to make it up just yet after their blazing row while filming the Love Island reunion.

The pair both appeared in the 2022 series of the ITV2 dating show, and remained popular with fans despite neither reaching the finals.

In the end, it was Davide Sanclimenti and Ekin-Su Culculoglu who walked away the winners, but the drama was far from over as Summer and Coco apparently got into a huge argument while filming the reunion show set to air on Sunday.

An insider who was present at the filming of the reunion claimed production had to ‘step in’ during a fiery row, which many are convinced is all to do with Josh Le Grove.

The fan wrote on social media: ‘Just been at the #LoveIsland reunion episode filming, very heated exchange between coco and summer production had to step in and close it down.’

This alleged argument took place during filming on Thursday, and on Saturday both girls headed off to the We Are FSTVL in London – though they appear to be taking great pains not to see each other.

Summer got dolled up with ex Islander Chyna Mills for the festival… (Picture: Instagram/ Summer Botwe)

Both Coco and Summer have been sharing updates with fans on Instagram, of them getting ready, travelling to and arriving at the festival – separately.

Summer looked stunning as she posed with fellow former Islander Chyna Mills in their hotel, tagging the festival in her stories; she later shared a clip of them arriving, writing: ‘Let the games begin.’

Coco, meanwhile, shared multiple clips of her with a group of friends – including ex-Islanders Nathalia Campos, Samira Mighty and Lacey Edwards on a bus, tagging each of them in her post.

Despite both being at the same festival, it doesn’t appear as though Coco and Summer are eager to meet up – but considering they’re both guaranteed to be in the same VIP area, anything could happen.

Coco looked gorgeous in a summery dress as she arrived at the festival (Picture: PrettyLittleThing/Shutterstock)

She and Nathalia cuddled up together as they prepared to party the day away (Picture: PrettyLittleThing/Shutterstock)

In photos from the VIP area, Coco was spotted hanging out and posing happily with other Islanders, with Summer nowhere to be seen.

She cuddled up to Nathalia in the sunshine, both dressed for the heat in short, body-hugging dresses.

Coco looked gorgeous in a floral pattern, cut-out at the sides to show off her figure.

Nathalia, meanwhile, looked classy in beige, the top of her dress patterned in a corset style.

And while Coco opted for comfortable trainers for the festival, Nathalia went all-out in knee-high white boots that had her towering …read more