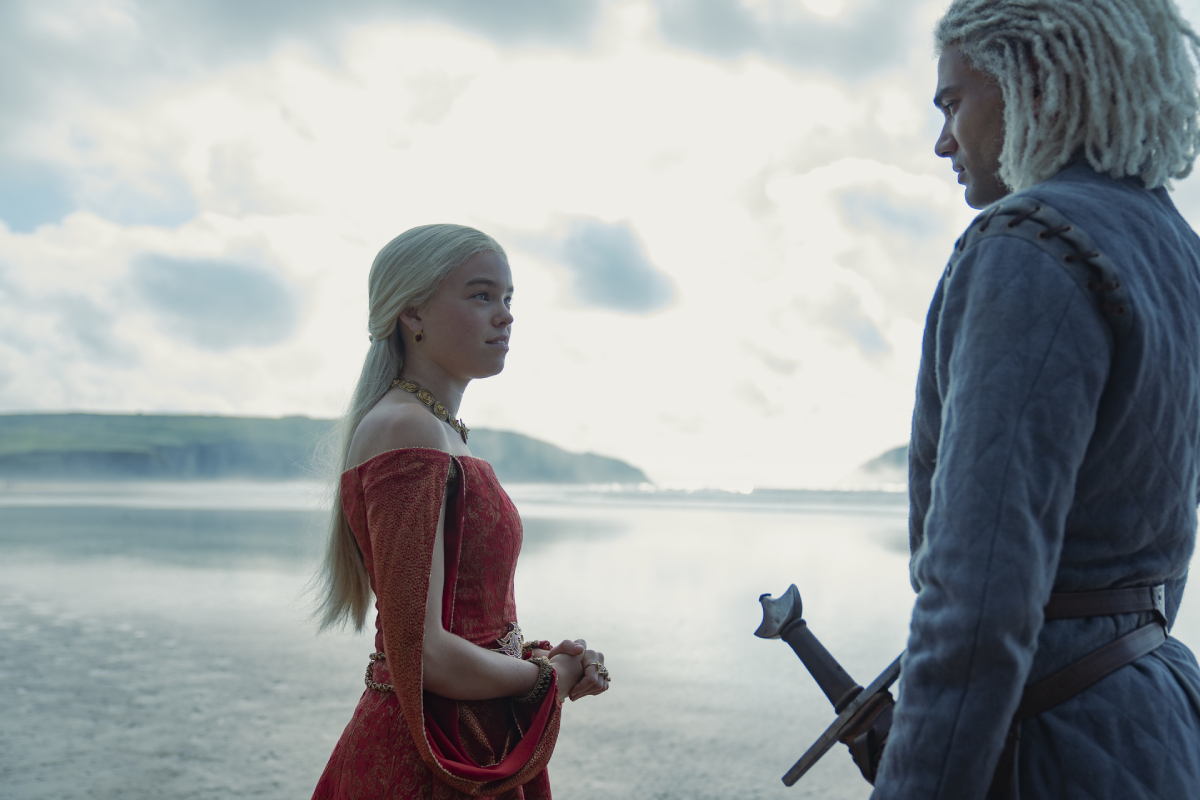 After Rhaenyra puts her reputation at stake by

In House of the Dragon Episode 5, Rhaenyra has finally agreed to marry Laenor Valaryon. Rhaenyra and Laenor are cousins, and though they get along well enough, there are no real romantic feelings between the two of them. The pair come to an agreement as they walk beside the ocean before their wedding.

[Spoiler Alert: This article contains spoilers for House of the Dragon Season 1 Episode 5.]

After Rhaenyra puts her reputation at stake by sneaking out with Daemon, she finally agrees to marry Laenor Valaryon. However, both Rhaenyra and Laenor’s true desires lie elsewhere. “Dare I say it is a matter of taste? I prefer roast duck to goose,” Rhaenyra says to Laenor, explaining that she knows he isn’t interested in her.

Above them, Corlys and Rhaenys discuss the upcoming marriage. “You know his true nature,” Rhaenys tells her husband. Colys, however, thinks his son will “outgrow it,” telling Rhaenys, “There’s no pleasure in the world like bedding a woman.”

From these conversations, the subtext is clear — Laenor is gay, and Rhaenyra’s romantic interests lie elsewhere.

“I know that whatever agreement being struck up there will not change your appetites, nor will it change mine,” Rhaenyra adds to Laenor. She then suggests they perform their duties by getting married, “and when it’s done, each of us dines as we see fit.”

In a featurette for House of the Dragon Episode 5, co-showrunner Ryan Condal explained this chat between Rhaenyra and Laenor. “It’s a very modern conversation set in medieval subtext,” Condal said.

“They’re essentially agreeing to have an open relationship. Their fathers have both insisted upon this marriage pact. It’s not either of their choices, but they decide to do their duty to their own family.”

“It’s humorous, but it’s also just very clear that they’re both at peace with their sexual desires,” director Clare Kilner added. “I think they are really forward thinking as opposed to their parents who are stuck in the past and old-fashioned ways.”

Laenor and Rhaenyra both have lovers in George R.R. Martin’s books

House of the Dragon Episode 5 introduced Laenor’s lover, Ser Joffrey Lonmouth. As their conversation implies, Rhaenyra knows about Joffrey and is fine with Laenor continuing on with him. Rhaenyra also hopes to continue her sexual relationship with Ser Criston Cole. However, he declines, distressed that he broke his vow of chastity.

Laenor and Rhaenyra’s aforementioned agreement may be significant to the pair’s future children. House of the Dragon Episode 6 will jump forward ten years in time. In George R.R. Martin’s novel, Laenor and Rhaneyra have three sons together, but they are rumored to be fathered by Rhaenyra’s lover, …read more