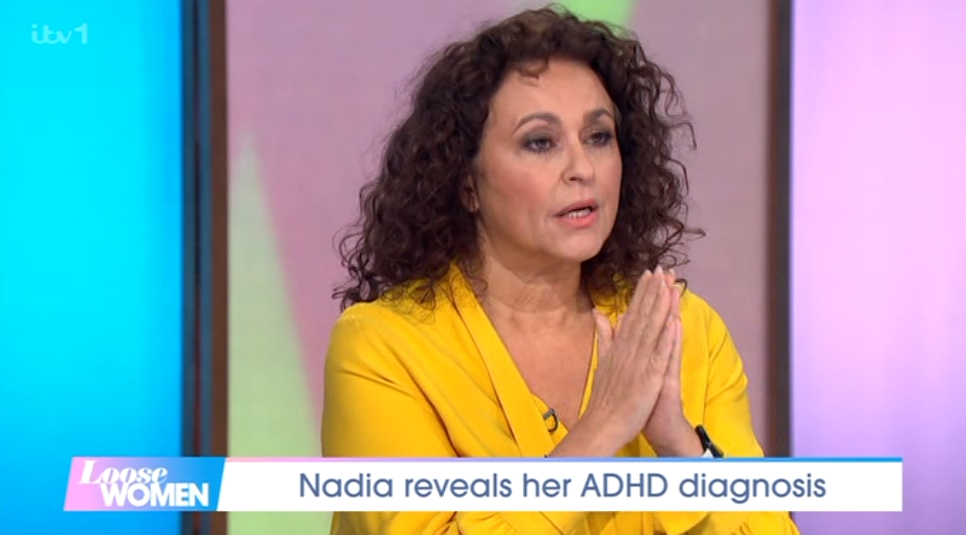 Nadia Sawalha teared up as she spoke about the impact of her later life ADHD diagnosis as she hoped for ‘forgiveness’ for past behaviours.

The former The Bill actor underwent a test for the condition on Thursday’s Loose Women after suspecting for years she had been living with it.

ADHD affects people’s behaviour, with symptoms including trouble concentrating and following instructions, as well as impulsiveness and feeling restless, according to the NHS.

In a clip on the long-running talk show, Nadia met with other women who had been diagnosed with ADHD later in life, confessing beforehand she felt ‘nervous’ about doing the test herself.

Her husband also questioned why she was meeting up with a doctor, saying: ‘It’s blindingly obvious you have ADHD.’

Nadia explained there were ‘so many things throughout my life that I want to forgive myself for.’

The ex-Casualty star also said she would be ‘frightened’ if she didn’t have the condition because ‘if it’s not ADHD then what are my past behaviours about?’

Nadia said she hoped she would drive again following the diagnosis (Picture: ITV)

While being tested by a medic, who asked Nadia a series of questions about her reactions and responses to day-to-day life, she broke down in tears as she realised she may be able to drive again.

Nadia said she had given herself a ‘lifetime ban’ on driving because she would ‘lose consciousness’, explaining it had been ‘incredibly debilitating.’

Nadia had an ADHD test on Loose Women (Picture: ITV)

After learning the results of the test, a teary Nadia said it was ‘pathetic’ but she was overjoyed she may be able to go behind the wheel again, now that there was a clear diagnosis.

Nadia then spoke to Kaye Adams, Denise Welch and Jane Moore in the studio about the condition, explaining she had cried because she was struggling to ‘accept’ there was a ‘reason for the chaos in my life.’

She said she felt relief she could ‘pause’ and be told you can ‘forgive yourself’ for past behaviours.

MORE : When will Lorraine, This Morning, and Loose Women air during the World Cup 2022?