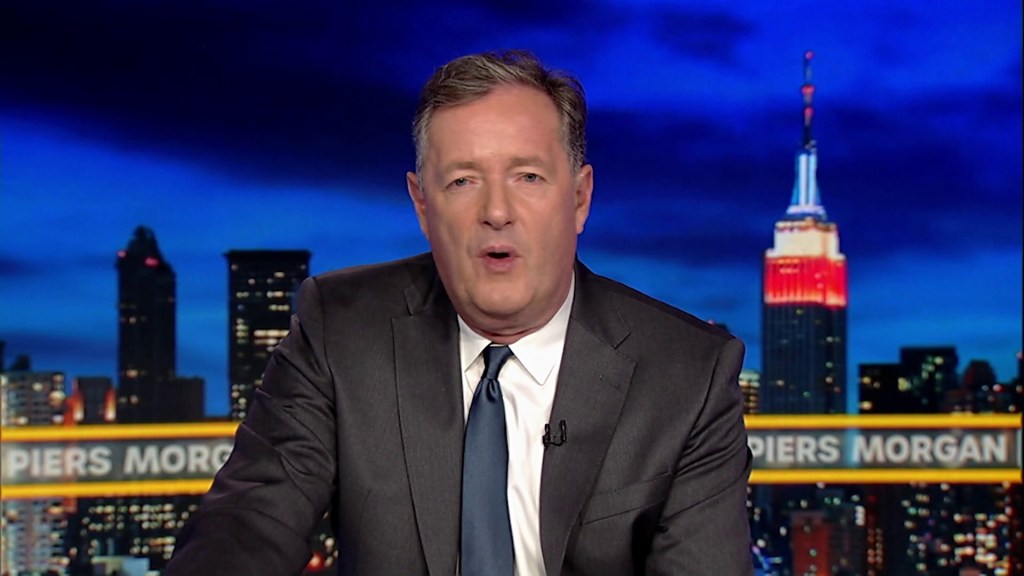 Piers Morgan is jetting off to Qatar for the 2022 World Cup (Picture: Talk TV)

Piers Morgan is basking in luxury as he jets off to Qatar for the 2022 World Cup after slamming ‘virtue-signalling’ conversations around human rights concerns in the country.

The presenter recently interviewed Cristiano Ronaldo about his grievances with Manchester United, leading to him departing from the club – and has since urged his favourite team Arsenal to pick up the footballer on a free transfer.

He did, however, rip into the England team for backing down on wearing the One Love armbands in support of the LGBTQ+ community, saying ‘I’m not gay, but if I was I’d be furious.’

He added: ‘If you’re going to virtue-signal, at least have the guts to stick to your supposed principles.’

Now the Piers Morgan Uncensored host has jetted off to Qatar in style, as he shared a snap of himself travelling first class from Heathrow.

In the photo, Piers can be seen putting his feet up – literally – as he relaxes in front of a TV, a tray and glass of water beside him.

He captioned it simply: ‘Off to the World Cup,’ along with an airplane emoji.

Followers quickly flooded the comments section to give their two cents – with many using the opportunity to tell the presenter to take his shoes off the furniture.

Another noted that Piers was arriving in Qatar just as Ronaldo’s team Portugal were set to play, joking: ‘I see what’s going on here.’

Piers has been vocal in his excitement for the Qatar World Cup, previously complaining that the BBC did not air the opening ceremony on its main channels.

One follower joked about Piers arriving in Qatar just in time to watch Portugal play, after his interview with Ronaldo made headlines around the world (Picture: Enterprise News and Pictures)

The opening ceremony, which featured a performance from BTS star Jungkook and a surprise appearance from iconic actor Morgan Freeman, was aired on the red button, on BBC iPlayer, and online on the BBC Sport website.

Viewers watching on BBC One tuned in to a discussion between presenters including Gary Lineker and Alex Scott, which focused on the criticism levelled at the country due to its human rights record.

He said it was ‘outrageously disrespectful to Qatar that the BBC didn’t broadcast the World Cup opening ceremony, and instead put out more virtue-signalling guff about how awful it is.

‘If they’re that appalled, they should bring home …read more