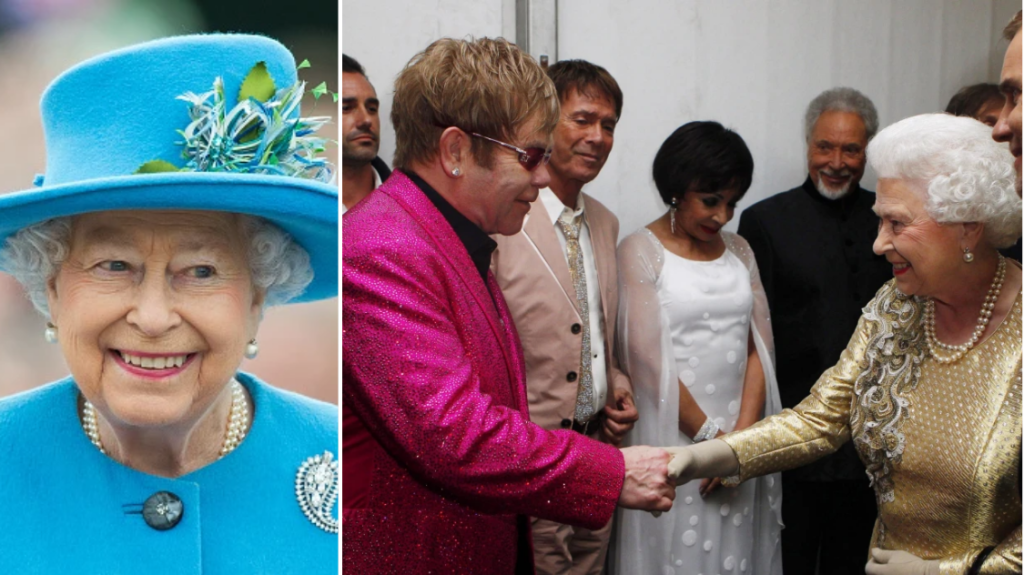 Sir Elton John has shared his personal memories full of ‘joy and admiration’ with the Queen as he joined celebrities and other public figures including Michelle Obama, Jamie Lee Curtis and Stephen Fry in bidding farewell to her.

The music icon shared two pictures of their meetings together over the years on Instagram on the day of her state funeral.

‘Today I’ll be joining the rest of the world in remembering Her Majesty The Queen,’ he wrote. ‘My own memories of her are filled with joy and admiration. The Queen honoured me with a CBE, a knighthood and the Companion of Honour.

‘I was lucky enough to perform at three of her Jubilees. They were always joyous and humbling experiences.’

He then added: ‘But it was the moments out of the public eye that I will most fondly remember her for; dancing together to ‘Rock Around the Clock’ at Windsor Castle or experiencing her great wit, warmth and humour first hand. She served with grace and dedication, and she will be sorely missed.’

Posting a picture of a photo of the Queen nestled among floral tributes and a small Union Jack to her own Instagram account, actress Jamie Lee Cutis simply wrote: ‘Queen Elizabeth II. Family. Service. Country. A perfect image.’

The Queen, pictured here at her Platinum Jubilee celebrations in June, is being laid to rest in Windsor (Picture: Jonathan Brady – WPA Pool/Getty Images)

Sir Elton shared pictures of himself meeting the Queen at various Jubilee events, inlcuding her Diamond Jubilee in 2012, as he paid tribute (Picture: Getty)

Meanwhile, Stephen Fry praised the ‘ritual, ceremony and symbol’ of the Queen’s funeral.

The actor and comedian, 65, tuned in to the service from a hotel room in New York from 3am local time.

He said on Twitter: ‘Watching the #queensfuneral from 3am onwards in a New York hotel room somehow brings me closer to it all than if I were back home.

‘Words can’t compete with such ritual, ceremony and symbol. Think how many jigsaw puzzles will come from this…’

The scond picture showed Sir Elton and David Frost meeting the Queen after a performance in aid of the Queen’s Silver Jubilee Appeal in 1977 (Picture: PA)

Watching the #queensfuneral from …read more