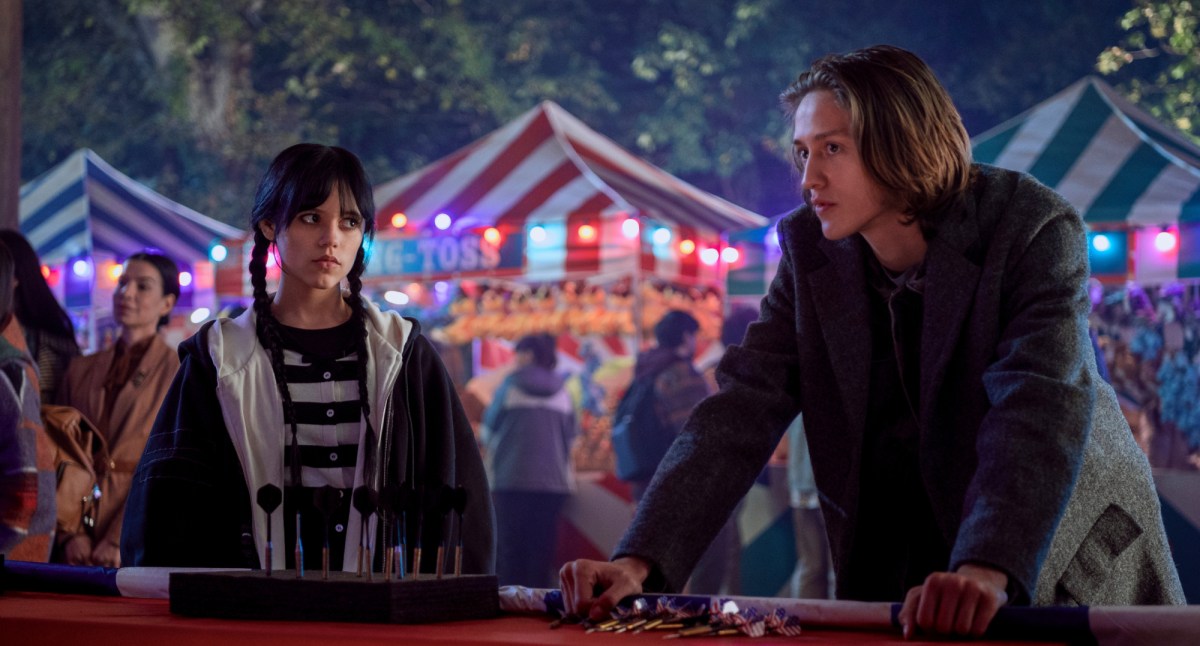 Wednesday Addams (Jenna Ortega) has watched the suffocating affection between her parents. In the Netflix series Wednesday, fans get their dose of love-dovey infatuation between Morticia (Catherine Zeta-Jones) and Gomez Addams (Luis Guzmán). In true Wednesday fashion, she is repulsed by it. But as Wednesday is a coming-of-age story for the macabre teen, she also faces the woes of a love triangle as she solves a few mysteries.

Wednesday’s journey begins when she attends Nevermore Academy, a school especially made for outcasts. Fans soon meet Xavier Thorpe (Percy Hynes White), the “resident tortured artist’ of the school, who once dated the Queen Bee, Bianca Barclay (Joy Sunday). Behind Xavier’s gloomy exterior is a kind soul who can turn his drawing into animate objects. He also lives in the shadow of his famous psychic father.

His and Wednesday’s stories collide when he saves her from getting killed by a falling gargoyle. It is clear as day that Xavier has some feelings toward the dark teen. In the infirmary, he reveals they met as children at his godmother’s funeral. They played hide and seek, and Xavier hid in his godmother’s casket. On its way to the crematorium, Wednesday saved him. Fans already get a small romantic spark.

RELATED: ‘Wednesday’: What Happened to Morticia and Gomez at Nevermore 25 Years Ago? And How It Ties Into the Storyline

But Wednesday also meets Tyler Galpin (Hunter Doohan), a normie who works at the local coffee shop. She helps him fix the espresso machine in return for a way out of town. Unlike others, Tyler is not overly disturbed or scared of how Wednesday is. But he happens to be the son of the local sheriff. Over time, Tyler also shows his interest in Wednesday. Thus beginning an enticing love triangle in the Wednesday series.

While fans saw a small teaser of Wednesday having a love story from the trailers, the series makes it worthwhile. Tyler and Xavier do not hide their feelings for the macabre teen. But seeing as Wednesday is not privy to romance, she has no idea how to handle it. Xavier makes clear flirtatious remarks. He even gets excited when Wednesday invites him to the annual dance, while unaware she used it as a cover to investigate the murder and monster.

Halloween is over but spooky season never ends. pic.twitter.com/5W9amaEg1z

RELATED: ‘Wednesday’: Who Is Goody Addams and How Does She Tie Into the Greater Mystery?

Meanwhile, Wednesday gets closer to Tyler and expresses his feelings for her. But he becomes frustrated that Wednesday does not try to be empathetic or make her feelings for him clear. Her date with Xavier is off when Wednesday suspects him of being the …read more