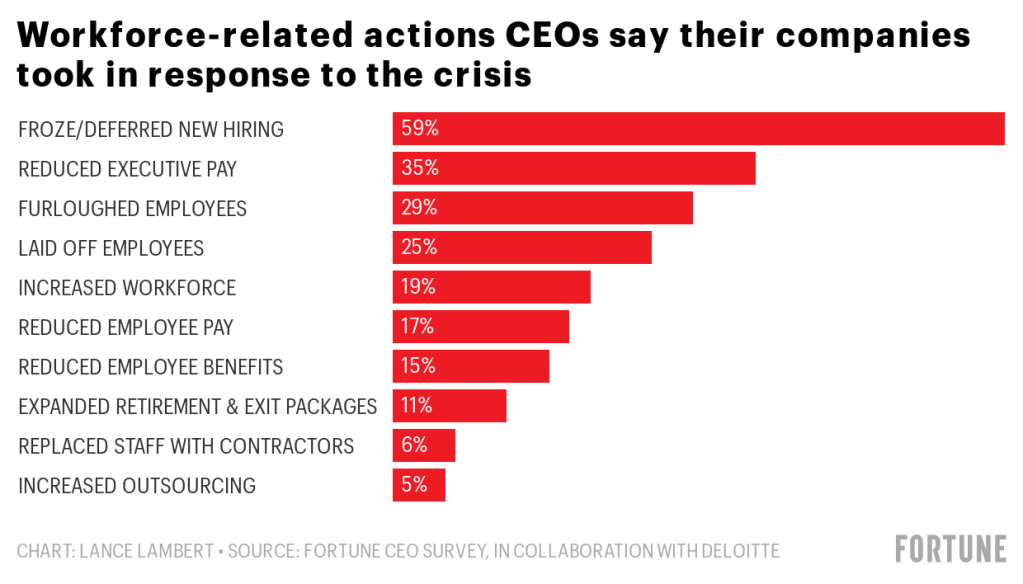 There are 21 million Americans who are unemployed and looking for work. But they’re finding that many employers aren’t accepting any applications.

Around six in 10 CEOs say their company has implemented a hiring freeze or deferred new hiring. That’s the finding from a Fortune survey of CEOs in collaboration with Deloitte. We received 222 CEO responses from June 8 to 12.*

When a recession hits, employers often cut openings, and companies in the worst shape freeze hiring altogether. But this go-round, they turned to hiring freezes almost immediately. Before the end of March countless businesses, including Uber, and state governments, like Ohio and Michigan, had implemented hiring freezes.

Businesses are turning to a lot more than hiring freezes to shore up cash flows. In an attempt to cut costs, CEOs have also turned to decreasing executive pay (35%), reducing employee benefits (15%), and offering voluntary retirement or exit packages (11%).

But a small minority of firms are still growing, with 19% of CEOs saying they’ve expanded hiring since the start of the crisis. Many of the companies that are still hiring are technology firms that are benefiting from stay-at-home orders, which are speeding up the digital transformation. Look no further than Amazon, which has seen its stock climb 46%, to $2,693, since the start of the year on robust orders.

Adobe CEO Shantanu Narayen recently told Fortune that his company, which hasn’t laid off employees during the pandemic, is benefiting from existing digital transformation trends rapidly picking up speed. As U.S. employers lay workers off in masses, Adobe actually reported a record quarterly revenue of $3.13 billion in its fiscal-year second quarter, which ended May 29. That was a 14% year-over-year increase.

This is an excerpt of Fortune Analytics, an exclusive newsletter that Fortune Premium subscribers receive as a perk of their subscription. The newsletter shares in-depth research on the most discussed topics in the business world right now. Our findings come from special surveys we run and proprietary data we collect and analyze. Sign up to get the full briefing in your inbox.