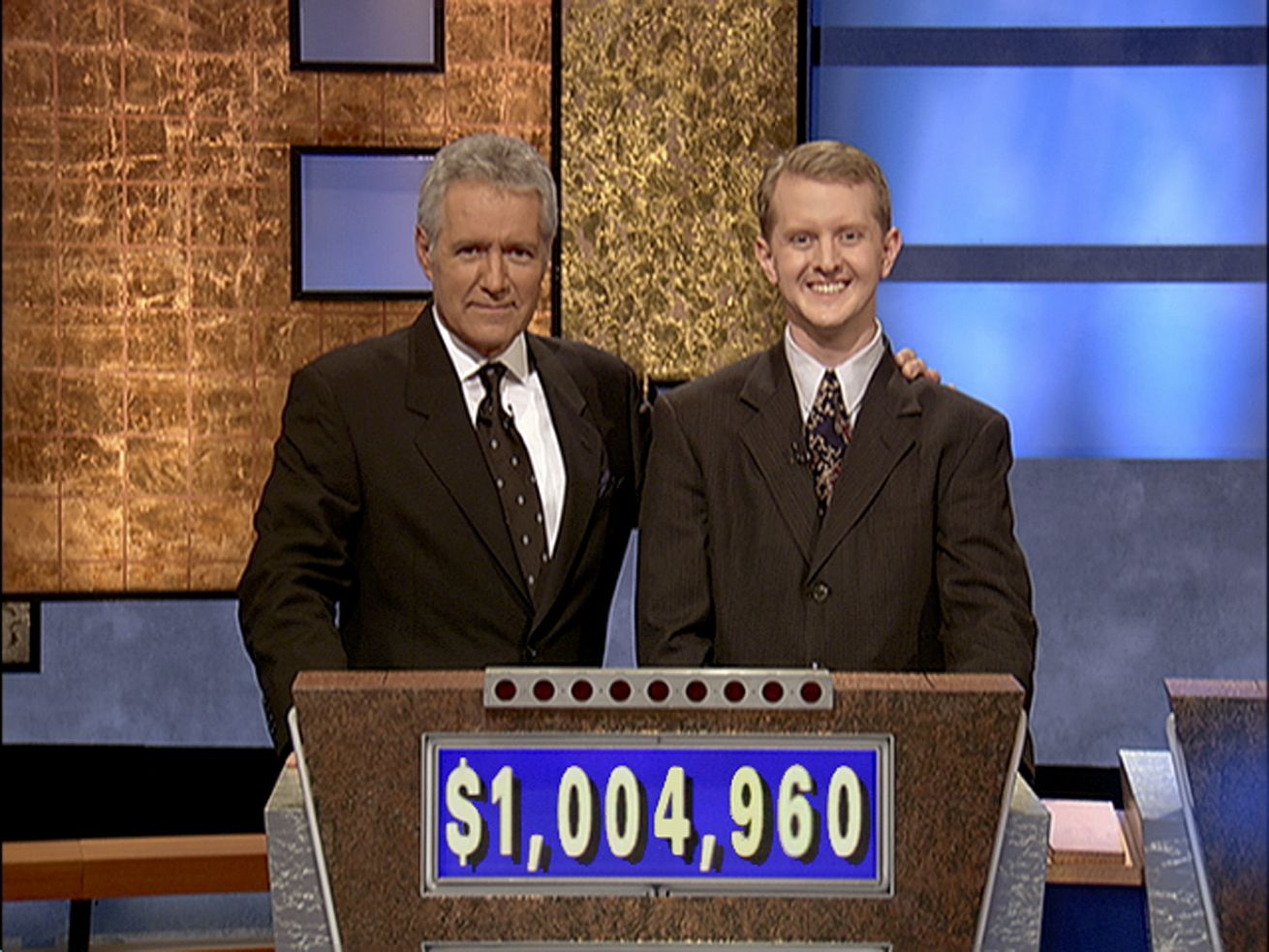 Software developer Ken Jennings from Salt Lake City, Utah, right, poses for a photo with “Jeopardy!” host Alex Trebek on the set of the show Tuesday, July 13, 2004, in Culver City, California. Jennings, who won 74 straight games in 2004, will now be a consulting producer on the show’s 2020 season. | Associated Press

Jennings was on the show for 16 weeks — 37 hours of filming. Trebek said he started running out of questions to ask during the show’s interview segment, and that Jennings even had to start making up some anecdotes.

The 37th season has some noticeable changes. The contestants will be spaced out at their respective podiums. Host Alex Trebek — who is undergoing treatment for stage 4 pancreatic cancer — will stay at his podium instead of going over to the contestants to chat.

And “Greatest of All Time” champ Ken Jennings will appear — this time as a consulting producer, helping to present special clues and categories, among other responsibilities.

Trebek and Jennings have a long history. In 2004 — not long after “Jeopardy!” did away with the five-game rule — Jennings made his debut and wowed fans night after night with his knowledge. The 30-year-old software engineer from Salt Lake City went on to win 74 games, earning $2.52 million.

In his recent memoir, Trebek admitted he was sad when a question about H&R Block finally dethroned Jennings.

“I had tears in my eyes,” Trebek wrote. “It just all happened so quickly. Ken lost. … The show ended. I remember thinking, ‘Ken’s gone. My buddy. My pal. This was getting to be ‘The Ken and Alex Show.’”

INFLUENCER MARKETING 2020: Why brands can't get enough of an $8 billion ecosystem driven by Kardashians, moms, and tweens

Trebek said there’s a common misconception that he interacts a lot with the show’s contestants. But taping five games a day and changing suits between each episode, there’s no time to interact, other than during the actual filming.

But Jennings kept coming back — and so did the viewers. During his run, the show’s ratings increased 22% compared to the same period the previous year, Trebek said.

Jennings was on the show for 16 weeks — 37 hours of filming. Trebek said he started running out of questions to ask during the show’s interview segment, and Jennings would come up with ideas to help him out. The “Jeopardy!” host said it even got to the point that Jennings had to start making up some anecdotes, like how he enjoys airline food.

“We got to know each other and feel comfortable with each other,” Trebek wrote. “He’s somebody I genuinely liked as a contestant on the program.”

To this day, Trebek said he’s still impressed with how Jennings handled his elimination, including giving the woman who defeated him a hug.

“What amazed me was that before we revealed Ken’s answer on his monitor, I didn’t notice anything different about him,” he wrote. “There …read more

Airline workers have lower rates of COVID-19 than the general population — and airline CEOs say it’s proof that flying is safe (DAL, UAL)