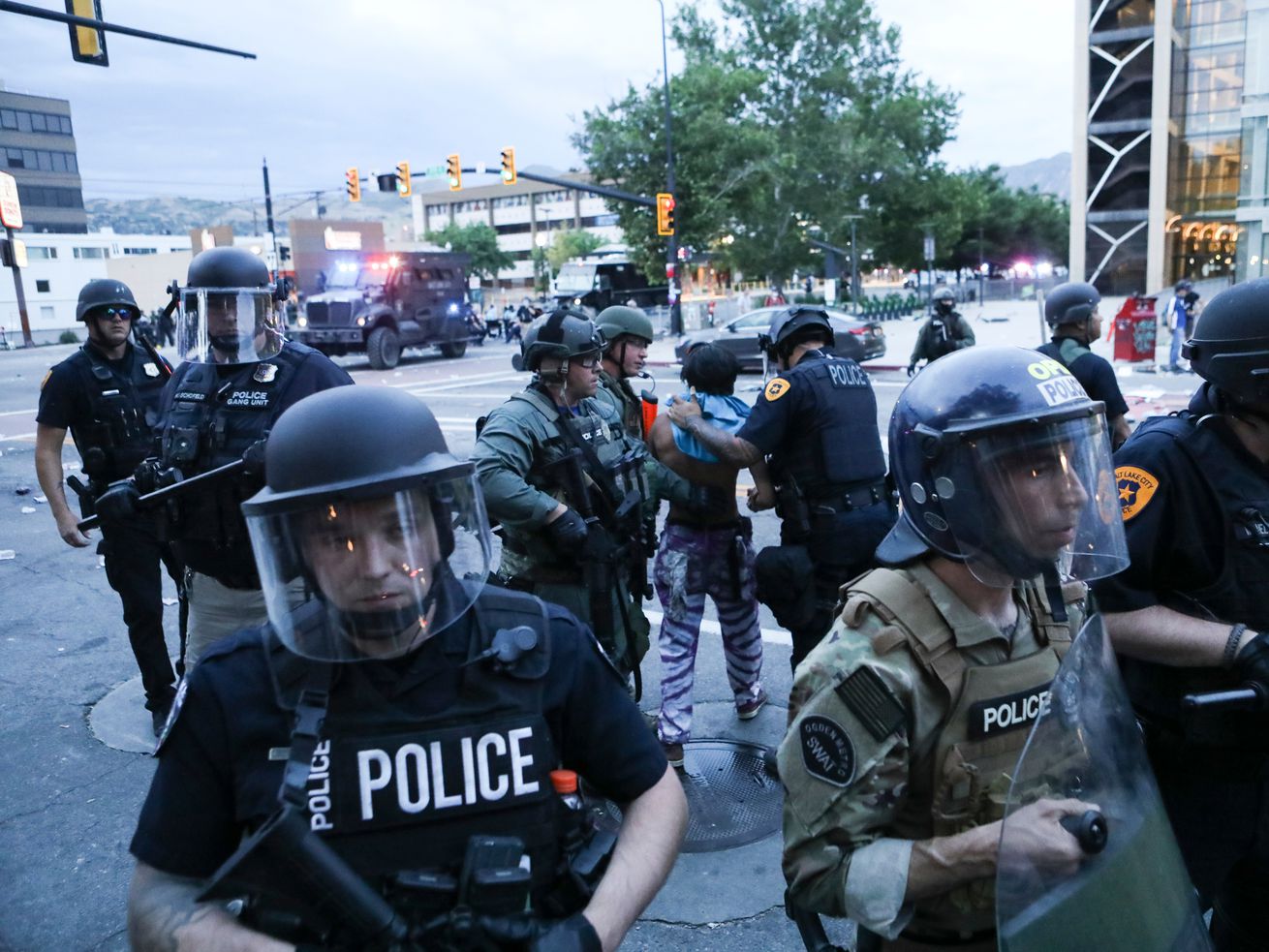 A protester who refused to move when facing off with police while demonstrating against police brutality is taken in by officials in Salt Lake City on Saturday, May 30, 2020. Daylong protests moved across the city Saturday after a peaceful demonstration to decry the death of George Floyd in police custody in Minneapolis turned violent. | Ivy Ceballo, Deseret News

In what he calls “the Minneapolis effect,” Paul Cassell says 710 were killed and 2,800 shot in June and July

SALT LAKE CITY — A University of Utah law professor has drawn a link between a spike in shooting deaths across several large U.S. cities and changes in policing tied to widespread protests against racial injustice.

Homicides and shooting rates jumped across the country in late May and remained high over the next two months, in large part because police departments reassigned officers to protests or pulled back on patrols, keeping them away from their usual anti-gun efforts, said Paul Cassell, a legal expert and former federal judge.

“Ultimately the big picture explanation of the recent homicide spikes is also the simplest one: Less policing focused on gun crimes as a result of the protests and their fallout produced an increase in gun crimes,” Cassell wrote in the paper set to be published in the Federal Sentencing Reporter. He called the surge in deaths “shocking” and said it requires urgent attention.

Under what he calls “the Minneapolis effect,” Cassell estimates reduced policing led to 710 more homicides and 2,800 more shootings in June and July. Those injured or killed tend to live in low-income neighborhoods and belong to racial and ethnic minority groups.

Cassell analyzed police data from several large cities: Minneapolis, Chicago, Philadelphia, Milwaukee and New York City. Chicago, for example, recorded 107 killings in July, up more than double from the same month a year earlier, he said, and the highest in a single month since September 1992.

The pandemic may play a role in the upticks, but it doesn’t explain them, Cassell said.

This year’s spike did not align with the onset of the coronavirus in March but instead began in late May, when demonstrators took to streets across the nation after a Minneapolis officer pressed his knee to George Floyd’s neck for nearly nine minutes even after Floyd stopped breathing.

Even after protests began to wane, police continued to pull back from “proactive policing,” Cassell wrote, like stopping people on foot or in cars and confiscating guns from those carrying them unlawfully. Some were grappling with budget cuts and hits to morale; others a wave of resignations and early retirements.

Chicago and Philadelphia, however, have since deployed special teams to prevent gun violence in certain areas or respond to protests, Cassell noted.

His theory is similar to the Ferguson effect, the idea favored by many law enforcers that they could not properly do their jobs following public outcry over the 2014 death of Michael Brown, shot by police in Ferguson, Missouri.

Staff at chip designer Arm will receive a share of $1.5 billion after the company’s sale to Nvidia, equivalent to $230,000 each

Samsung’s Galaxy Z Fold 2 is the first foldable phone I’d want to buy — if it didn’t cost a staggering $2,000