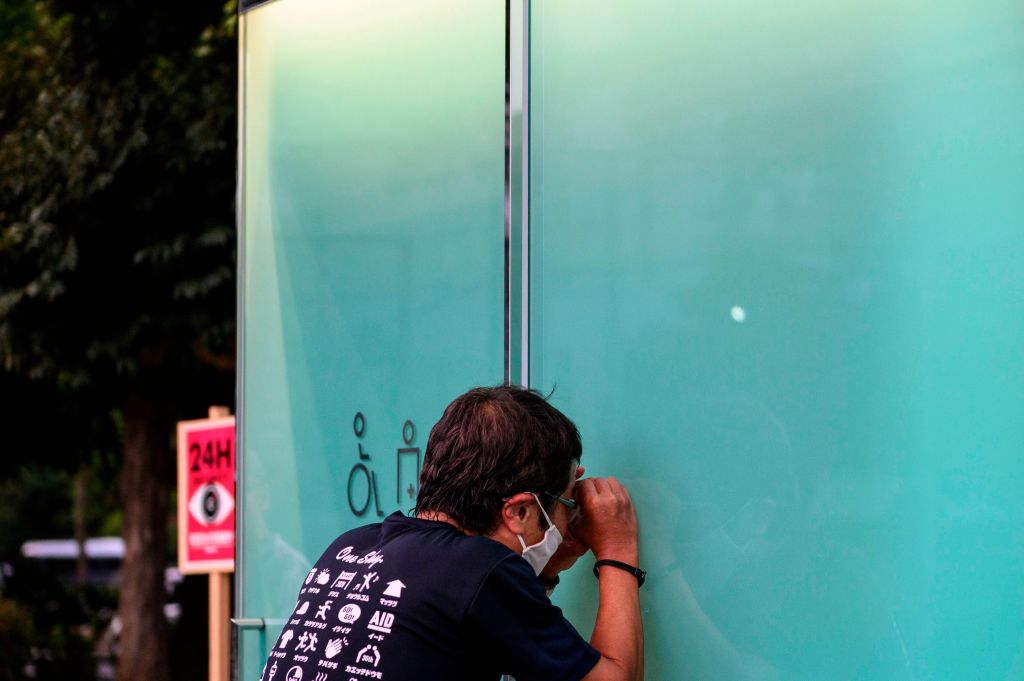 Shigeru Ban, the Pritzker Prize-winning Japanese architect, is renowned as a designer of visitor centers, museums, condominiums, and stylish private residences. He also is acclaimed for his work as a designer of emergency shelters for victims of earthquakes, floods, and war. This year, in conjunction with the now-postponed Tokyo Olympic Games, a Japanese foundation commissioned Ban to apply his prodigious talents to the creation of a lowlier structure: public toilets.

The result, unveiled August 5 in two locations near Shibuya ward’s Yoyogi Park, is attracting global attention. The reason? Ban’s restrooms are brightly lit boxes of colored glass—and completely transparent. Or at least they seem to be at first. The structures are fashioned from “smart glass” that renders them opaque after a user enters and locks the door.

Ban calls these structures “tomei toilets.” (Tomei is the Japanese word for “see-through.”) He says the design presented itself to him as the obvious solution to two questions everyone worries about when using a public toilet: Is it clean? And is it already occupied?

At night, the facilities radiate light “like a beautiful lantern.”

Ban’s glowing boxes are part of the “Tokyo Toilet Project,” a series of 17 public toilets in Shibuya commissioned for redesign by the Nippon Foundation, the philanthropic organization founded by motorboat racing kingpin Ryoichi Sasakawa. Other creators enlisted in the effort include some of the biggest names in the world of Japanese architecture and design: Tadao Ando, Sou Fujimoto, Toyo Ito, Masamichi Katayama, Kengo Kuma, Fumihiko Maki, Nao Tamura, and Kashiwa Sato.

Modern Japan is famed for it’s attention to cleanliness and personal hygiene. And as the Guardian‘s Justin McCurry’s notes, Japan’s high-tech toilets have long fascinated—and perplexed—foreign visitors. Before the pandemic struck, luxury washlets made by Japan’s largest toilet maker, Toto Ltd., were a prized purchase for Chinese tourists visiting Japan.

But the Nippon Foundation, which also will pay to maintain the new facilities, says it wants to dispel misconceptions that public toilets are “dark, dirty, smelly, and scary.” The Foundation describes its goal as using advanced design to create structures that will be “accessible for everyone regardless of gender, age, or disability, to demonstrate the possibilities of an inclusive society.”

Certainly, visitors will be able to relieve themselves in style. The toilet designed by Tadao Ando for Jingu Dori Park is a circular structure with a tilted engawa roof that could pass for a cafe or a luxury boutique. Maki’s toilet in East Ebisu Park features an interior courtyard and graceful curved, white roof that looks almost as if it houses an art gallery.

Does it make sense to lavish this kind of creativity on a commode? Perhaps not. But public toilets have been a focus of human design efforts since the beginning of civilization, and in a sense, are one of the hallmarks of a civilized society. (Fun fact: The earliest known example of multiple flushing lavatories attached to a sophisticated sewage …read more

Men may have a slower immune response to the coronavirus than women, and that could explain their higher mortality rates

POLL: 58% of Americans think the Senate should not fill Ruth Bader Ginsburg’s Supreme Court vacancy until after the election