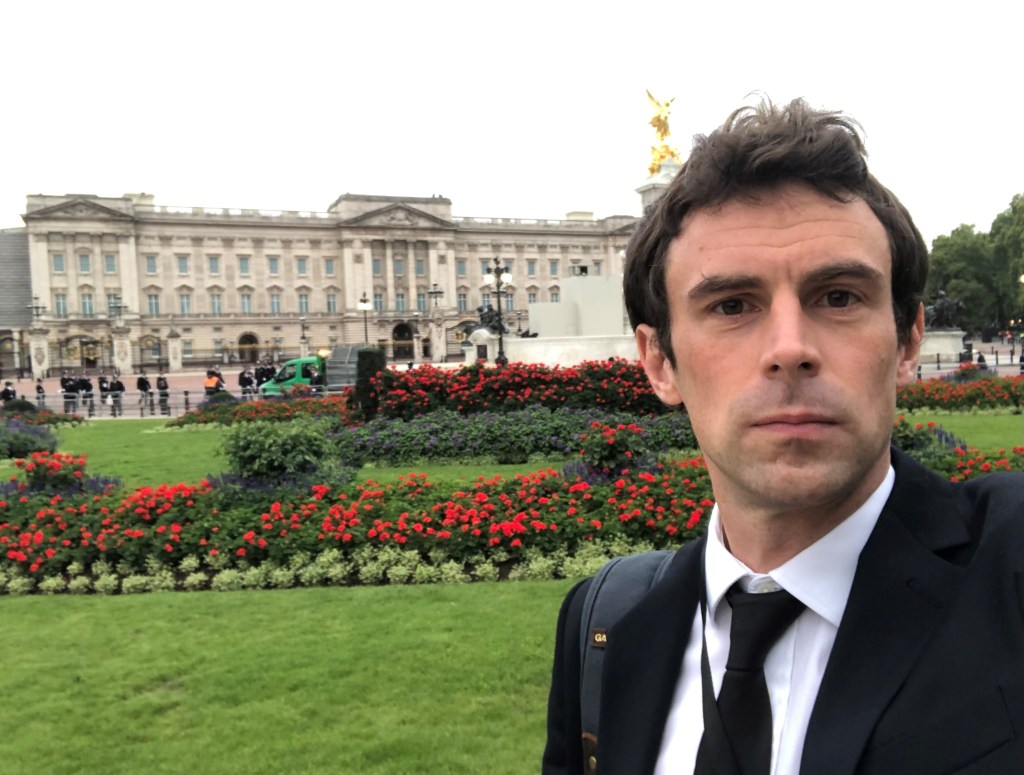 Our correspondent outside Buckingham Palace early on Monday morning as last-minute preparations are made before the crowd is allowed into the area to watch the funeral procession (Picture: Daniel Binns)

‘It’s just a bit surreal,’ mourner Georgia Matthews, 26, tells me as she waits on The Mall for a glimpse of the Queen’s funeral procession.

There certainly is a strange atmosphere among the thousands who have turned out early on a Monday morning to witness a piece of history.

At times, it feels like being at a music festival – as people chat with strangers, endure portable toilets and burst into jokey applause when a security guard dashes into the road to catch a plastic bag that has disrespectfully blown on to the procession route.

There are further guffaws when a street sweeper brushes clean the grand avenue – followed almost immediately by a police horse which relieves itself.

But as the morning wears on – and the reality sinks in that they will soon say their final farewells to Her Majesty – the mood among the crowd in central London grows a lot more sombre.

Crowds of mourners on The Mall queue for access to the viewing point outside Buckingham Palace (Picture: Daniel Binns)

Chatting to some of them, I find there is a strange mix of muted excitement at being present on such a momentous occasion, combined with real upset at the Queen’s death and even fear about what it all means for the future.

At the front of The Mall, people queue to access a small viewing area opposite Buckingham Palace, which won’t open until after 8am.

First in line is bleary-eyed American Melinda McCarthy, who has waited an entire day after turning up to secure her spot at 9am on Sunday – days after she spent 14-and-a-half hours in the lying-in-state queue.

The 56-year-old, of Cape Cod in Massachusetts, says: ‘For me, it’s a pilgrimage, and a part of history. I had to be here.’

Nadia Rigden, 45, has been queuing since 11am the day before with her family, from Whitstable in Kent.

‘My grandfather was in the Household Cavalry and he attended the Queen’s wedding, he rode in the parade,’ she proudly tells me. ‘So we feel a connection to her and really wanted to pay our respects.’

Queen Elizabeth II’s funeral: All the key events as they happened
How the UK’s newspaper front pages covered the Queen’s funeral
More than 250,000 people saw Queen lying in state in first official queue figure
Where has Queen Elizabeth II been buried and can you visit her tomb?
When does the national mourning period end and what will change?