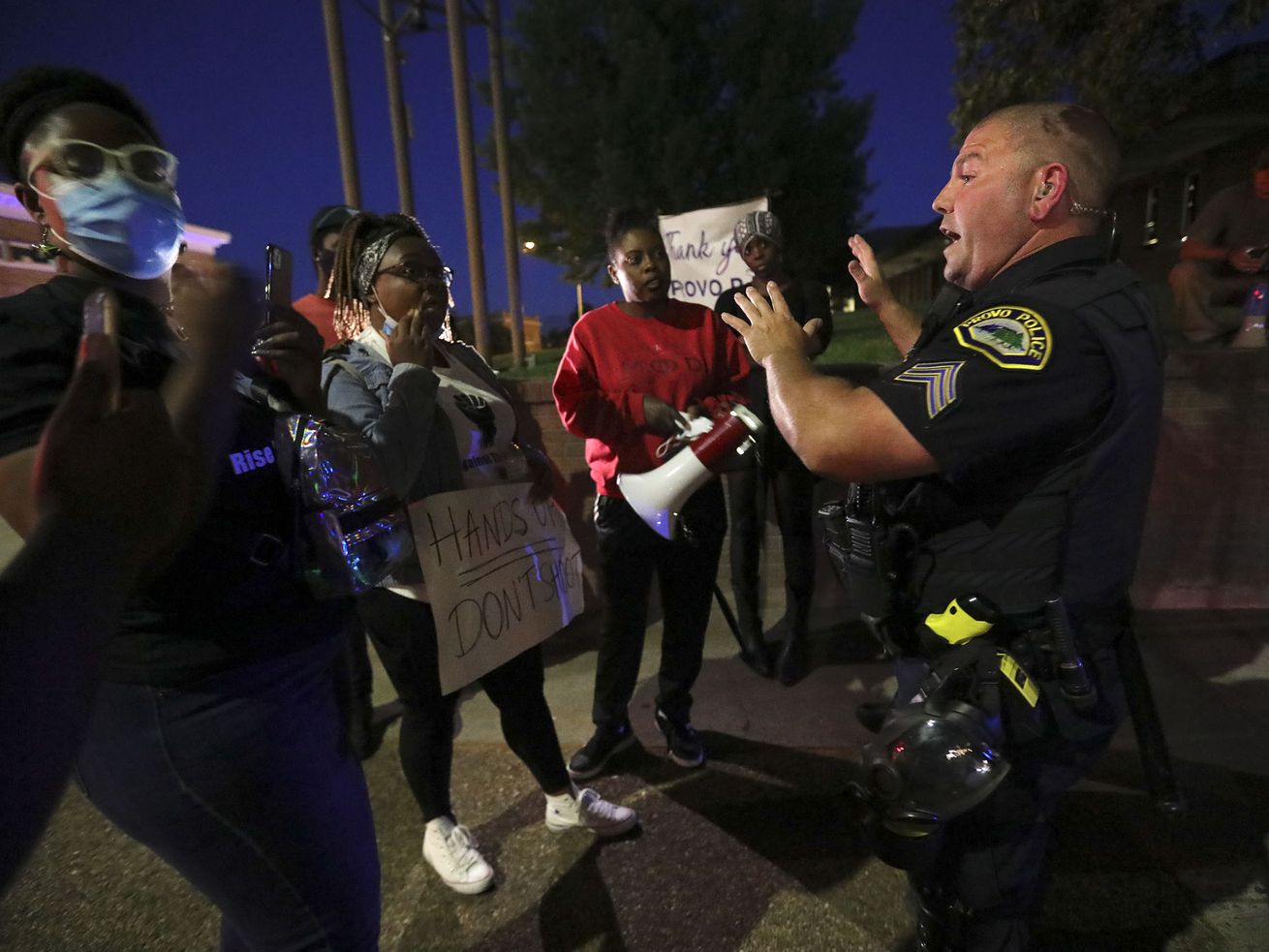 Provo Police Sgt. Palmer talks to protesters during a rally against police brutality and racism outside of the Provo Police Department in Provo on Monday, June 29, 2020. | Kristin Murphy, Deseret News

PROVO — Protests against police brutality in Provo took a tense turn Monday night as a white Ford Excursion pushed through a line of protesters blocking traffic at the intersection of North University and Center Street and a gunshot was reported.

Roughly 100 people took to Center Street on Monday protesting police brutality, the latest demonstration in weeks of protests across the Beehive state. However, what demonstrators say was a peaceful protest appeared to turn violent, with protesters claiming multiple cars tried to ram into them and Provo police investigating the gunshot report.

“Right now we have the reports of some shots being fired, so we’re just looking into that right now,” said Provo Police Sgt. Nisha King.

King also said police were investigating an “allegation of a protester that was struck by a vehicle” who suffered minor injuries.

King did not immediately release additional details about the allegations.

A video of the confrontation with the white Excursion was captured by a Daily Universe student journalist, Lisi Merkley. In the video, the vehicle can be seen pushing through protesters attempting to gather in front of it, picking up speed as it goes while protesters cry out. At least one person falls to the ground before the SUV speeds away.

Another video by KSL-TV shows what appears to be a man in a mask pointing a gun at the passenger side of the white Excursion as it pushes forward. A loud popping sound is heard and a flash is seen from the barrel of the gun.

Betsy Croft, one of the protesters, also witnessed the Excursion pushing through protesters and confrontations with other drivers.

“In the last hour there have been three to four cars that have been trying to run into the groups of people that are congregating at the main intersections in Provo,” Croft said. “This is a peaceful protest so that kind of action is unwarranted and clearly an attempt to be violent.”

Croft said the police presence was initially light, telling the Deseret News, “I think they can recognize that this is a peaceful protest so I don’t think that they’re very concerned about any kind of looting or damage to property or violence.”

At about 9:30 p.m. the scene was still tense, with cars continuing to drive through the lines of people, protesters jumping on cars and hitting windows. Demonstrators marched to the Provo Police Department and were met with officers in riot gear. Amid calls to disperse and threats of arrest from police, protesters chanted “hands up, don’t shoot.”

“People have been hurt, things have been damaged, time to leave,” yelled one officer dressed in riot gear.

A protest organizer took to a megaphone and urged everyone to peacefully disperse, yelling “If you support our movement you will …read more

Publisher of news outlet arranged for wife to have unpaid position in Melania Trump’s office: report

President Trump couldn’t answer a question about what he’d do in a second term. Here’s his rambling response in full.

Don’t arrest anti-maskers. There’s a better way to handle them.