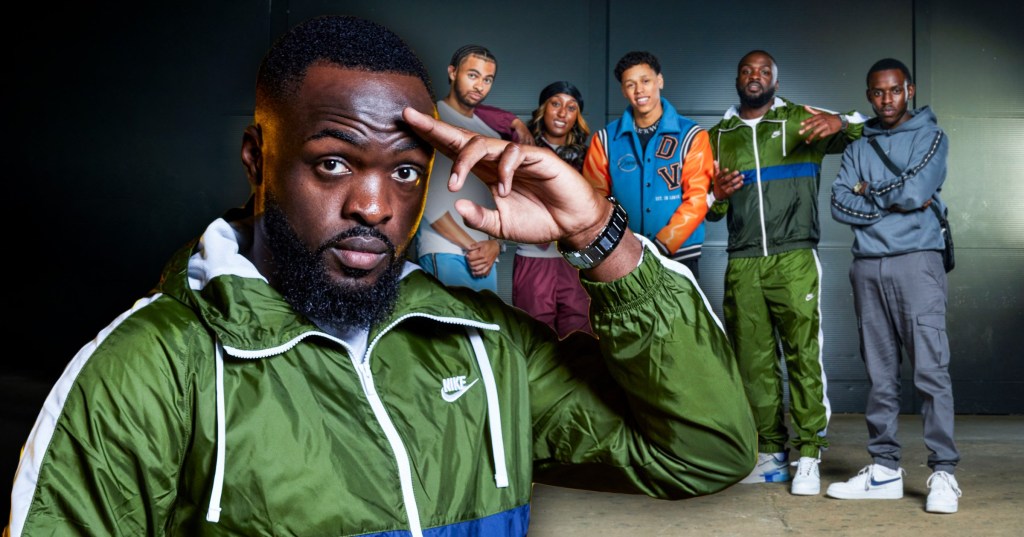 Big Jest triumphed in series four of The Rap Game after joining five other hopefuls vying for the £20,000 cash prize and title (Picture: BBC)

A journey that began in the school playground turned into a rapper fulfilling his late dad’s wishes by lighting up the industry in front of one of the nation’s leading rap DJs.

Big Jest won BBC Three talent show The Rap Game after baring his soul in front of Kenny Allstar in the final episode with a raw and deeply personal reflection on life, loss and ambition.

The wordsmith’s creativity has earned him the tag of ‘Punchline King’ but he showed his versatility during challenges which included the final, one-take recording with the Radio 1Xtra DJ.

His dad had encouraged him to send his music to the rap music heavyweight and to audition for the show, which gives unsigned artists the chance to win £20,000 and launch their own music.

When the adrenaline-inducing moment came, the 27-year-old, from Croydon, south London, overcame ‘cup final nerves’ to deliver one of the standout moments of the four series to date.

‘There was an energy in the room, definitely,’ he tells Metro.co.uk.

‘At the time when you write something that personal it’s a good feeling, because you feel like you’re venting, it’s how we express ourselves.

‘When you rap in front of people on a show there’s a different feeling when you rap on that kind of platform.

‘There was a bit of an adrenaline rush and cup final nerves at being in that situation. There was definitely an energy in the room, it felt like a moment.’

Big Jest impressed with his wordplay as he scored highly throughout series four of The Rap Game (Picture: Naked/Rachel Joseph)

Big Jest saw off the competition from challengers including Mwangi (left) and J Clarke on The Rap Game (Picture: Naked/Trevaughn Omari)

As a teenager, the rapper’s parents were heavily involved in his pursuit of a career in music, which included paying for his studio time.

His dad was a huge fan of Kenny Allstar and The Rap Game, and encouraged his son to send in his music to the DJ and enter the reality TV show.

‘Like most of us, I started rapping at school in the playground, the original training ground where we start, and as for the wordplay, that could be partly to do with music I liked at the time,’ Big Jest says.

‘I was very good at English, so it was just something that came naturally to me, I can’t say it was a deliberate thing.’

Blessed with a wide vocabulary, his tapestry of bars on the show ranged from fiery notes on ‘mental hell’ to a playful line about being gone with the cash like Meghan and Harry.

Taking the mic in front of Kenny Allstar, Big Jest’s track began with a soft voice note from his dad in 2020, where his guiding light speaks with him about sending tracks to the DJ.