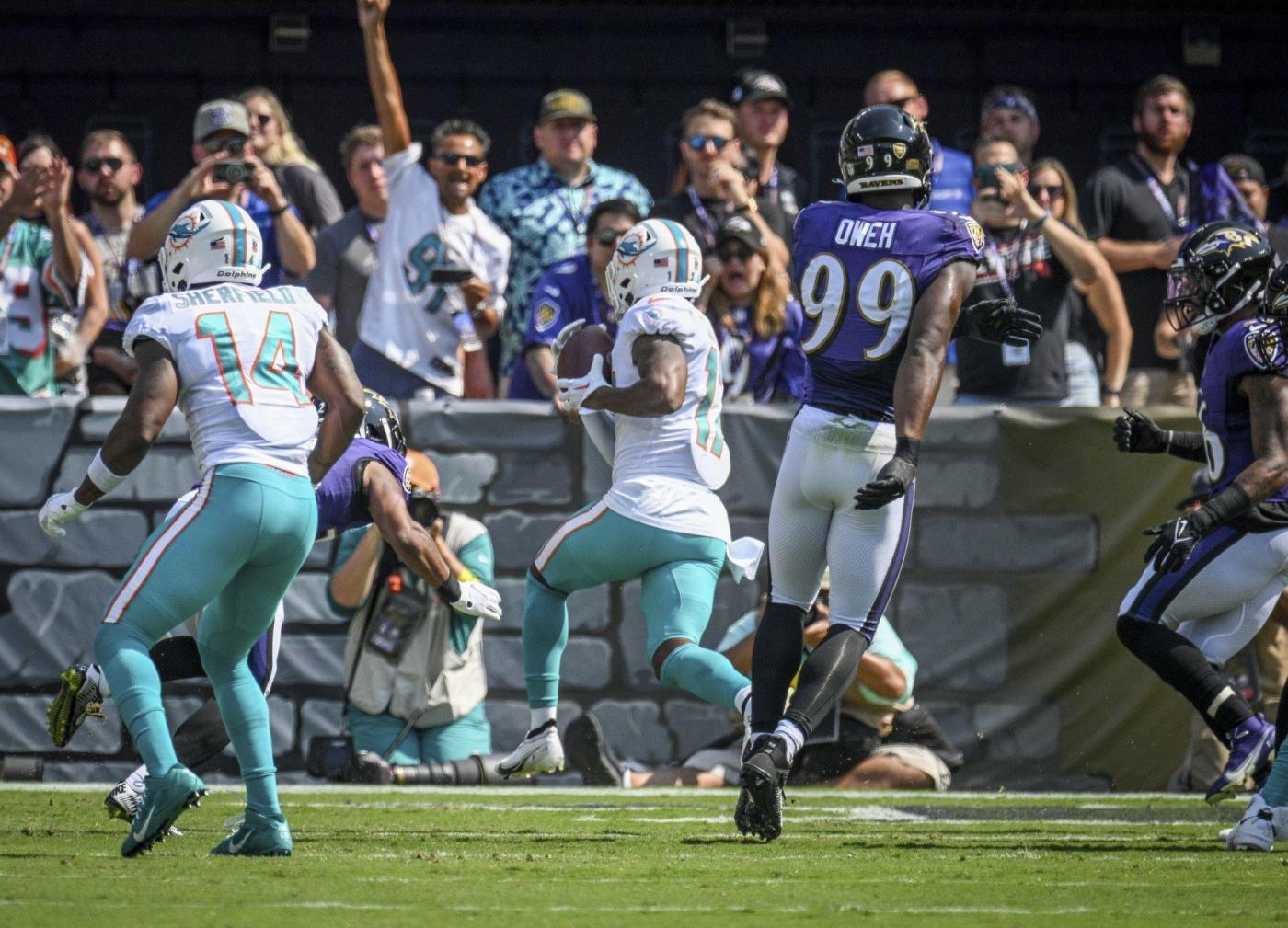 The Ravens’ collapse Sunday was so swift, so decisive, so all-consuming that it felt inevitable even before it was complete. The Ravens were up big, and then they weren’t. They had a field-goal lead with just over two minutes remaining, and then their backs were to their goal line. They had Miami Dolphins quarterback Tua Tagovailoa double-clutching, and then their lead was gone.

By the end of the Ravens’ 42-38 loss inside M&T Bank Stadium, so much had gone wrong that it was hard to remember just how much had gone right for three quarters. A nightmarish fourth quarter seemed to unfold in slow motion, descending deeper into chaos with every drive, every play fraught with the possibility of worse coming to worst.

It takes a special kind of struggle to blow a three-touchdown lead, to waste a historic afternoon from quarterback Lamar Jackson, and the Ravens obliged. Their short-yardage rushing attack and late-game offense fizzled. Their pass rush never materialized. Their secondary took on even more injuries, blew coverages and made a middling quarterback look like Dan Marino.

Dolphins wide receiver Jaylen Waddle’s 7-yard touchdown catch with 14 seconds remaining turned the Ravens’ early dominance into dust, just a haunting memory of one of the worst losses in franchise history. Only once before, in 1997, had the Ravens blown a 21-point lead.

“It’s going to be one of the biggest comebacks probably in the history of the National Football League, and we’ll give them credit for it,” coach John Harbaugh said after the Ravens became the first NFL team in 12 years to lose a game in which they led by at least 21 points. “We have to own it, every single person. I told the guys in the locker room, ‘How we respond to this, that will be the story.’ …

They were the better team for 45 minutes. They certainly had the better quarterback for 45 minutes. Jackson entered the fourth quarter with a perfect passer rating and the game’s defining highlight, a career-long 79-yard touchdown run that extended the Ravens’ lead to 35-14. Jackson finished with 437 yards of total offense and four scores, becoming the first player in NFL history to run and pass for a touchdown of at least 75 yards in the same game.

With Miami’s heavy-pressure looks finally figured out, Jackson and the offense had cruised for much of the afternoon, redeeming a forgettable night and stunning upset in Miami Gardens, Florida, a year ago. The Ravens scored a touchdown on six of their first eight possessions, and one of those drives came within a yard of making it seven scores. When Miami crossed midfield as the third quarter ended, …read more

Miss Manners: Must I accept my host’s definition of wine?