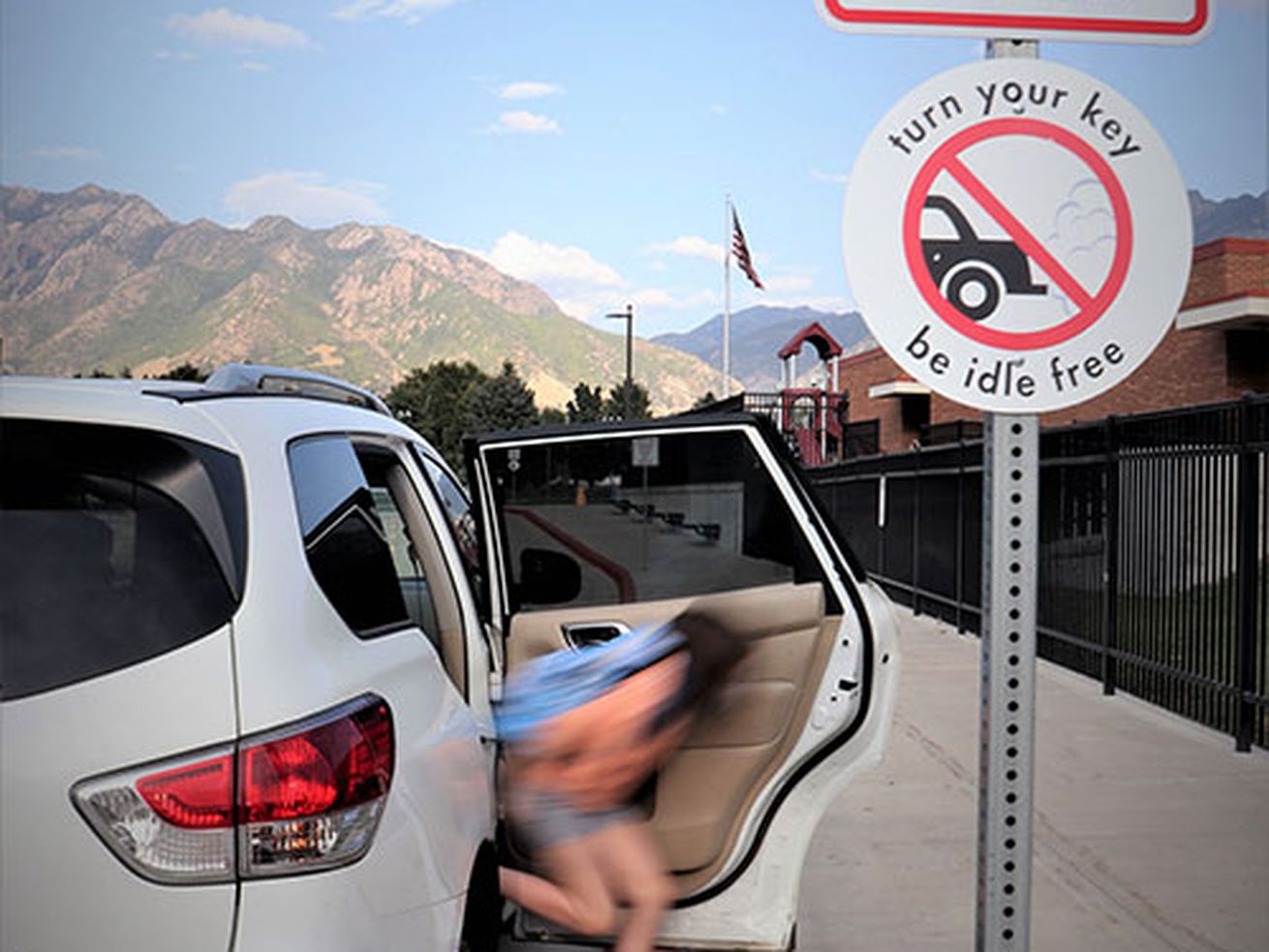 A girl is dropped off next to a sign reminding people to turn off their vehicles while they’re parked. | Vincent Horiuchi

SALT LAKE CITY — In the middle of a historically active wildfire season — where large amounts of carbon dioxide, brown and black carbon and ozone are pouring into the atmosphere — the Utah Clean Cities Coalition wants to remind people that there is something they can do to help keep the air clean.

And it only takes a few seconds.

Turning off the ignition of an idle car is a simple act with potentially large benefits, said Tammie Bostick, the executive director of the coalition. It is a message she hopes to share, particularly in the month of September, which marks the 13th anniversary of the Idle Free Declaration issued by the Utah governor.

The document acknowledges the hazards of idling and applauds Utahns’ efforts to curtail the practice. Still, idling remains a prominent issue worldwide.

Six billion gallons of fuel are wasted each year due to vehicle idling, and personal vehicles release around 30 million tons of carbon dioxide while doing so, according to the U.S. Department of Energy.

“On average, people spend about 7% of their time idling,” said Kerry Kelly, an assistant professor of chemical engineering at the University of Utah. “And the other thing that is not good about idling is that it wastes fuel, one, and then, two, your car’s emission control system does not work optimally while it’s idling.”

To draw attention to the issue, more than 70 Utah mayors have signed their support of idle-free practices, and 10 Utah cities have idle free ordinances.

A local research team — of which Kelly is a part — is going even further to stop the practice.

The real-time speed limit displays — the ones that tell people how fast they’re going — are effective, according to researchers, but probably not for the reasons most think.

“One of the major reasons is they show you that you’re speeding in a way that others can see you’re being shown that you’re speeding, so it’s a violation of what’s called social norm,” Kelly said. “In my terms, it is maybe a little bit of peer pressure to make good choices.”

The signs started Kelly thinking, along with her fellow researcher Gregory Madden, a USU professor in the psychology department. What if they were to do something similar for idling?

Idle free campaigns have existed for years and adding a dynamic component to try and change people’s behavior is an exciting new possibility, previously not possible due to a lack of technology. If the scientists’ hypothesis is correct, and these signs produce results similar to those of dynamic speed signs, they could have a lasting impact.

“Long-term studies of those signs have looked at, you know, to what extent do they reduce accidents and reduce speeding and those kinds of things,” Madden said. “And the effect seems to last as long as those signs …read more

Only a quarter of UK businesses say they are ready for Brexit, with less than 4 months to go