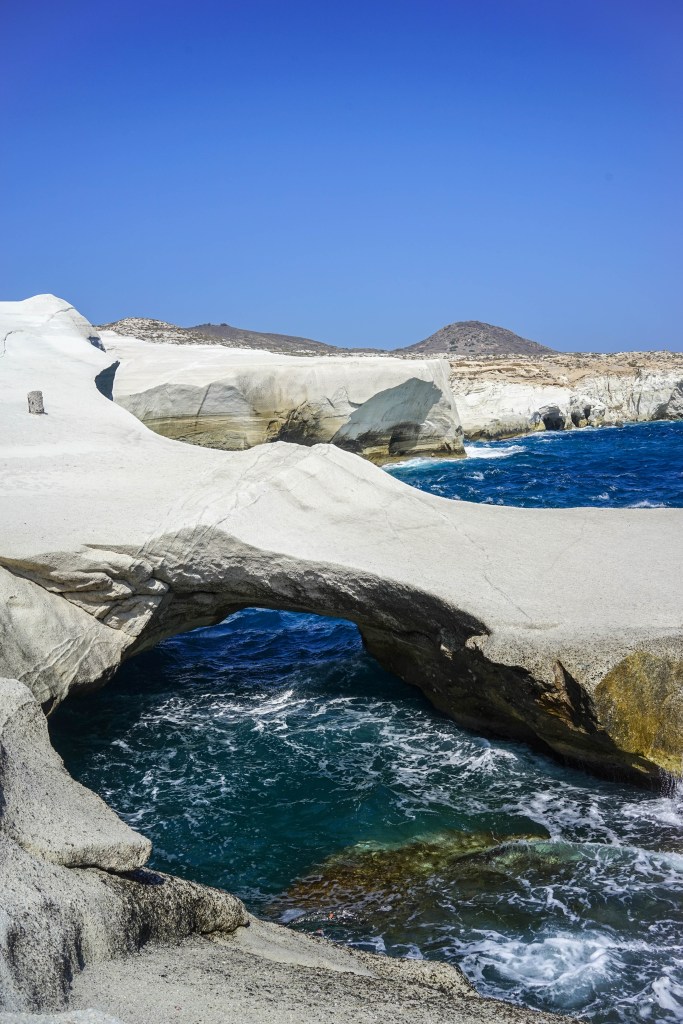 The
winds of Milos determine each day. Strong winds encourage a joyride along the
island’s unmarked roads or add comedy to a meal when bottles of olive oil tip
over after a boastful gust. Calm winds beckon sea adventure as sailboats poke
in and out of remote coves that were once the stomping grounds of pirates, and
divers jump from catamarans for a swim to secluded beaches.

Milos, located among the Cyclades islands of the Aegean Sea, is but a whisper to Mykonos and Santorini. With merely 5,000 residents, Milos is small. But with more than 70 beaches and a handful of villages to explore, it’s ideal for getting lost, cherishing lunch under bougainvillea, and savoring the zip of a Freddo Espresso.

It’s
an island whose civilization dates back to the Mesolithic period and has
wavered through millennia between wars. The volcanic landscape, rich with
minerals, fostered a prosperous mining trade. Its craftsman, sculptors, and goldsmiths became synonymous with Milos
art, with the most prized export being unearthed by a farmer in the 19th
century, the Venus de
Milo. Found near the catacombs in the village of Tripiti, it became
one of the world’s most beloved sculptures, representing Aphrodite, the Greek
goddess of beauty. It now resides in the Louvre museum in Paris, but Milos is petitioning
for its return.

Today,
Milos is a bit unscathed from the tourist footprint. While throngs of island
goers flock to its neighbors, Milos remains slow. Rush hour there is a result
of too much coffee rather than traffic, and its mellow existence is its appeal.

Sarakiniko Beach is on the north shore of Milos and has lunar-like qualities.Danielle BernabeWhat to do

On
Milos, renting a car or scooter gives freedom to explore its many beaches and
villages with point and stop spontaneity. Phone service is not too reliable,
and most roads are unmarked, so sharp map-reading skills are recommended.

While there many playas to discover, Sarakiniko Beach, which is often likened to a moonscape, flaunts white volcanic rocks shaped and formed by centuries of forceful tides. Make this a first to-do of the day to avoid large crowds, and if time permits, drape a blanket down for a picnic.

A side street in Plaka.Danielle Bernabe

Meandering the villages will provide of taste of history, blue and white architecture, and cuisine. Plaka, the main town, is an endless abyss of slim cobbled walkways that ascend and descend like a pleasurable hike. Lined with restaurants, artisan shops, and clotheslines displaying aprons and linens, it’s a snapshot of quintessential Greece. Visit the catacombs in Tripiti on your way to Klima, a fishing village where local grandmothers are seen trading ingredients for dinner and teens strut their best diving techniques off the pier. Pollonia, along the northeast coast, is shaded by tamarisk trees and packed with waterfront cafés. Take a stroll or sit for a Freddo Cappuccino (or espresso)—shaken over ice to achieve a cloud of chilled, frothed milk—while watching fishing boats bobble in the sea.

When winds are tempered, hire a skipper or join a day cruise to sail to witness Milos’s many bays and grottoes …read more

Trump wants to leave his stamp on federal buildings