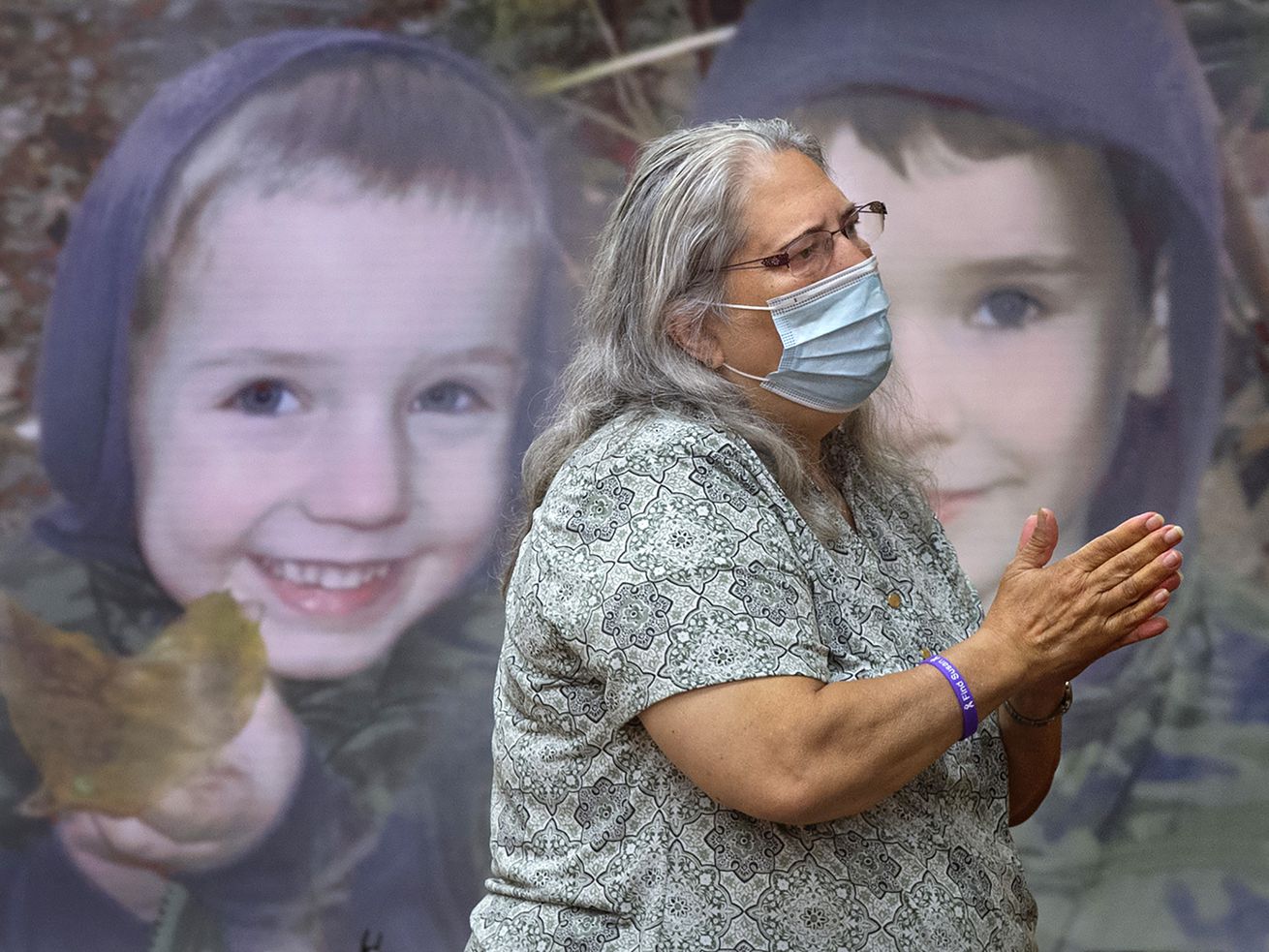 Judy Cox, the mother of Susan Cox Powell, stands in front of a photo of her late grandchildren, Braden and Charlie Powell, during a break in the family’s wrongful death civil trial against the State of Washington in Pierce County Superior Court in Tacoma, Wash., on Wednesday. A jury has found that Washington state officials were partially responsible for the deaths of missing Utah woman Susan Cox Powell’s children at the hands of their father. | Associated Press

TACOMA, Wash. — A jury has found that Washington state officials were partially responsible for the deaths of missing Utah woman Susan Cox Powell’s children at the hands of their father.

The News Tribune newspaper in Tacoma reported that jurors on Friday awarded $98 million to the estates of Charlie and Braden Powell.

Josh Powell, who lived in West Valley City before moving to Pierce County, Washington, was a suspect in the presumed killing of his wife in 2009. Her body has never been found. On Feb. 5, 2012, he killed their two young sons, Charlie and Braden, and himself in an explosive house fire. The boys were visiting Josh Powell at his home on a supervised visit with a social worker when they were killed; Powell had locked the social worker outside.

Susan Powell’s parents, Judith and Charles Cox, alleged in a wrongful death lawsuit that Washington’s Department of Social and Health Services did not do enough to keep their 7- and 5-year-old grandsons safe. The Coxes were in a custody fight for the boys when Josh Powell killed them.

The trial started in Pierce County Superior Court in February and was interrupted by the COVID-19 pandemic. Jurors had begun deliberating Thursday.

Associated Press
Attorneys prepare for closing arguments in the wrongful death civil trial in the murder of Braden and Charlie Powell in Pierce County Superior Court in Tacoma, Wash., on Wednesday.

Ted Buck, an attorney for the Coxes, argued during closing arguments on Wednesday that state workers weren’t properly trained on policy regarding parental visits in domestic violence situations.

He said “none of this would have happened” had state policies and common sense been followed, pointing to a social worker who recognized Josh Powell as an abduction risk without informing the judge overseeing the custody dispute.

Assistant attorney general Joseph Diaz said in his closing argument the boys’ deaths were unquestionably tragic, but that experienced state workers took the custody matter very seriously. He said the department tried “to do what’s best for both those boys, at the same time recognizing that Mr. Powell had rights.”

“Mr. Powell is the sole cause of the murder of his sons,” Diaz told the jury. “There was not any negligence by the state of Washington.”

Josh Powell had moved to Puyallup, to his father Steven’s home, with the boys following his wife’s disappearance in December 2009 from their West Valley home. But investigators looking for clues to her whereabouts searched that …read more

Trump suggested Republicans could reduce unemployment benefits to an estimated $175 each week. That would cause 30 million jobless Americans to lose up to half their income.

USDA identifies 14 of those mysterious seeds from China

How to share files on Google Drive in 3 different ways, and choose who can view, comment, or edit