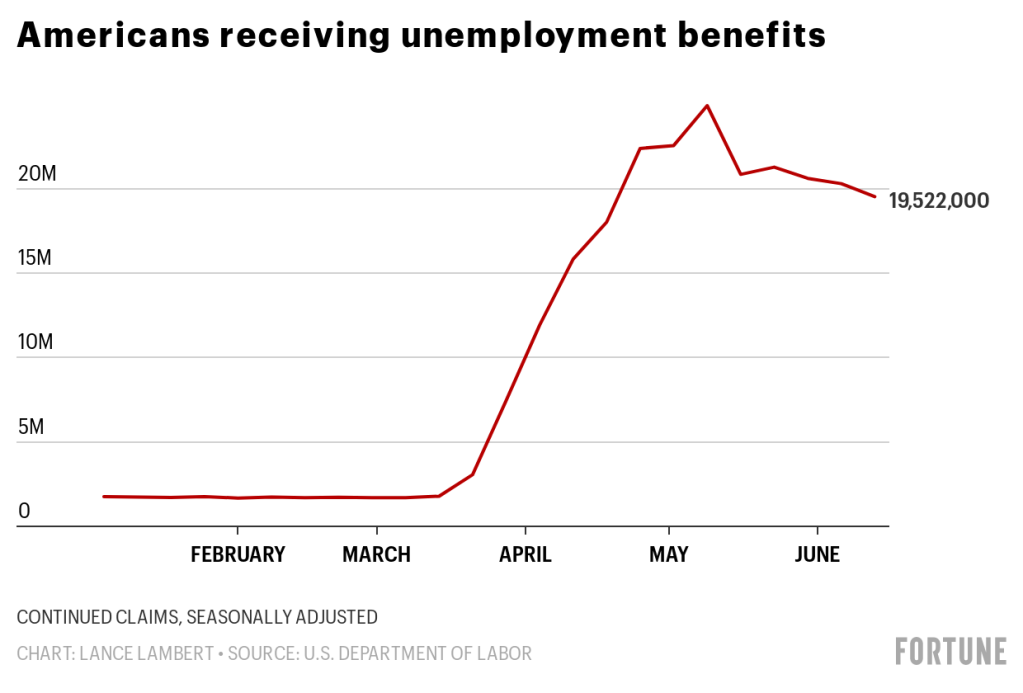 The CARES Act passed in March set aside an additional $600 per week in unemployment insurance (UI) as a financial cushion for the tens millions of Americans who would soon lose their jobs during the pandemic.

Americans receive the extra $600 per week in unemployment benefits on top of their state benefits. But that extra $600 benefit recedes at the end of July unless the federal government extends it.

That means millions of Americans are about to take a $600 weekly—$2,400 per month—cut in pay. That financial blow to unemployed American’s finances comes as the unemployment rate sits at 13.3%, and 59% of CEOs tell Fortune they’ve implemented hiring freezes since the onset of the pandemic. Despite an improving economy, it’s still a terrible time to be looking for work.

Here’s what jobless Americans need to know before the $600 federal unemployment bonus ends in July.

The $600 benefit is available for weeks ending on or before July 31, according to the U.S. Department of Labor. That means the last week jobless Americans are eligible for the benefit is the week ending Saturday, July 25.

That comes as a surprise to many jobless Americans: Several states’ websites had incorrectly listed the week of July 31 as the final week of the benefit. Some states, including New York, have since corrected that error.

I’m still waiting on my claim, can I get back-paid the $600 weekly bonuses?

Eligible individuals will receive retroactive payments of the $600 weekly federal unemployment benefits, in addition to their state benefits, based on their determined date of eligibility. Americans still stuck in unemployment backlogs can get these retroactive checks, going back as far as March 29 for the $600 bonus. Several jobless Americans have told Fortune they received the retroactive money in one lump sum check after their application was approved.

Will there be an extension of the extra $600 in unemployment?

In May, Democrats in the House included an extension of the benefits through January 2021 in the $3 trillion relief package they approved. But that bill is opposed by Senate Republicans. And it is looking unlikely an extension will get passed before the end of July.

Many on the political left see extending the unemployment bonus as critical to keeping families and the economy stable through the pandemic. Meanwhile, many …read more

Why a $685 e-scooter was my best quarantine purchase