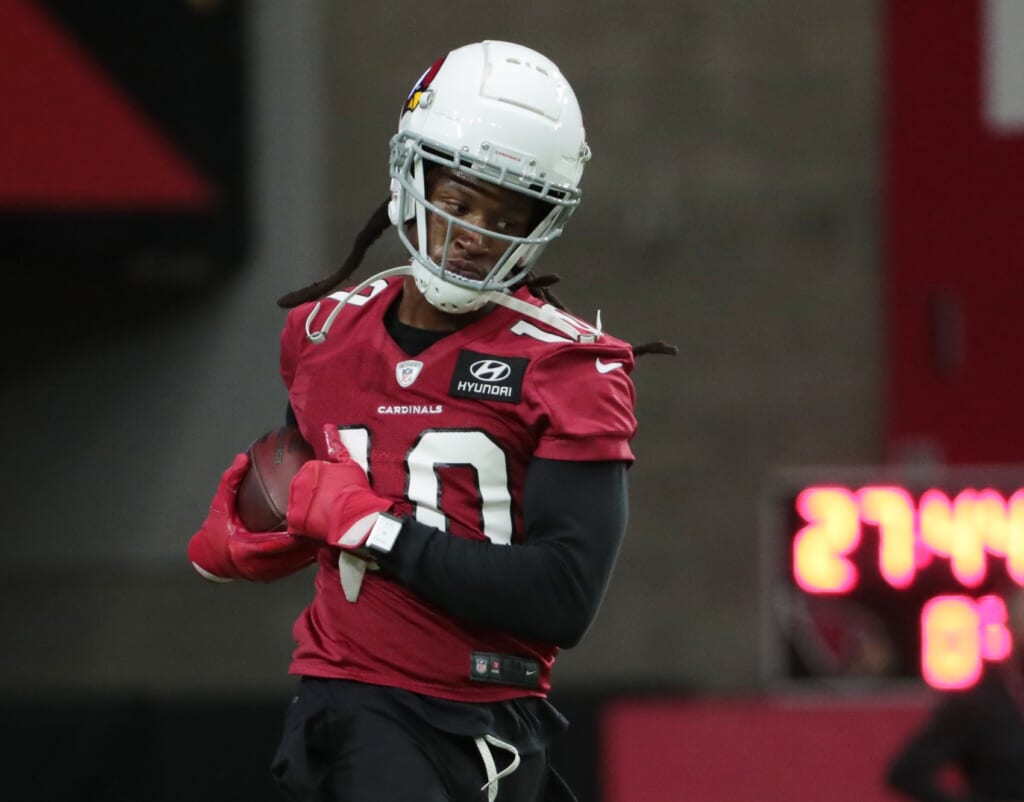 The Arizona Cardinals promised DeAndre Hopkins a contract extension after their blockbuster trade for the All-Pro receiver. On Tuesday, with the 2020 NFL season fast approaching, they delivered on their vow.

Hopkins, who Arizona acquired from the Houston Texans in March, wanted a new contract that would make him the highest-paid wide receiver in the NFL. Following extensive negotiations with his new team, he got everything he wanted and more.

While many around the league blasted the Texans for trading Hopkins, general manager and head coach Bill O’Brien seemingly moved the team’s top weapon due to contract demands. While Houston wouldn’t give Hopkins what he wanted, the Cardinals were happy to make that investment into their offense.

According to NFL Network’s Ian Rapoport, Hopkins will become the highest-paid, non-quarterback in NFL history. The All-Pro receiver is signing a two-year extension worth $54.5 million in new money, which comes with $42.75 million guaranteed.

Coming into the 2020 season, Hopkins was still under contract for $12.5 million in 2020 and was owed $27.4 million over the final two years of the deal. With a new agreement signed, the total value will now become a five-year, $94 million contract.

While the deal falls below the massive extensions Michael Thomas and Julio Jones signed, with Hopkins’ $18.8 million average salary ranking fourth in the NFL, the new deal provides him with plenty of benefits.

Hopkins received a $27.5 million signing bonus as part of the agreement and will hold a no-trade and no-franchise tag clause, per Rapoport. He will also have the choice to void the final year of his contract before the 2024 season, which would still lead to him making $39.585 million under this extension.

It’s a massive sum to pay for a wide receiver, but reflects Arizona’s commitment to its core. The Cardinals recently made Budda Baker the highest-paid free safety in NFL history, too.

Hopkins, the No. 27 overall pick in the 2013 NFL Draft, has emerged has one of the league’s top receivers. Even before Deshaun Watson arrived in Houston, the 6-foot-1 receiver posted gaudy stats and routinely made incredible plays. Now with the Cardinals, he’ll have a chance to make even more magic happen.

It became evident during Kyler Murray’s rookie season that he needed a No. 1 receiver and head coach Kliff Kingsbury needed a game-changing weapon in his offense. So, when Arizona learned an All-Pro talent was available, it struck quickly.

Entering his age-28 season, Hopkins has been named first-team All-Pro in each of the past three years. He also led the NFL in receiving touchdowns in 2017 and led the NFL in consecutive catches (225) without a drop, per Pro Football Focus.

Hopkins is coming off three consecutive seasons with 1,100-plus receiving yards. While he only found the …read more