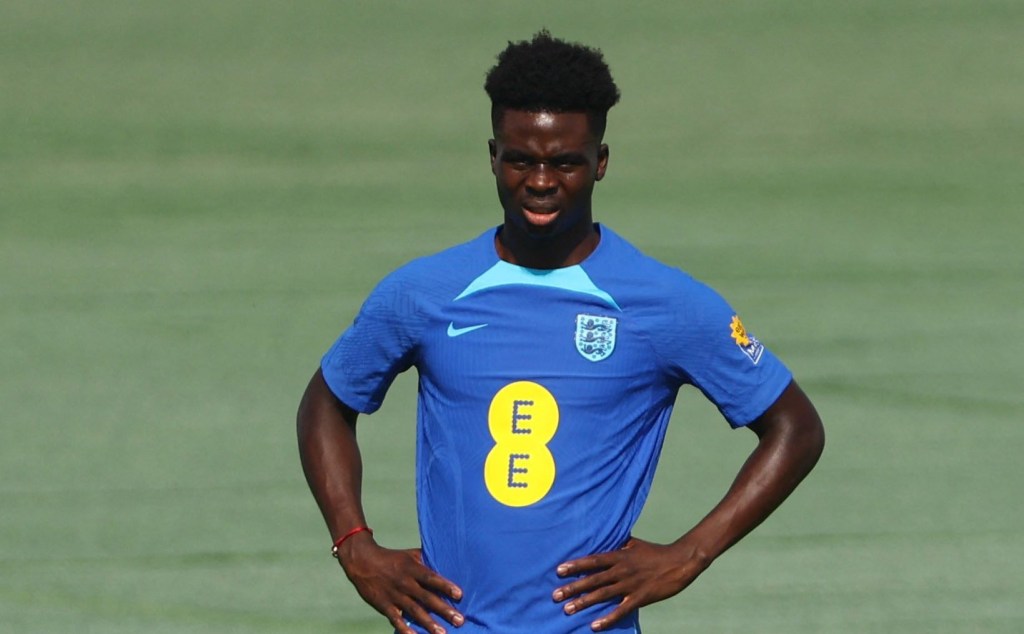 The Three Lions begin their tournament in Qatar in Monday’s early kick-off at 1pm GMT.

Gareth Southgate has a wealth of attacking options at his disposal for England’s first game in Group B and widespread reports are claiming that Saka will be the preferred choice ahead of Manchester City’s Phil Foden in attack.

Saka has been in sublime form for Premier League leaders Arsenal this season, with four goals and six assists in 14 games so far.

It’s also understood that Southgate will start England’s World Cup campaign with a back four, with Harry Maguire expect to start in central defence despite his lack of playing time for Manchester United this season.

Both James Maddison and Kyle Walker have already been ruled out for the match against Iran due to injury.

Speaking about Maddison’s fitness on Sunday, Southgate said: ‘He hasn’t been able to train, so that is a slight concern.

‘The longer that continues, the longer it will take him to be available for the matches.

Who are the BBC and ITV World Cup 2022 presenters and pundits?

Which Premier League players will miss the World Cup with injury?

When does the Premier League resume after the World Cup?

‘But we’re not expecting him to miss training for much longer and we’ll just have to assess it from there.’

Luke Shaw, Mason Mount and Declan Rice are all in line to start England’s first game of the 2022 World Cup (Getty)

Elsewhere in Group B, USA play Wales at 7pm GMT, while Netherlands face Senegal in Group A on Monday.

Southgate has also confirmed England’s players will take the knee before their match against Iran.

‘It’s what we stand for as a team and have done for a long period of time,’ said the England manager.

‘We feel this is the biggest and we think it’s a strong statement that will go around the world for young people, in particular, to see that inclusivity is very important.’