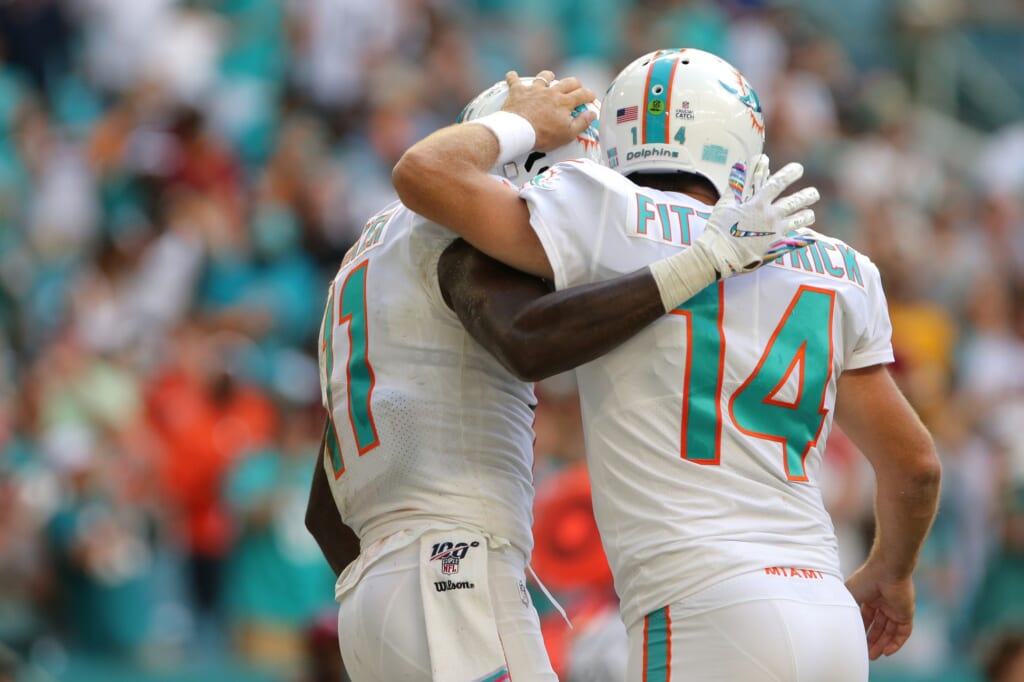 The Miami Dolphins named Ryan Fitzpatrick as their starting quarterback for Week 1 of the NFL season because he gives them the best chance to win. It might not be the only reason he takes the field against the New England Patriots, though, as he stares down an opportunity to pass three legendary quarterbacks with some big stats.

While Fitzpatrick hasn’t exactly been a star during his career, the 37-year-old quarterback has stuck around for more than a decade. Heading into his 16th season, he’ll have the opportunity to do something special in Week 1.

Since coming into the league as a seventh-round pick out of Harvard in 2005, Fitzpatrick has played for eight NFL teams. While his stays with each organization have never lasted very long, he’s posted some impressive stats during his pro career.

When he takes the field on Sunday against the Patriots, he will be closing in on surpassing multiple Hall of Fame quarterbacks in career passing yards. In fact, he could accomplish an impressive feat on his first drive of the 2020 season.

Fitzpatrick currently sits just 56 yards shy of Troy Aikman (32,492) and the No. 38 spot among the NFL’s all-time leaders in career passing yards. Once he moves past the three-time Super Bowl champion, Fitzmagic can turn his attention to another legend.

By the third quarter of the Dolphins’ Week 1 game, Fitzmagic might also pass Y.A. Tittle (33,070) in career passing yards. He needs just 185 yards to pass the Hall of Famer before going after the next icon.

If Fitzpatrick reaches 238-plus passing yards on Sunday, he’ll move past Steve Young to move into the No. 35 spot. While he might not have the two NFL MVP awards and three Super Bowl rings, a degree from Harvard and more career passing yards will still give him some bragging rights.

It gets even better for Fitzpatrick. He is just three touchdowns shy of passing Terry Bradshaw on the NFL’s career passing touchdowns list. He would also have a chance to surpass Young’s passing touchdown mark (232), but it’s unlikely the Dolphins keep Tua Tagovailoa on the bench for the entire season.

Fitzpatrick will certainly head into Week 1 focused on beating the Patriots, with the hope of delivering another upset. Let’s just hope that when he does pass the Hall of Fame quarterbacks, the fans and broadcast shows him some love.