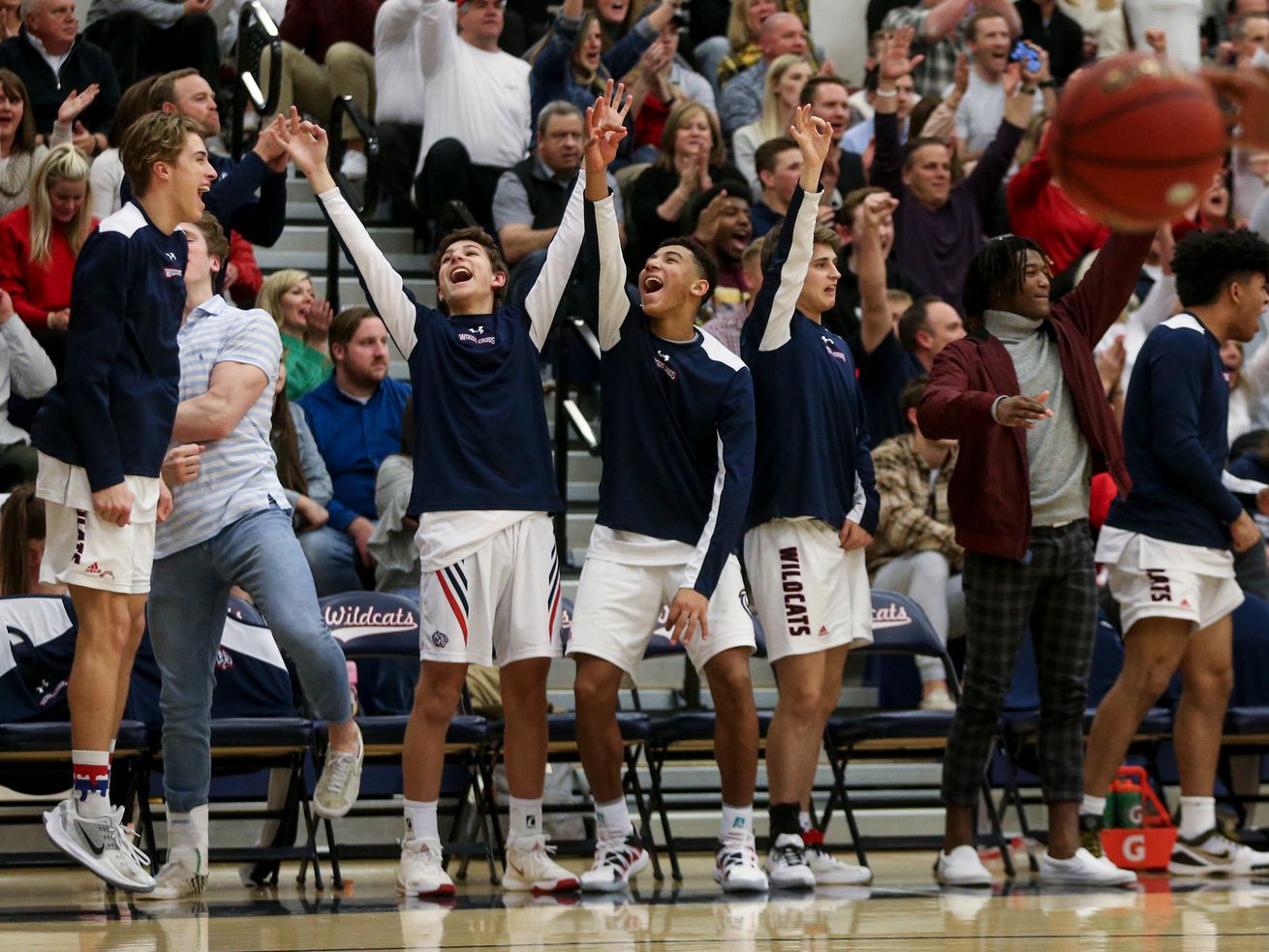 The Woods Cross Wildcats cheer after a teammate scored a 3-pointer during a basketball game against Bountiful Braves at Woods Cross High in Woods Cross on Friday, Feb. 14, 2020. | Ivy Ceballo, Deseret News

WOODS CROSS — Regardless of how RPI seeding has changed the complexion of the state tournament, Woods Cross and Bountiful proved Friday night that region championships still matter.

With the Region 5 title on the line, the archrivals squared off in front of packed student sections that cheered and heckled the entire game.

As Woods Cross’ students and players celebrated at midcourt following an emphatic 77-60 victory, they made a point to turn and chant to Bountiful’s vacating student section, “Region champs, region champs.”

It was an extremely sweet feeling for the Wildcats because four games into Region 5 play back on Jan. 24 they sat smack dab in the middle of the pack and a region title didn’t seem very realistic after back-to-back losses to Box Elder and Bountiful.

That earlier loss to Bountiful proved to be the defining moment of the season for Woods Cross, which hasn’t lost since.

“This is a pretty good team and a pretty good group of boys,” said Woods Cross coach Jeff Jorgensen as his team cut down the nets. “We had two losses right in a row before the turn, and these guys sat down and committed to themselves if they wanted to accomplish something like this we had to set goals, game by game by game, and we always kept that goal just big in our mind what can happen.”

Woods Cross nearly got caught peaking ahead at the schedule earlier this week as it narrowly escaped with the win over Bonneville, 57-54.

On Friday, it didn’t hold anything back. Woods Cross jumped out to a quick 19-11 lead after the first quarter and then stretched it to 45-31 by halftime.

Seniors Quaid Knell and Jake Howe both hit a pair of 3-pointers in the second quarter as the Wildcats dictated the tempo to their liking.

Early in the third quarter, Bountiful’s Camron Chism hit a 3-pointer to cut the lead to 47-36, but after getting three straight stops defensively, his team missed out on three straight chances to try and cut the deficit to single digits and possibly make things interesting.

Howe and Cort Richards eventually hit a couple of 3-pointers to push the lead back to 17 points as Woods Cross closed the game out easily in the fourth.

“We executed our game plan and Bountiful tonight couldn’t keep up and they couldn’t establish their game plan, which is a slower tempo,” said Jorgensen.

Tyler Roberts finished the game with 16 points to …read more

Report: Marvin Williams to sign with Bucks after buyout from Hornets