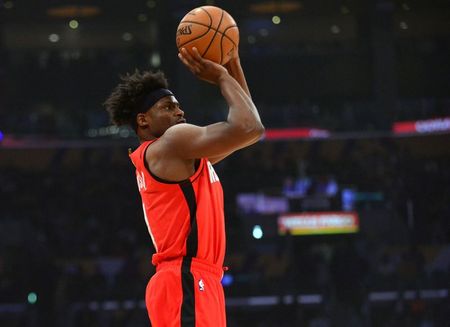 NEW YORK (Reuters) – The National Basketball Association (NBA) removed Houston Rockets forward Danuel House from its Orlando, Florida, campus for violating health and safety protocols after he brought a guest inside the so-called “bubble”, the league said on Friday.

The league, whose season was suspended in March due to the COVID-19 outbreak, resumed play in July in a fully quarantined setting at Walt Disney World.

“House had a guest in his hotel room over multiple hours on September 8 who was not authorized to be on campus,” the NBA said in a written statement. “Mr. House is leaving the NBA campus and will not participate with the Rockets team in additional games this season.”

The Rockets currently trail the Los Angeles Lakers 3-1 in their conference semi-finals, after losing 100-110 on Thursday. House missed Thursday’s game while the NBA investigated his case.

Players at the league’s bio-secure “bubble” are required to remain on campus at all times and submit to regular health screenings, in order to mitigate the risks of the ongoing COVID-19 pandemic, which has so far claimed more than 190,000 lives in the United States.

Cowboys vs Rams: 5 plays that cost the Cowboys in Week 1

Are college sports in trouble? Asking for Kyle Whittingham