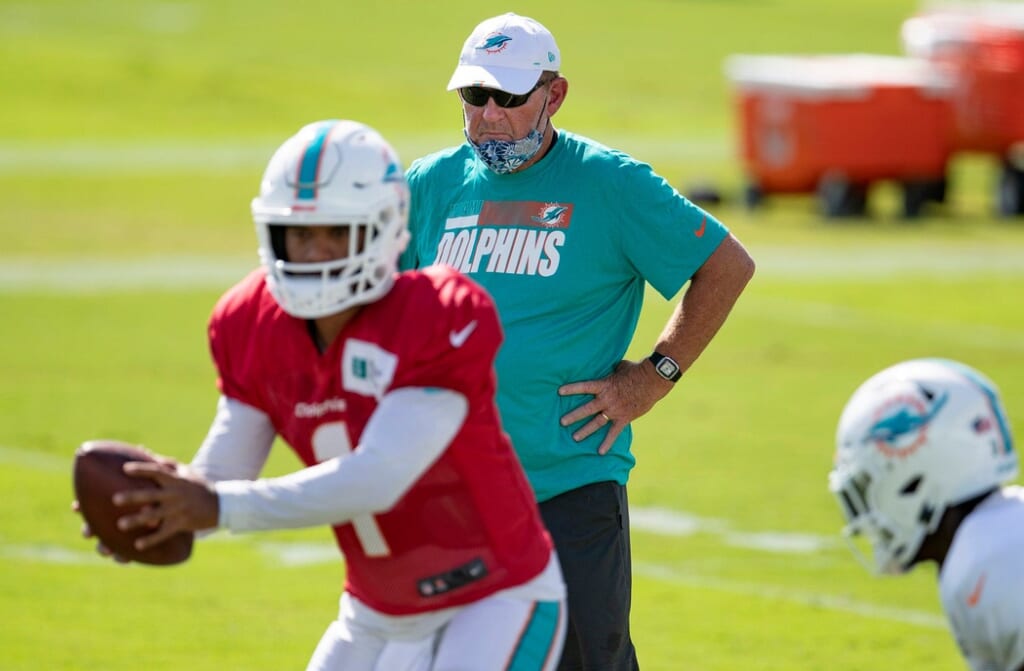 It was about 10 months ago that then-Alabama star quarterback Tua Tagovailoa suffered a serious hip injury against Mississippi State.

Projected to be the unquestioned No. 1 pick in the 2020 NFL Draft the following April, Tua’s entire football career was up in the air. Dealing with the same injury that cost Bo Jackson his career decades earlier, there was some concern that the former Heisman finalist would never be the same again.

In what has to be seen as a shocking recovery, Tagovailoa is now 100% healthy months after his Miami Dolphins made the quarterback the No. 5 pick in April’s NFL Draft.

Tua Tagovailoa will be active for NFL debut on Sunday

Dolphins’ first-round pick Tua Tagovailoa, whose status for this season became in question after fracturing and dislocating his hip last November, was a full participant in practice this week and will be ready and available for Sunday’s opener at New England.

Again, this is some absolutely tremendous news. From his football career potentially being on the brink to making his professional debut — all within the matter of 10 months. The question now becomes obvious. Why isn’t Tua Tagovailoa the Dolphins’ Week 1 starter?

Ryan Fitzpatrick is what he is

A former seventh-round pick of the then-St. Louis Rams, Fitzpatrick has been among the most-underrated quarterbacks in the NFL during his career. With that said, he’s not much more than a stopgap option right now.
Fitzpatrick put up 3,529 passing yards with 20 touchdowns and 13 interceptions in 13 starts for the Dolphins last season. Those are not the greatest of numbers in today’s quarterback-friendly NFL.
The former Pro Bowler is 37 years old and will long be retired before Miami becomes relevant as a playoff contender.

Understanding why the Dolphins want to hold Tagovailoa back

There’s another argument to be had here. Tua has not played in live-game action since suffering the above-mentioned injury Nov. 17.
The rookie did not participate in any in-person off-season activities due to the COVID-19 pandemic. The entire 2020 NFL preseason was canceled, too.
All rookies are playing from behind due to these unusual circumstances. That’s magnified when we’re talking about a quarterback coming off a serious injury.

Dolphins are still in rebuild mode

There’s two ways to look at this. Miami’s supporting cast is among the weakest in the NFL. Its backfield consists of two castoff running backs in that of Matt Breida and Jordan Howard.
At receiver, Miami will be relying on former first-round bust DeVante Parker as well as unproven players in that of Isaiah Ford and Jakeem Grant.
Young head coach Brian Flores might not want to throw Tagovailoa into the fire with such a weak skill-position group.
On the other hand, we’re talking about the Dolphins’ franchise quarterback. Another argument can be made that delaying the invevitable does nothing to help Tua progress as the face of the franchise.

Miami was much more competitive under Flores …read more