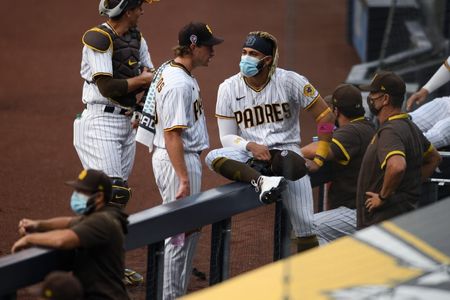 (Reuters) – Two games between the San Diego Padres and San Francisco Giants at Petco Park have been postponed after a member of the Giants organization tested positive for COVID-19, Major League Baseball (MLB) said on Friday.

The two teams had lined up for the national anthem ahead of Friday night’s game but neither took to the field, following which the Padres announced that the game had been postponed.

“Following a positive test for COVID-19 in the San Francisco Giants’ organization, tonight’s and tomorrow’s scheduled games have been postponed out of an abundance of caution and to allow for additional testing and contact tracing,” MLB said in a statement.

The league said it would provide updates as and when necessary.

The Padres and the Giants are scheduled to face each other at Oracle Park from Sept. 25-27 in their final series of the season.

(Reporting by Arvind Sriram in Bengaluru; Editing by Kim Coghill)