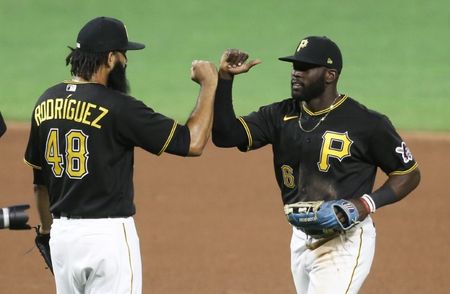 The Pittsburgh Pirates said outfielder Anthony Alford is expected to be ready for spring training in 2021 following surgery on his fractured right elbow.

Alford, 26, had the operation at Allegheny General Hospital in Pittsburgh on Tuesday, performed by Dr. Patrick DeMeo and Dr. Greg Altman.

The Pirates placed Alford on the 45-day injured list on Sunday. The center fielder sustained the injury during the third inning of Saturday’s 6-2 win against the visiting Cincinnati Reds when he slammed into the outfield wall while pursuing Tucker Barnhart’s home run.

Claimed off waivers from the Toronto Blue Jays on Aug. 27, Alford had a single, triple, homer and four RBIs in five games with Pittsburgh.

“Honestly, it makes me feel a little sick to my stomach just because of the opportunity he has right now, but even more so knowing the person and the kid,” Pirates manager Derek Shelton said Saturday. “Just to see the pain and anguish in his eyes, it’s difficult.”