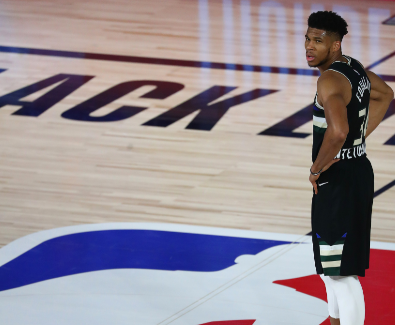 The future of reigning NBA MVP Giannis Antetokounmpo is going to be the biggest story around the Association for pretty much the next year.

Giannis and his Bucks were shockingly eliminated from the playoffs by the Miami Heat in the Eastern Conference Semifinals earlier this month. It was a depressing end to a campaign that saw Milwaukee boast the best regular-season record in the NBA.

The backdrop here is the Greek Freak’s likely foray into free agency following the 2020-21 season. Apparently, Antetokounmpo is looking into his future immediately after his team was eliminated from playoff contention.

“Last season’s MVP and this year’s Defensive Player of the Year met privately with co-owner Marc Lasry, sources said,” Chris Haynes of Yahoo! Sports reported. “The meeting came on the same day the 6-foot-11 star unfollowed hundreds on Twitter and Instagram, including the Bucks team account and his teammates’ accounts.”

The backdrop of Giannis unfollowing multiple teammates and the Bucks’ social media accounts obviously has other teams and potential suitors paying close attention to this situation.

Antetokounmpo did note after his Bucks were eliminated by Miami in the playoffs that he would not request a trade. With that said, there’s something happening behind the scenes here.

The talented forward has one more season remaining on his current deal. If it were all about finances, he’d ink a super-max extension with Milwaukee during the fall. The team can offer him a five-year, $254 million extension — tens of millions more than any other franchise.

It’s not all about the money. Today’s NBA consists of star players moving on from smaller markets for some of the top media markets in North America. It’s all about marketability. Just ask the likes of LeBron James, Paul George and Kawhi Leonard about that. All three traded in smaller markets for Los Angeles.

Will Giannis Antetokounmpo be traded?

That’s the biggest question right now. If the Bucks view Giannis’ departure in free agency next summer as imminent, the team will have to seriously consider trading him. Simply put, Milwaukee can’t afford to lose Antetokounmpo for nothing.

There’s nothing to suggest that the Bucks’ brass is thinking about this right now. Depending on how Giannis’ meeting went on Saturday, that could change in short order.

Still only 25 years old, Antetokounmpo averaged 29.5 points, 13.6 rebounds and 5.6 assists this past season. He’s seen as the future world-wide face of the NBA.

BYU starting QB Zach Wilson reveals he had COVID-19 over the summer. Here’s why he’s looking for a new place to live