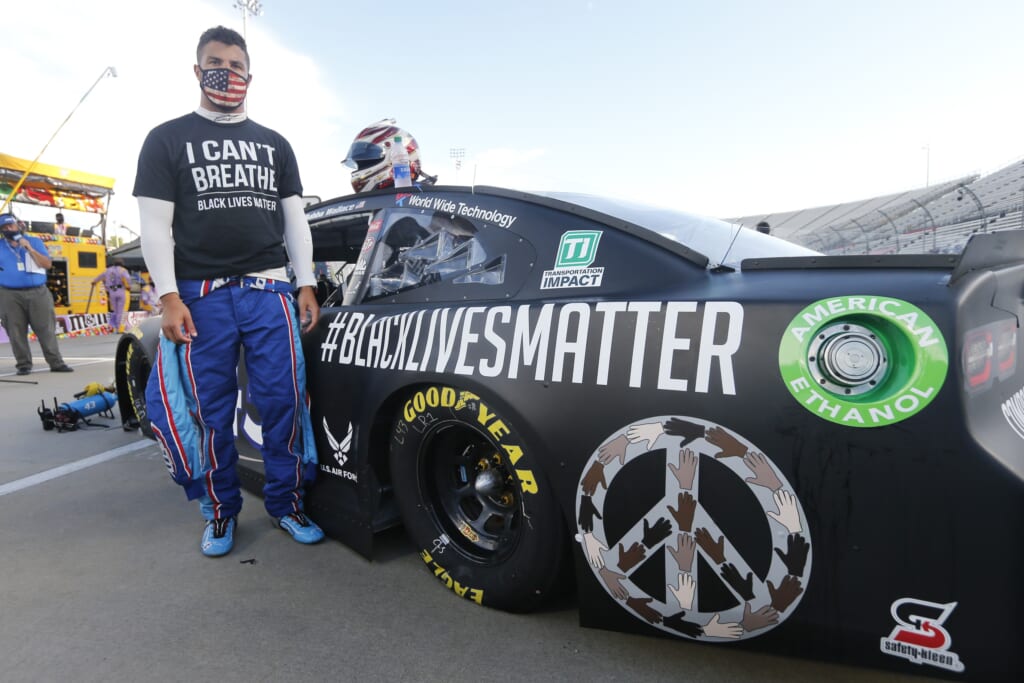 After it was announced that Bubba Wallace would be leaving Richard Petty Motorsports at the conclusion of the season, many started to speculate where Wallace would land. Although, it seems as if Wallace might’ve already set his sights on Gaunt Brothers Racing.

According to Motorsport.com’s Jim Utter, Gaunt Brothers Racing is the leading candidate to land Wallace’s services in 2021. This season, Wallace has one top-five and three top-10’s, with an average finishing position of 20.4.

This season, Daniel Suarez joined Gaunt Brothers Racing for their first full-time season in the NASCAR Cup Series. While they did not make the Daytona 500, they have consistently run well this year. With the news that Suarez and Gaunt Brothers Racing have mutually agreed to part ways, it opened the door for them to explore other drivers.

With many sponsors tied to Wallace, a lower-tier team like Gaunt Brothers Racing would find someone like Wallace appealing. Even after all of the negative publicity due to the noose incident at Talladega, Wallace is a fan favorite and has the capabilities to be a great driver.

Why would Bubba Wallace join GBR?

According to Motorsport.com’s Jim Utter, Gaunt Brothers Racing could have a whole new look for 2021. The move would land them a charter, an influx of new investors (including current NASCAR star Denny Hamlin), and expanded manufacturing support from Toyota.

After Leavine Family Racing announced they would sell their team at the conclusion of the season, it left Toyota with only five active drivers. Four of those drivers are from NASCAR powerhouse Joe Gibbs Racing. Although, the additional support from investors and Toyota would give Gaunt Brothers Racing the level of support now closed Furniture Row Racing had.

Martin Truex Jr. won the 2017 NASCAR Cup Series championship racing for Furniture Row Racing. He then moved to Joe Gibbs Racing once they closed shop at the end of the 2018 season. The support from everyone involved could give Wallace the ability to compete right away.

If this deal goes through, Bubba Wallace will be setting himself up in a good position for his future. He could return to Toyota with a boatload of sponsorship and have a car capable of winning.

Previous drivers for Joe Gibbs Racing affiliates have landed good rides. Martin Truex Jr. and Christopher will be apart of Joe Gibbs Racing and Matt DiBenedetto landed with Wood Brothers Racing. This could lead to an even better ride for Wallace if he goes that route.

Wallace raced for Toyota before going to Roush Fenway Racing in the NASCAR Xfinity Series. He wouldn’t be new to them. There are other options such as Chip Ganassi Racing and Hendrick Motorsports still out there. But if the details set out are true, Wallace could have a ride capable of winning races down the line.

We’ve got live football for you here. Watch live streams from Week 4 of the Utah high school football season