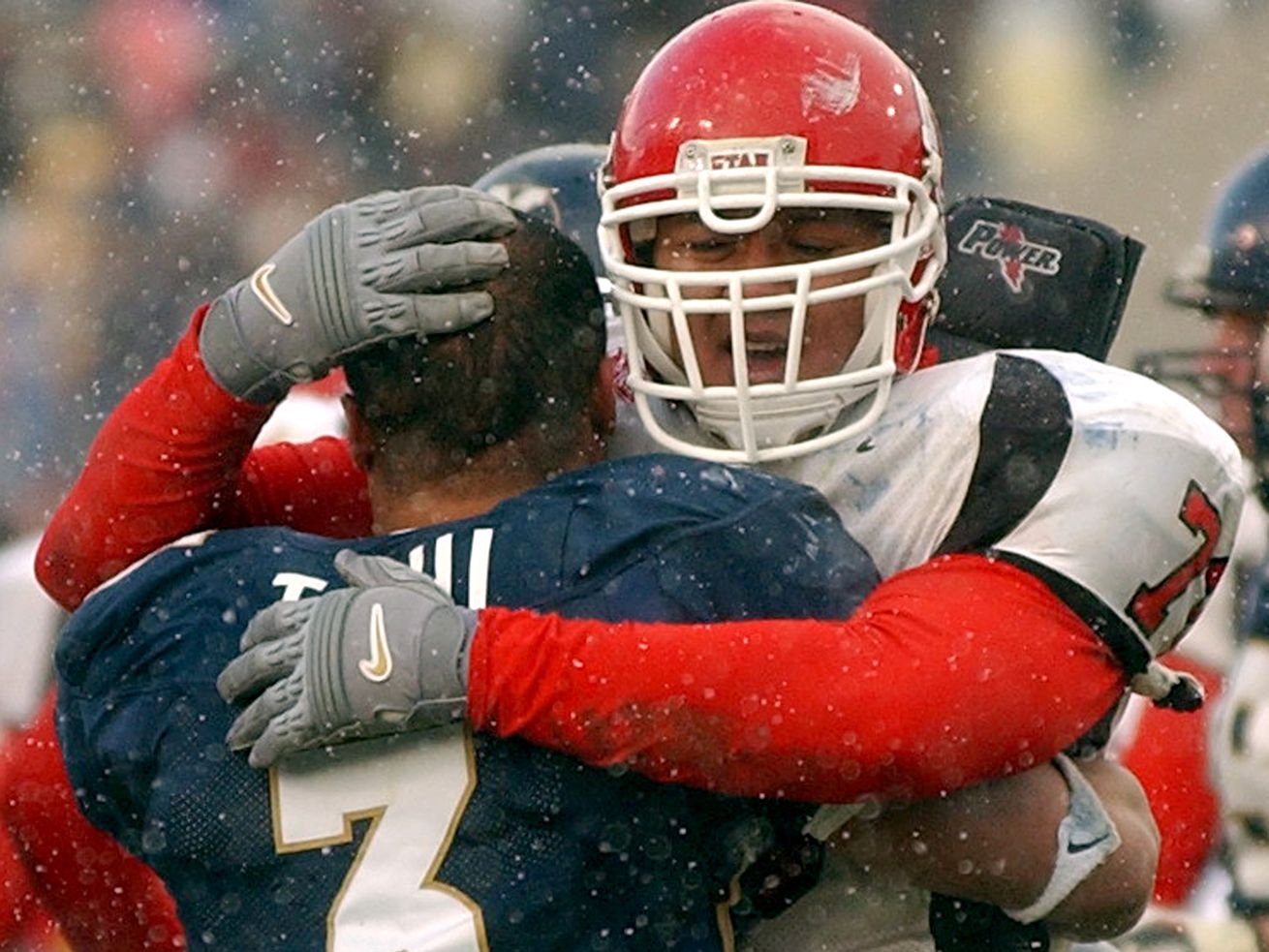 Utah’s Tavo Tupola(78) hugs BYU’s Naufahu Tahi (3) after the Utes defeated BYU 3-0 in Provo in 2003. The two programs would again be conference mates if a national writer gets his wish. | Deseret News

The Forde Bowl Subdivision, as SI cleverly called his realignment daydreaming, would group teams together in a way that makes much more sense geographically than some of the conferences are currently comprised.

It’d almost be a Back to the Future re-envisioning of the old WAC.

what do y’all think about @ByPatForde’s offering for conference realignment? pic.twitter.com/PAgamyrIQq

The new college landscape would be financially beneficial because of the closer proximity of the schools in each conference, Forde believes. There are more advantages.

“If only this could be pitched to centralized leadership of college football that was interested in the good of the entire enterprise. But that doesn’t exist, and that’s another column for another day,” Forde wrote. “What college football would gain from this realignment: uniformity; conference championships that truly matter; increased access to a more lucrative playoff; a more level playing field for the little guys; renewed regional identity; cherished rivalries preserved, restored—and, in some cases, forced into permanent existence. The advantages are abundant.”

Forde pointed out that the realignment would make even more sense for the budgets of basketball programs and non-revenue sports because of travel savings.

Other highlights of Forde’s suggested makeover:

— The College Football Playoff would include the champion of each conference plus two at-large teams, with the top four seeds earning a first-round bye. There would still be bowl games for non-playoff teams.

— The plan would lift North Dakota State up from the FBS, but Bowling Green, Coastal Carolina, Liberty, Louisiana-Monroe, New Mexico State, San Jose State, South Alabama, Texas State, Troy, UTEP and UTSA would be demoted from the FCS. The could be a relegation/elevation system every there years.

Forde admits there are flaws, including the breakup of traditional conference rivalries and trying to get Power 5 schools to share their riches with non-P5 schools, and academic incompatibilities.

“Will it happen? …read more

Increasing concern that the 2020 NFL season will not be completed