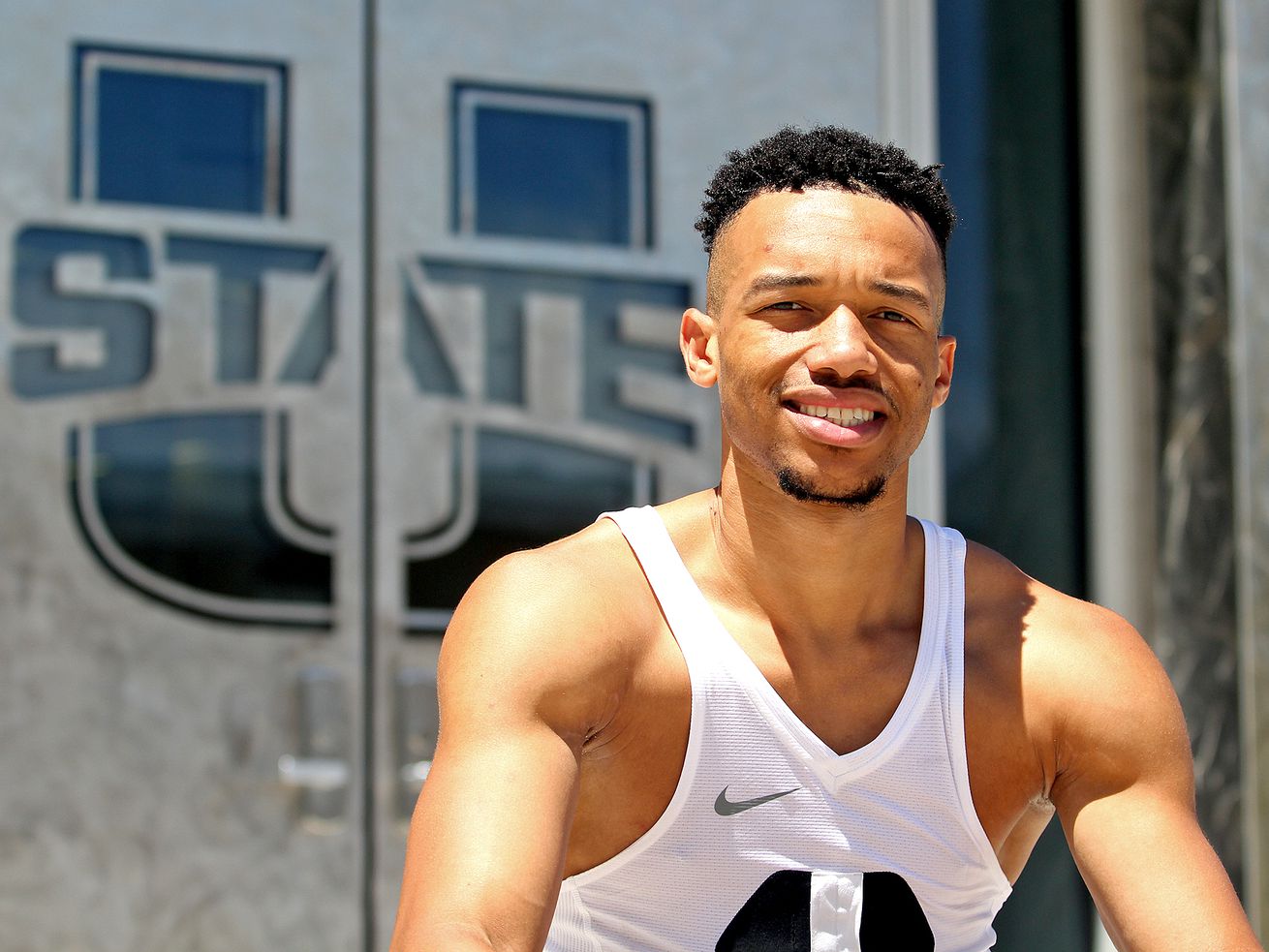 LOGAN — As the COVID-19 pandemic continues to impact collegiate athletics, there’s a strong possibility that it might be even longer than anticipated before Utah State head basketball coach Craig Smith is able to enjoy Marco Anthony’s highly anticipated debut in an Aggies uniform.

But then, what’s a couple more months for Smith, considering the extreme amount of patience he’s already exercised when it comes to the 6-foot-5, 225-pound junior transfer from the University of Virginia.

Thanks to the keen eye of his assistant coach Eric Peterson, Smith originally recruited Anthony during the spring of 2016 when he and Peterson were at South Dakota and Anthony was coming off his junior season at Holmes High School in San Antonio. Although he had averaged 20 points and seven rebounds per game, the Coyotes were the only Division I team to pay much attention to Anthony at the time.

Utah State Athletics
Utah State’s Marco Anthony goes up for a dunk during a preseason slam dunk contest in 2019.

“The first time I saw Marco play, he was like a bowling ball,” Smith recalls. “The guy is 6-5, and even in high school he had to be about 215, 220. You just don’t forget him. He’s so unique in the way that he plays; the way that he does things. I called Pete right away and told him, ‘If we can get guy, we won’t be able to keep him off the floor at South Dakota.’”

But after a slow start playing on a team on the Nike EYBL circuit during the summer, Anthony suddenly elevated his game, and soon it wasn’t just the Coyotes who were interested in adding him to their program. On July 18, Tony Bennett and ACC powerhouse Virginia offered him a scholarship, and unsurprisingly, he verbally committed to the Cavaliers a day later.

Looking back four years, Anthony says he might have been a little hasty making that decision.

“I committed to Virginia fairly early. Earlier than I probably should have because I didn’t really let other schools recruit me after I started playing well on the circuit,” he says. “Virginia is a big-name school, and I just committed right on the spot instead of letting my name blow up a little bit. My recruitment was still good, but it never really reached the max I think it would if I had just kept playing and allow other coaches to keep reaching out to me.”

Either way, Smith and South Dakota were obviously out of the running for Anthony, who went on to average 25.5 points, 10.2 rebounds and 3.7 assists as a senior in 2016-17. But while Anthony went on to have a very quiet freshman season at Virginia (he averaged two points and less than eight minutes per game), Smith and the Coyotes won 26 games in 2017-18, leading to him being hired as Utah State’s head coach …read more