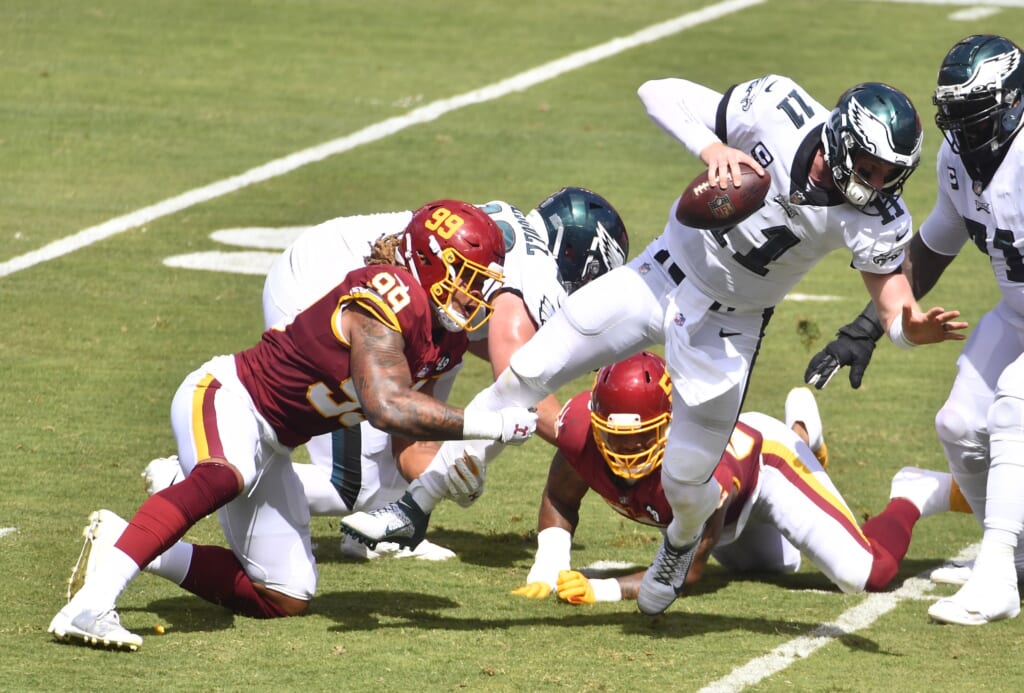 As the Washington Football Team went down 17-0 versus the Philadelphia Eagles, fans could sense another miserable season was underway. However, Ron River’s team didn’t quit. Instead, they erased a 17-point deficit and scored 27 unanswered points.

Playing in an empty FedEx Field, Washington showed this team is different from years past. An offseason dedicated to overhauling the club’s image and standard led to Rivera’s first statement moment and the organization’s first win as “The Washington Football Team.”

Here are the takeaways from Washington’s Week 1 comeback win over the Eagles.

Going into the 2020 season, Washington boasted an incredible collection of defensive talent, headlined by No. 2 pick Chase Young, that made this a team to watch. In Week 1, Washington showed why they are going to be a top-five defense in the NFL this season.

Washington harassed quarterback Carson Wentz all afternoon, finishing with eight sacks and even more pressures. The front seven seemed to be in Wentz’s face every time he dropped back to pass. Yes, the Eagles played without multiple starters on the offensive line. However, it really might not matter who Washington lines up against on Sundays. Quite simply, this defensive line demonstrated why they are going to be one of the best pass-rushing groups in the NFL.

While the front four dominated, Washington’s secondary struggled to start the game. Jalen Reagor torched the defense for a 55-yard gain. Meanwhile, tight ends Zach Ertz and Dallas Goedert caught a pair of touchdowns early in the game.

Once the pass rush started hitting Wentz more often, Washington’s secondary found its groove with two interceptions. Ultimately, it was a collective effort that paved the way to a 1-0 start.

One of the biggest takeaways from Week 1 is the growth of Haskins’ leadership abilities. The second-year quarterback went up to the defensive line after a pivotal stop and reassured them that he would capitalize.

Additionally, while Ron Rivera was getting an IV, Haskins stepped in with a fiery halftime speech. The 23-year-old’s leadership qualities are evident and it’s those little details that can make a franchise quarterback and lead to victories.

Confidence and leadership are great, but there’s still room to grow as a passer. The second-year quarterback threw one touchdown on 31 attempts, finishing with 178 passing yards. Fortunately, he avoided costly turnovers and his actions played a key role in this team’s comeback. If Haskins improves his play, Washington may be a sneaky contender in the NFC East.

For the past decade, Washington’s toxic culture was a stain on its image and even the NFL. When Rivera took the head coaching job, one of his biggest challenges was completely overhauling the organization and bringing about the change it desperately needed.

With the bizarre offseason, most fans …read more