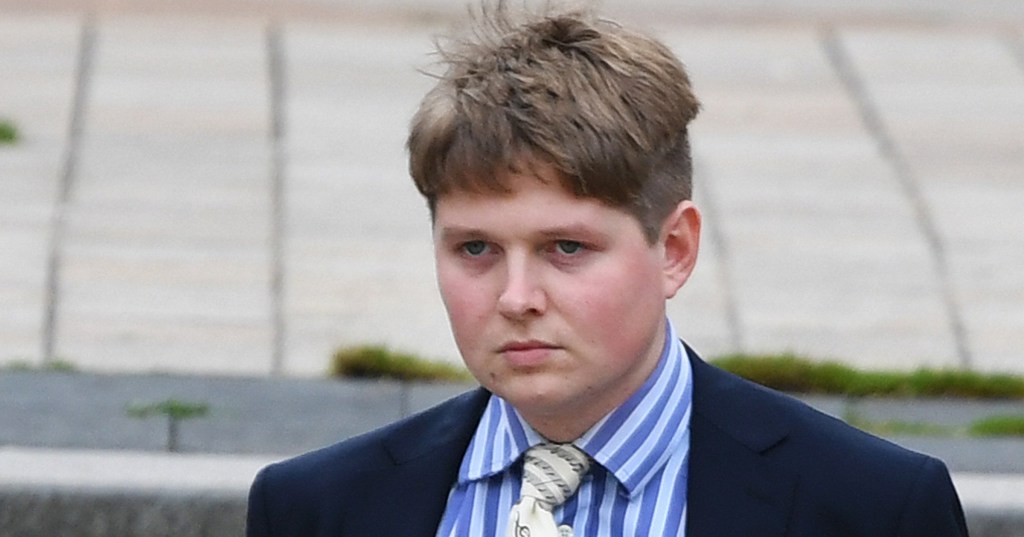 Louis Mann, 28, launched into a rant of religious and racist abuse on the plane (Picture: Liverpool Echo)

A passenger who launched into a tirade of religious and racist abuse on a plane and gave a Nazi salute has avoided jail.

Louis Mann, 28, had travelled from Warsaw in Poland to John Lennon Airport in Liverpool when he spouted the horrific rant in front of Holocaust victims.

One person, who filmed the incident, said he was left ‘shaken’, ‘shocked’ and ‘disgusted’.

Liverpool Crown Court was told how Mann was a medical student studying in Poland, had mental health difficulties and had been groomed by far-right extremists.

Prosecutor Zillah Williams said: ‘The defendant was a passenger on a Wizz Air flight from Poland, Warsaw, to Liverpool on October 19, 2019.

‘The flight arrived at Liverpool John Lennon Airport at 5.37pm.’

She said the offence for which Mann was charged took place when the flight had landed in Liverpool.

‘The flight was full and passengers reported that during the flight Mr Mann had had to be repeatedly asked to sit down, to fasten his seatbelt and to refrain from making rude and offensive gestures,’ Ms Williams explained.

He then began what was described to the court as a ‘tirade of racial and religious abuse by words and gestures’.

‘He was standing in the aisle of the flight making a Nazi salute and was shouting: “Anglo-Saxon race, we are superior.”‘ Ms Williams said.

Analysis: The odds for legal pot and casinos in Texas just got worse

Even after police boarded the plane at Liverpool, the abuse continued during Mann’s arrest.

The rant continued even when Mann had been transported to the custody suite, telling one police officer: ‘You’re alright, you’re Aryan.’

Ms Williams said: ‘He was particularly upset, he lost family members during the Holocaust. He was extremely shaken by it.

‘[Mann] was talking about people being inferior and was being derogatory to Jewish and Black people.

Mr Tych wrote in a victim impact statement: ‘Prior to this I have always felt very welcome in this country.

‘I have lived in this country for 31 years, I have never experienced this sort of behaviour.

‘I am of Jewish origin, this made me feel very shaken and upset, I also felt angry, disgusted and upset as he continued his behaviour regardless of other people’s feelings.’

Blind disabled man, 21, stabbed to death outside his home by stranger

A medical examination confirmed Mann, who has no previous convictions, was drunk but unfit for interview for mental health reasons.

David Traynor, defending, said the behaviour was ‘disgraceful’, adding ‘no one should have to observe it’.

But he added stress from Mann’s medical course caused a ‘deterioration’ in his mental health and his ‘intake of alcohol increased drastically’ leading up to the incident.