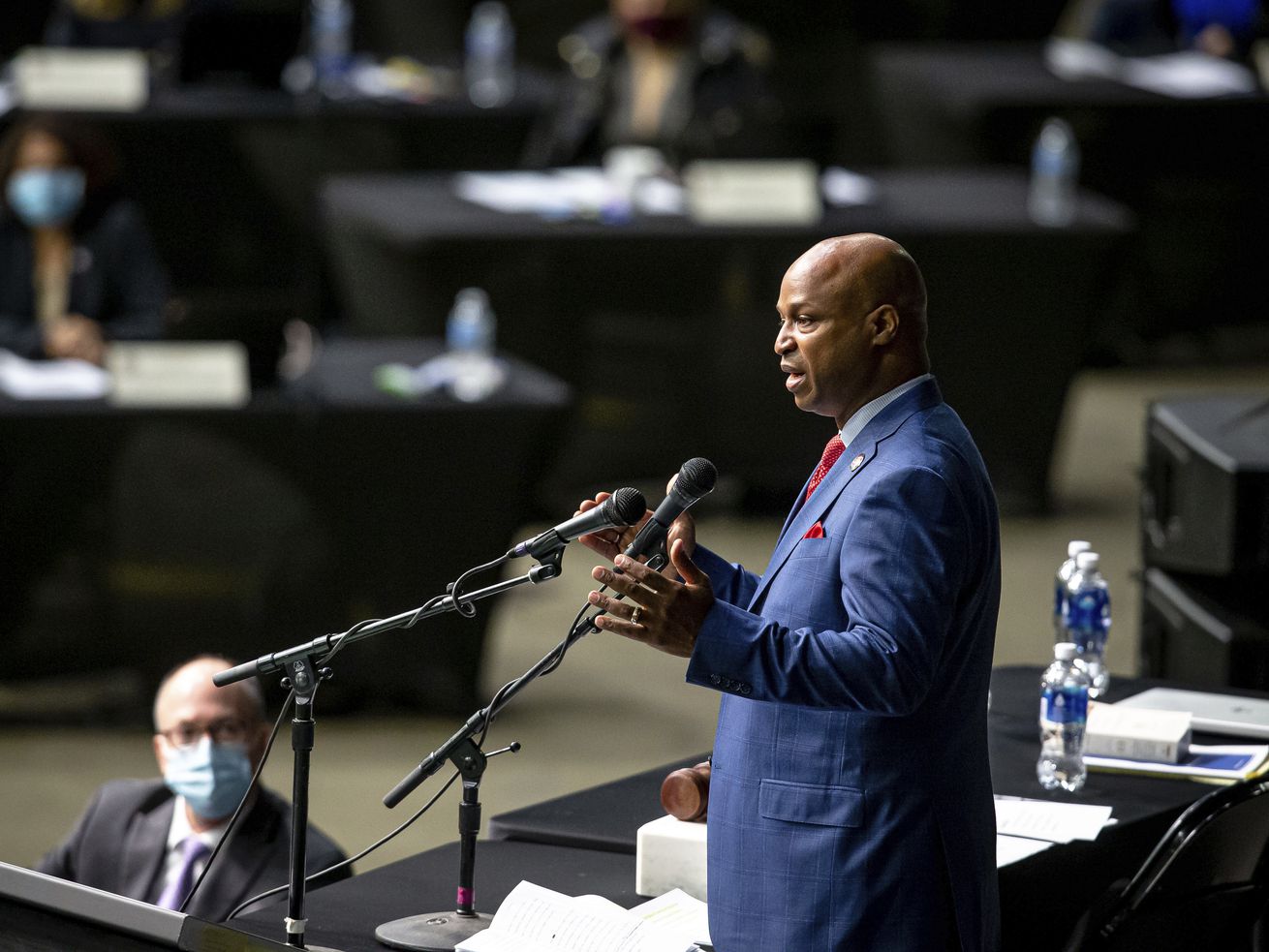 House Speaker Emanuel “Chris” Welch delivers his remarks after taking the Oath of Office for the 102nd General Assembly for the Illinois House of Representatives at the Bank of Springfield Center on Wednesday. | Justin L. Fowler /The State Journal-Register via AP

The future starts now for Welch, a savvy politician whose rapid ascendance through the party ranks was no accident, but rather the result of shrewd relationship building.  A majority of Illinois voters have wanted a change from Madigan’s leadership. Now they finally get their chance.

“People may doubt what you say, but they will believe what you do,” the Hillside Democrat said just minutes after ending Michael J. Madigan’s nearly four-decade reign as the one powerful constant in Illinois government.

It was Welch’s way of asking people to give him a chance to prove himself.

Just starting his fifth term in the Legislature, while replacing someone who was first sworn into office a month before Welch was born, the new speaker indeed comes to office facing plenty of doubts, yet he will have every opportunity to prove his doubters wrong.

He faces doubts from Republicans that he will break from the partisan, heavy-handed example of his ally Madigan, doubts from women in both parties over past #metoo allegations and doubts from Democratic interest groups that he can look out for them as well as the outgoing speaker.

But the future starts now for Welch, a savvy politician whose rapid ascendance through the party ranks was no accident, but rather the result of shrewd relationship building.

A majority of Illinois voters have wanted a change from Madigan’s leadership but were frustrated at their inability to influence the contest. Now they finally get their chance.

Notably, Welch wasn’t one of them, but rather a Madigan defender to the end. He began his acceptance speech with a salute to his oft-maligned predecessor.

Justin L. Fowler/The State Journal-Register via AP
House Speaker Emanuel “Chris” Welch calls for a a return to civility among lawmakers as he delivers his remarks at the Bank of Springfield Center on Wednesday.

“The state will never be able to adequately thank Speaker Madigan for the job he has done,” said Welch, who recently torpedoed a Republican-led effort to use a special House investigative committee to follow up on matters raised by a federal investigation into Madigan’s dealings with Commonwealth Edison.

I certainly have my own share of doubts after Welch’s partisan effort to hamstring the committee’s investigation and use it for Madigan’s defense instead of for an impartial pursuit of the truth.

But I’ve also seen Welch in action enough in other settings to know he is a talented politician who could provide a clear upgrade over Madigan’s style of leadership.

Still, don’t be surprised if there’s an element of be-careful-what-you-wish-for in Welch’s first year at …read more

The Best Bev for Our Anxiety Addled Times? A Good Cup of Tea