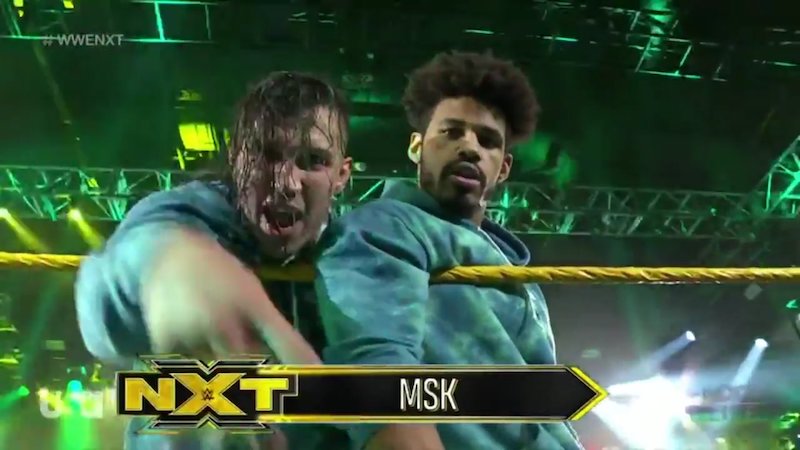 The Artists Formerly Known As The Rascalz (Photo: WWE)

The duo of Nash Carter and Wes Lee – who were known as Zachary Wentz and Dezmond Xavier before their move – made their first appearance for Triple H’s black and gold brand on Wednesday night as part of the Dusty Rhodes Tag Team Classic.

They appeared as surprised entrants into the match (even if many fans had already figured it out) and defeated the pairing of Isaiah ‘Swerve’ Scott and Jake Atlas with a lifted flipping neckbreaker.

In the next round, they’ll battle the winner of Killian Dain and Drake Maverick vs. Curt Stallion and August Grey as MSK look to advance and make their mark on the tournament and division as a whole.

Elsewhere in the opening round, Tony Nese and Ariya Daivari will face Ashante ‘Thee’ Adonis and Desmond Troy, while KUSHIDA and Leon Ruff look to knock off The Way’s Johnny Gargano and Austin Theory.

Meanwhile, Triple H has been full of praise for MSK, and appeared to give the duo full credit for their own development in IMPACT Wrestling.

‘”Did they just figure it out on their own, is somebody helping them guide them?” All those things, so you look at all these talent.

‘These are two kids that I’m very impressed with that the things that they’ve done, but I don’t know that they had a lot of helping hand to help have them get to where they are, they just sort of figured it out on their own.

‘I’m excited to see what they can do now and when you meet them, they’re really great guys that are humble and are hungry and looking for that opportunity.’

If you’ve got a celebrity story, video or pictures get in touch with the Metro.co.uk entertainment team by emailing us celebtips@metro.co.uk, calling …read more

Donald Trump: What?!? My Pre-Riot Remarks Were “Totally Appropriate!”

If I Had COVID-19, Should I Still Get Vaccinated?