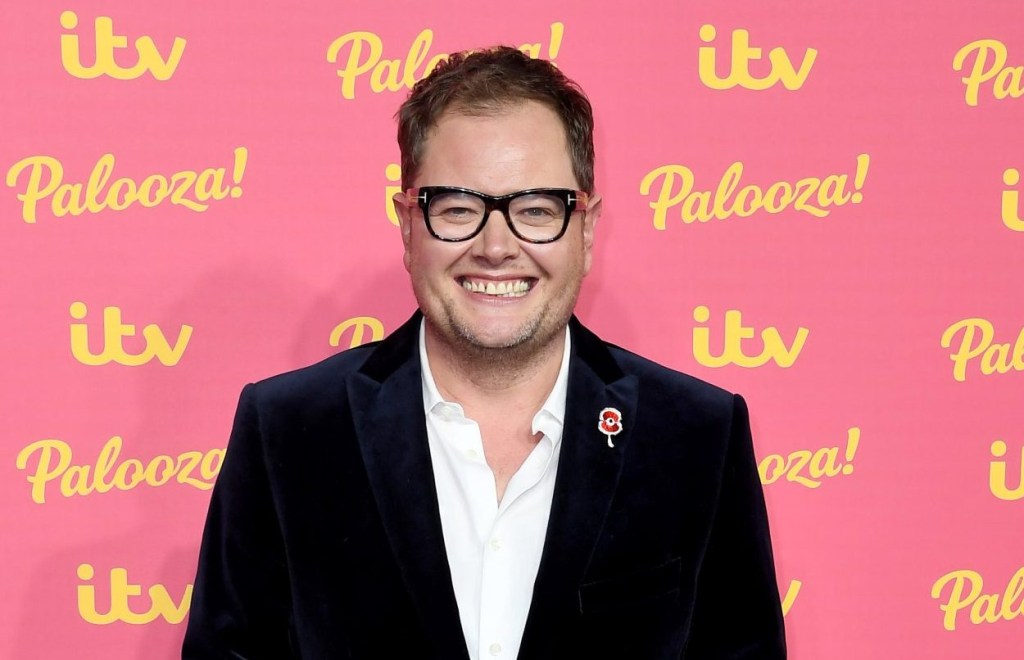 Alan Carr has shared his thoughts on whether he’d take on Dancing On Ice (Picture: Anthony Harvey/REX)

Alan Carr has insisted there is ‘no chance’ he’ll ever appear as a contestant on Dancing On Ice, recalling witnessing Kay Burley’s horrific injuries she sustained in the second series of the ITV show in 2007.

Yesterday it was confirmed Jason Donovan would be the latest celebrity to pull out of the gruelling contest, which has been plagued by injuries and issues due to the pandemic this season.

Reflecting on ‘poor old Jason’ having to leave the competition, Alan – who was yesterday defended from trolls as he took over Zoe Ball’s Radio 2 Breakfast show this week – made it clear we wouldn’t be seeing him on the ice anytime soon.

‘That show’s cursed isn’t it? Five celebrities have been forced to withdraw from the series so far,’ he said on Tuesday’s BBC radio programme.

‘They ask me every year to do that and I say no.’

He then went on to recall Sky News presenter Kay’s rough trot, which once saw her stretchered off the ice in a brace.

Jason is the latest star to pull out after injury (Picture: Matt Frost/ITV/REX)

Kay previously spoke about the injuries she sustained on the show, telling the Express: ‘I spent a lot of time having my head drilled into the ice, and I was knocked unconscious.

Kay suffered horrific injuries during her time on the show (Picture: Sky)

‘I broke ribs, I had a black eye, I dislocated my thumb.’

It comes as Jason was forced to pull out of the comp, after previously being advised to rest by the show’s medical team which meant he missed the show on February 14. He later said he was no longer able to continue.

Jason’s withdrawal was confirmed after Joe-Warren Plant and partner Vanessa Bauer were forced to leave the show after testing positive for coronavirus. The pair could now be asked to return to show after their period of self-isolation.

Professional skater Hamish Gaman became another casualty to drop out of the programme after he injured his finger pulling up a sock.

Denise Van Outen also previously had to withdraw due to a broken shoulder.

Reality star Billie Shepherd quit after suffering a heavy fall on the ice, while Rufus Hound also forced to leave after testing positive for coronavirus.

EastEnders spoilers: Sharon’s stint in The Queen Vic to end as she prepares to leave pub

Professional dancer Yebin Mok was also hospitalised after suffering a horror injury on the ice.

After the show took a break form screens last weekend, Phillip Schofield, who co-hosts the show with Holly Willoughby, admitted on Monday that he doesn’t know whether Dancing on Ice will return this weekend.

Harriette Cole: I know where she goes at night. Should I confront her?

Who Is The Stranger In ‘Superman & Lois’? He Has A History With Superman

Here’s Everything New On Netflix This Week, Including ‘Ginny And Georgia’ And ‘Crazy About Her’

How To Stream The 2021 Golden Globes, Because Who Can Resist Tina Fey & Amy Poehler?

‘Avatar: The Last Airbender’ Animated Film In The Works From New Studio