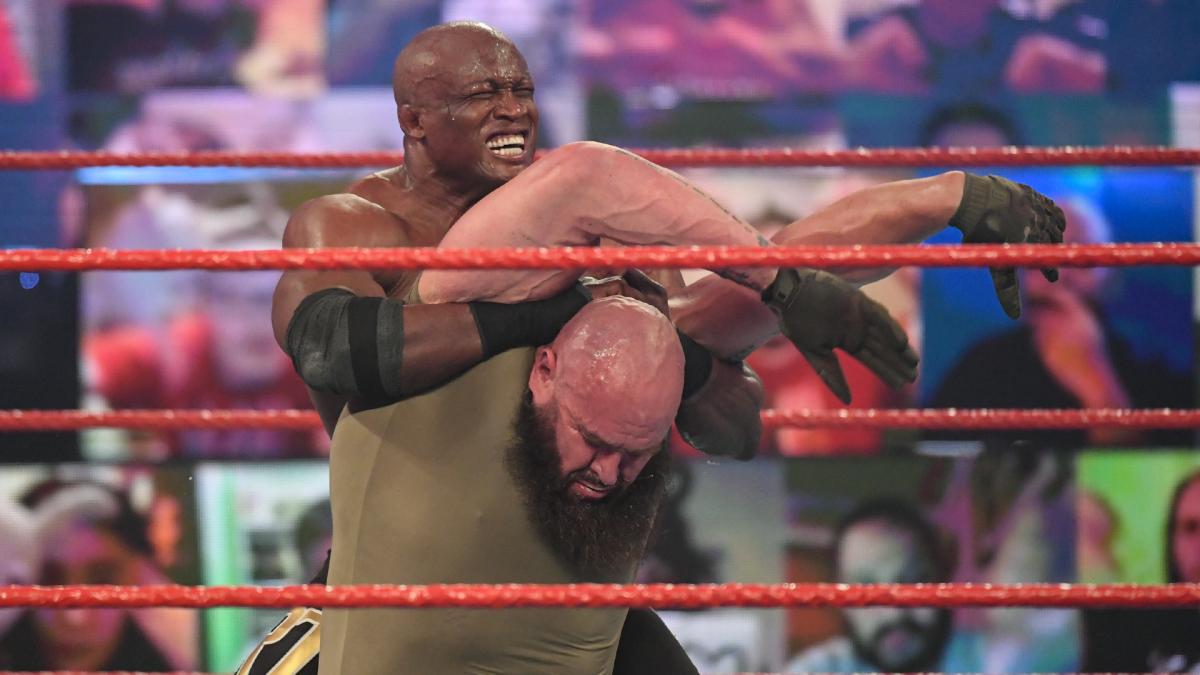 The All Mighty battered the Monster (Photo: WWE)

WWE built on a strong and shocking Elimination Chamber show as Monday Night Raw set the stage for a huge WWE Title Match.

New champ The Miz kicked things off with John Morrison as he talked up his big win after cashing in the Money In The Bank contract on a weakened Drew McIntyre at the end of Sunday’s pay-per-view.

However, Hurt Business’ MVP and Bobby Lashley came to the ring, congratulating The Miz but insisting the new champ owes the latter a title shot for his role in what went down.

Naturally the A-Lister tried to weasel his way out of it, and he was given an hour to give the All Mighty an answer.

Miz again tried to talk his way out of it, with Braun Strowman demanding a title match, which was shot down by Shane McMahon, and instead they were booked in our main event with the stipulation that if the Monster Among Men won, he’d be added to a blockbuster WWE Championship match next week between The Miz and Lashley.

This week’s main event was short and to the point, as Bobby and Braun battered each other in the name of entertainment with the WWE Champ on commentary for a closer look.

Lashley looked like a beast here, kicking out of Strowman’s powerslam and winning with a Spear, before battering his opponent and putting him in the Hurt Lock after the bell.

Miz tried to sneak in an attack of his own, only to get met with a Spear.

Who is headlining at Reading and Leeds as 2021 festival confirmed for this summer?

This was everything it needed to be, with the former United States Champion potentially looking at a world title run by the end of next week’s show.

The show kickstarted with new US Champ Riddle retaining his gold against John Morrison, as the pair put on a cracking match together with the past couple of nights showing why WWE needs to use JoMo more.

After a great vignette announcing Rhea Ripley’s arrival on Raw, it was time for 24/7 Title comedy with R-Truth against mistaking Bad Bunny for Buggs as he made some great Space Jam references.

Later on, Bunny’s pal Damian Priest defeated Angel Garza in another very fun match before he helped Bad Bunny hold onto his title despite the efforts of Drew Gulak and Akira Tozawa.

Elsewhere, The New Day’s Kofi Kingston and Xavier Woods defeated T-Bar and Mace in a brief but solid tag team match, with Mustafa Ali blasting his RETRIBUTION minions for how much they’ve failed him.

Backstage, Randy Orton talked about failure and turned his attention to ‘The Fiend’ Bray Wyatt and admitted Alexa Bliss has been his main distraction with her sinister mind games.

After some excellent foreshadowing by coughing during his promo, the …read more

India’s richest family is planning to build the world’s largest zoo, and the 280-acre project has already sparked a protest by animal activists

Rachael Kirkconnell: Stop Defending Me! White People Have a Lot to Learn!