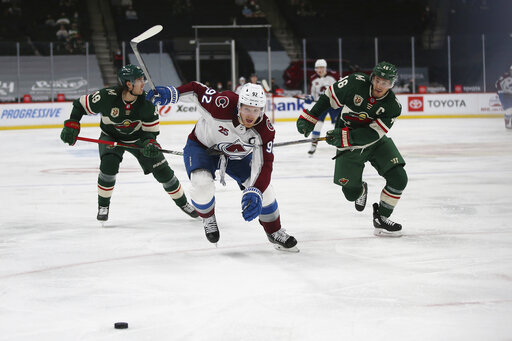 The numbers didn’t add up. But reality proved that it was true.

In the second period Monday night, the Avalanche was whistled for all three penalties, playing shorthanded for 5:06. But when the period was over, the Avs had outshot Minnesota 20-5 and outscored the Wild 4-0 at the Xcel Energy Center in St. Paul, Minn.

Red-hot Colorado, which took the first four penalties of the game, went on to defeat the Wild 5-4 to extend its NHL-leading points streak to 15 games (13-0-2). Minnesota rallied from a 4-2 deficit with two late power-play goals.

Maybe it’s just one team having another teams’ number. The Avs are now 5-1-1 against Minnesota and have outscored the Wild 16-4 in the last three meetings. The finale of the eight-game annual series is Wednesday in the same building.

Forwards Nathan MacKinnon, Andre Burakovsky, Brandon Saad and J.T. Compher scored in the second period to erase the Avs’ 1-0 first-period deficit. Defenseman Sam Girard had the primary assist on the first two goals and Burakovsky assisted on Saad’s goal and defenseman Cale Makar had the long shot that Compher redirected.

Forward Gabe Landeskog added a power-play goal in the third period after the Wild got within 4-2. Twelve Colorado players had points, and MacKinnon, Burakovsky and Girard each had two.

5 takeaways from the Avalanche’s 2-1 victory over St. Louis

Avs goalie Philipp Grubauer got the win for his NHL-leading 24th of the season. Grubauer also set a club record for consecutive games with a point (win, tie, overtime loss). He has 13, forging ahead of Patrick Roy and Peter Budaj, who had a point in 12 straight games in 1996 and 2007, respectively.

Colorado entered a stretch that has it playing 14 of its final 19 games on the road. The Avs improved to 9-4-2 outside Denver.

Footnotes. Rookie defenseman Kyle Burroughs stepped into the Avs lineup in making his NHL debut. Burroughs, 25, played on the third pairing with Jacob MacDonald and became the 13th defenseman to play for Colorado this season. Burroughs was acquired in the offseason fromthe …read more

An HBO filmmaker may have uncovered the potential identity of ‘Q,’ the shady figure behind QAnon

Janine Yorio just launched a fund that lets investors buy virtual land. She shares how her firm chooses which plots to offer — and breaks down the 3 most important elements of investing in digital real estate.