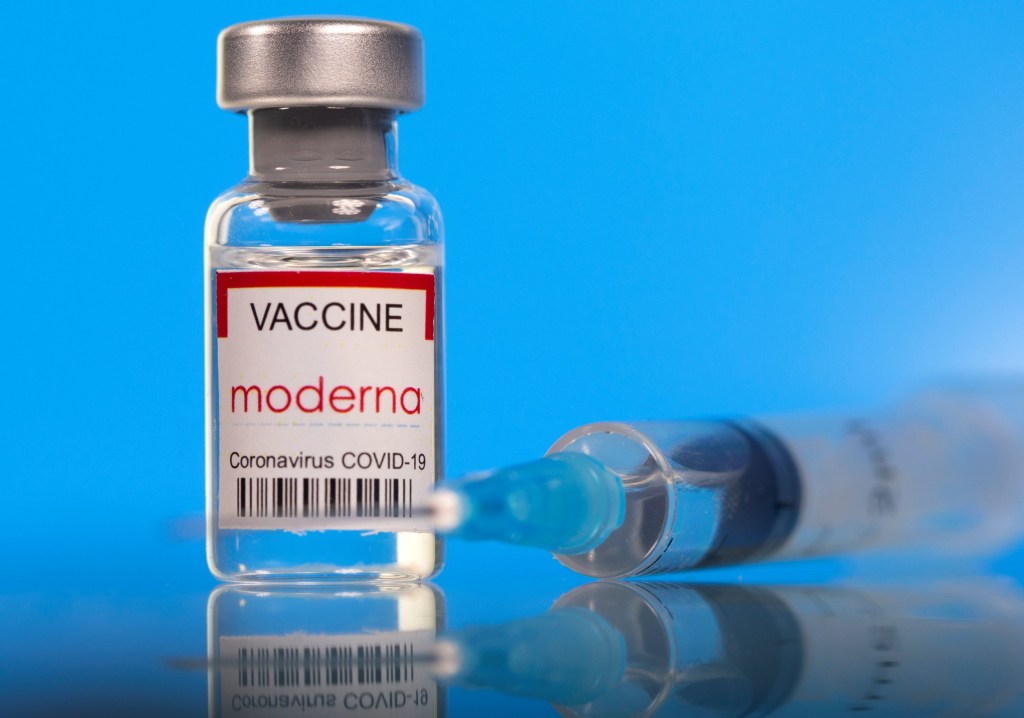 The Moderna Covid jab will be rolled out in the UK in around two weeks’ time (Picture: Reuters)

Brits will start receiving the Moderna Covid jab in around two weeks’ time, the vaccines minister has said.

Nadhim Zahawi confirmed today that the vaccine will be ‘deployed’ in the UK from around the third week of April. He told BBC Breakfast: ‘We’ll get more volume in May as well.’

It will be the third type of Covid vaccine available in the nation, alongside Pfizer and Oxford/AstraZeneca jabs.

The vaccine was approved for use by the Medicines and Healthcare products Regulatory Agency (MHRA) in January this year and the Government signed a deal for delivery of the 17 million doses by spring.

It is hoped that the rollout of the Moderna vaccine could help with the shortfall of the Oxford/AstraZeneca jabs in the coming weeks. Brussels has warned the UK  the vaccine won’t be exported until from the EU until the company has fulfilled its commitments to the bloc.

The Oxford/AstraZeneca vaccine has recently faced scrutiny over reports of seven people dying from rare blood clots after receiving the jab. The MHRA has insisted the risk associated with this type of blood clot is ‘very small’.

The risk of blood clots after the vaccine appear to be age-related, with younger people more likely to be affected, scientists say. Zahawi also said today that the agency had looked ‘very closely’ at reports of adverse reactions to the vaccines.

Asked about reports that regulators are considering proposals to restrict the use of the Oxford/AstraZeneca vaccine in younger people, Zahawi said: ‘The regulators absolutely look at, very closely, any adverse incidents through the yellow card system.

‘And June Raine, who is the chief executive of the MHRA, our independent regulator, said last night that if you get the invite for the vaccine to take that invitation and get the vaccine and get protected.

‘At the same time, they are looking at these very rare instances of blood clotting. To put it in perspective, we have done almost 20 million vaccinations using the Oxford/AstraZeneca vaccine.

‘Both vaccines have saved something like 6,300 lives between December and the end of February, so it’s important to continue to follow what the clinicians, the scientists, the regulators tell us. And we will absolutely do exactly as they say.’

Is That Music Video Making Your Kid Vape?

Kremlin says it fears resumption of fighting in east Ukraine

North Korea has become the first country to pull out of the Tokyo Olympics, citing COVID-19 fears