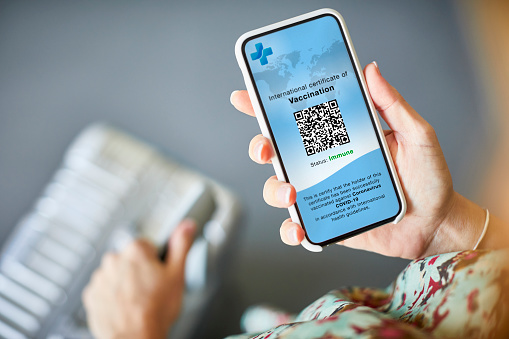 Vaccine passports have been suggested as every adult in the UK is expected to receive a jab by July. (Picture: Getty)

Boris Johnson has confirmed the country is on track to move to the next stage of the government’s roadmap out of lockdown.

From April 12, a raft of lockdown restrictions will be lifted in England, meaning that pubs, hairdressers, and gyms can reopen.

But that doesn’t mean the fight against Covid-19 is over and things can go back to normal.

One of the suggestions that’s been continuously floated to help society get back to normality is the idea of a Covid vaccine passport, which would be issued to those who have received their jabs.

So, what is a vaccine passport, and what do we know about them?

What is a Covid vaccine passport?

A Covid vaccine passport would essentially act as proof that someone has received their vaccination and could be requested before someone is allowed inside an establishment.

The passport could mean vaccination information being added to the NHS app (Picture: Getty)

Currently, anyone who gets a vaccine receives a card and the details go on to their medical records.

The passport could mean the information is added to the NHS app, allowing mobile phone users to prove they have received their injections.

People would also be able to use a recent negative test or immunity status as a ‘passport’.

Will Covid vaccine passports be introduced in the UK?

Boris Johnson confirmed that vaccine passports – called ‘Covid status certification’ – are an ‘important way forward’ but that there are no immediate plans to introduce the scheme.

The Prime Minister spoke about the government’s plans at a Downing Street press conference on April 5.

It’s likely Brits will have to show proof of vaccination in order to travel to some foreign countries. (Picture: Reuters)

He said: ‘I think the most important thing to say to everybody listening and watching is that there is absolutely no question of people being asked to produce a certification or a Covid status report when they go to the shops or to the pub garden or to the hairdressers or whatever on Monday.’

He stressed that the scheme would not be up and running for the next two steps of lockdown – April 12, or May 17.

People will not necessarily have to prove they have received the vaccine – if they have not yet received it they can also show proof of a recent negative test or proof that they have tested positive for Covid-19 antibodies.

Trials are due to take place in the coming weeks at select sporting events, where participants will take a coronavirus test both before and after the event.

Social distancing must be maintained and attendees must wear masks in enclosed indoor spaces.

Where will the Covid vaccine scheme be trialled?

GRAMMYS 2021: Watch Doja Cat’s ELECTRIFYING Say So Performance
Singaporean ride-hailing giant Grab is reportedly set to list in the US via a SPAC merger at a $35 billion valuation

Should I buy a house right now? 5 things to know about the wild property market as homes sell for sky-high prices in under a week

Conservatives embrace their own form of ‘wokeness’

People have stopped paying their car loans, and it shows millions are struggling in this economy