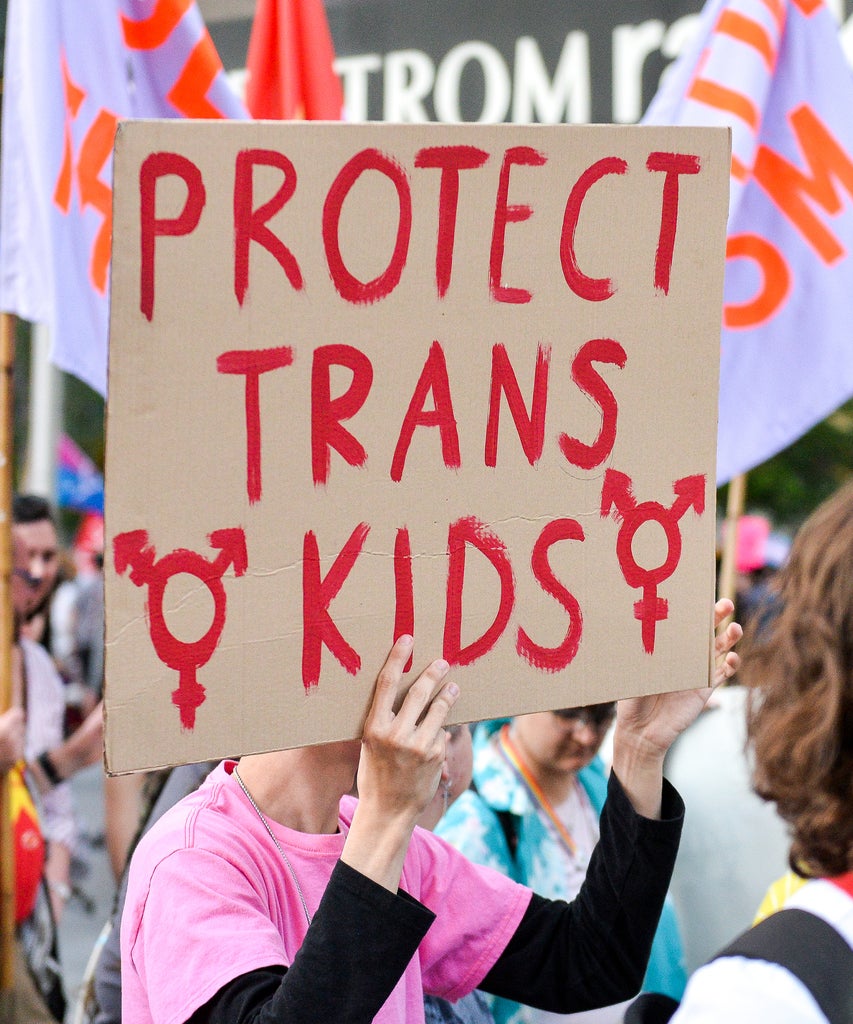 STREET, TORONTO, ONTARIO, CANADA – 2019/06/21: Placard saying, Protect the Trans kids, during the Trans march.
Spectators displayed their support towards the transgender and non-binary people while demonstrating on the streets of Toronto in a Trans March during the Pride Month. (Photo by Anatoliy Cherkasov/SOPA Images/LightRocket via Getty Images)

On Tuesday, Arkansas became the first state in the U.S. to ban gender-affirming treatments and surgery for transgender youth. The enactment comes after lawmakers in the state’s Republican-controlled house and senate overrode the governor’s objections to the anti-trans bill which he called “vast government overreach.” As a result, Arkansas is likely the most dangerous state for trans kids to exist in the country.

The Arkansas Save Adolescents from Experimentation (SAFE) Act makes it illegal for doctors to provide gender-affirming hormone treatment, surgery, or puberty blockers to anyone under 18-years-old. It also prevents them from referring patients to other providers for treatment. The law also forbids “cross-hormone therapy” — a gender-affirming treatment that allows trans people to change their physical appearance to be more consistent with their gender identity. The process of receiving these treatments, experts say, can vastly improve young people’s mental health and in some cases can even be life-saving.

Republican Gov. Asa Hutchinson vetoed the bill on Monday in response to pleas from parents of trans youth, pediatricians, and social workers who said this legislation would harm a community already at higher risk for depression and suicide. The SAFE Act has already been opposed by several medical and child welfare groups. Hutchinson called the legislation “a product of the cultural war in America.” He argued that it creates “new standards of legislative interference with physicians and parents as they deal with some of the most complex and sensitive matters involving young people.”

The new law also represents a considerable step backward for trans people fighting for equality. LGBTQ+ advocates have already spoken out against the Act, vowing to sue to block the ban before it takes effect this summer, reports The Guardian.

Both the ACLU and the Trevor Project, a suicide prevention and crisis intervention organization for LGBTQ+ youth, have released statements warning of the damage legislation like this will cause. The ACLU said it “will drive families, doctors, and businesses out of the state and send a terrible and heartbreaking message to the transgender young people who are watching in fear.” Meanwhile, the Trevor Project forewarned that trans youth “would be put at significantly increased risk of self-harm because of legislation” as it pushes them “farther to the margins of society.”

The American Psychiatric Association, among other medical groups, has come out against the law saying that “patients and their physicians, not policymakers, should be the ones …read more

GRAMMYS 2021: Watch Doja Cat’s ELECTRIFYING Say So Performance
Kim Kardashian to Addison Rae: Are You Having Sex With Kourtney?!

Goldman Sachs responded to burnout fears in its consumer division by making evenings and Fridays ‘video free’, encouraging staff to go for walks and talk on the phone instead