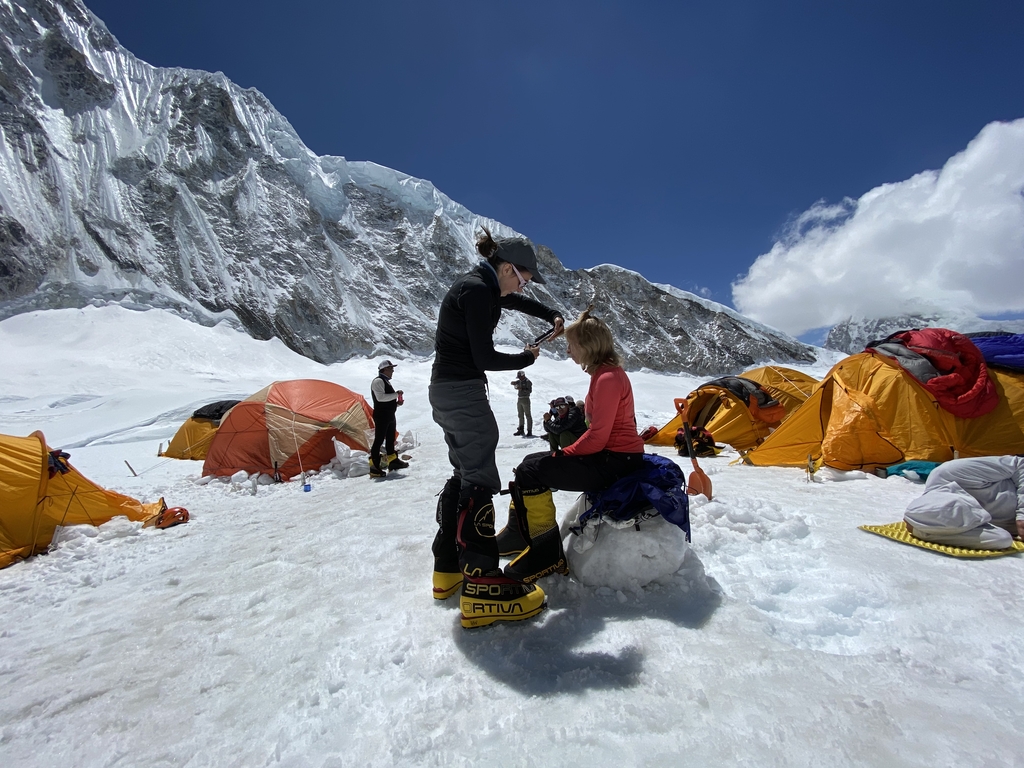 There’s a record for highest-altitude hair cuts — and it just got shattered.

San Jose resident Heather Werner is on an expedition to summit Mount Everest this month, her latest exploit toward fulfilling a bigger challenge.

“Heather’s goal is to summit the highest peak in each of the seven continents — known colloquially as the ‘Seven Summits,’” says her husband, Chris. If all goes well, Everest will be her sixth, with only Alaska’s Mount Denali remaining. But Heather, a hair stylist and owner of Campbell’s Foundations Hair Studio, may have already broken a record we didn’t even know existed until now.

“Returning to Everest Base Camp from her first acclimatization climb through the Khumbu Icefall,” Chris says, “she has set what we believe to be the record for ‘highest elevation haircut,’ completing four cuts of team members and Sherpa at Camp 1 (19,500 feet).  Not to be outdone, she topped herself by providing a fun ‘faux-hawk’ cut for her team’s expedition leader Jonathan Schrock at Camp 2 (21,000 feet). The previous record seems to have been held by a French-Canadian stylist on top of Mount Kilimanjaro (19,341 feet).”

Heather, who has been posting her adventures on Instagram, declared, “After building a makeshift salon chair at Camp 1, @foundations_hairandmakeup Everest was open for business… A huge thank you to my models, who were brave enough to let me work when my brain was slightly oxygen-starved. If the weather holds and I’m not a wreck at higher camps, we may try to boost our number as we climb. But for now, it feels damn good to be a world record holder.”

In case you wondered, those ‘dos included long layers for @dakik_climbs, a bang trim for Lilia, tousled pompadour for Ed, blunt ends with a middle part for Pasang Kanch and a textured fauxhawk for Schrock.

Travel tip: Unless you’re mountain climbing with Heather, this is not an Everest base camp perk for everyone. Best get that fauxhawk before you climb.

With vaccines rolling out and some parts of the world reopening, readers are beginning to travel once more — and they’re sharing their adventures with the rest of us. If you’re traveling, too, tell us what it’s like out there. Share your travel stories, trip tips and a selfie — be sure to tell us who’s who, where you are and where you’re from — and email it to jburrell@bayareanewsgroup.com.