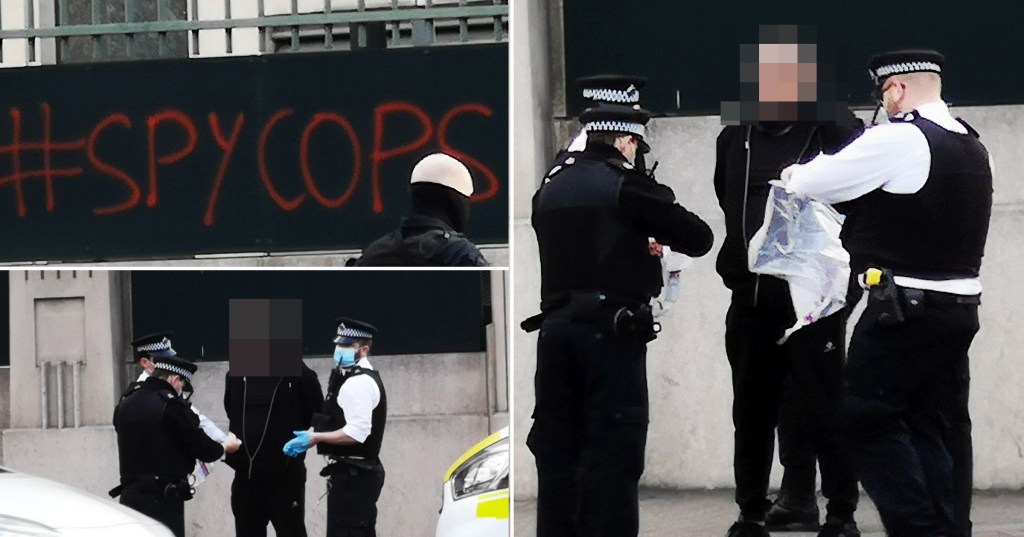 A man has been arrested after writing #SPYCOPS on the outside of MI6’s headquarters.

The phrase, which refers to an undercover policing scandal in the UK, appears to have been spray painted in red on the building in London.

Pictures show officers in Vauxhall in discussion with a man who appears to be in handcuffs on Saturday evening.

It came on the same day as the biggest ‘Kill the Bill’ protest yet took to the capital’s streets.

‘Spy cops’ refers to a number of undercover police officers who infiltrated various activist groups and had relationships with women, including some who they had children with them.

Kill the Bill demonstrators, meanwhile, are critical of the increased powers that officers are given over protests in the Police, Crime, Sentencing and Courts Bill providers.

A police van and various officers were in attendance when the man was detained at the high security facility.

A photographer said he was arrested shortly after someone had graffitied the message on the wall.

A Metropolitan Police spokesperson said: ‘Police were called at around 6pm on Saturday, 1 May, to a report of criminal damage at the SIS building at Vauxhall Cross.

Palo Alto coach on SCVAL’s no playoff stance: ‘All of us administrators, coaches and teachers have failed you’

‘He was taken to a south London police station and bailed to return on a date in late May.’

MORE : Undercover police ‘joked about sex with female targets in front of bosses’

If Biden and Putin actually do meet, they shouldn’t waste time listing the things they’re mad about

The best banks and credit unions in California for 2021

Road to Retirement: How taxes, deficits and markets are connected