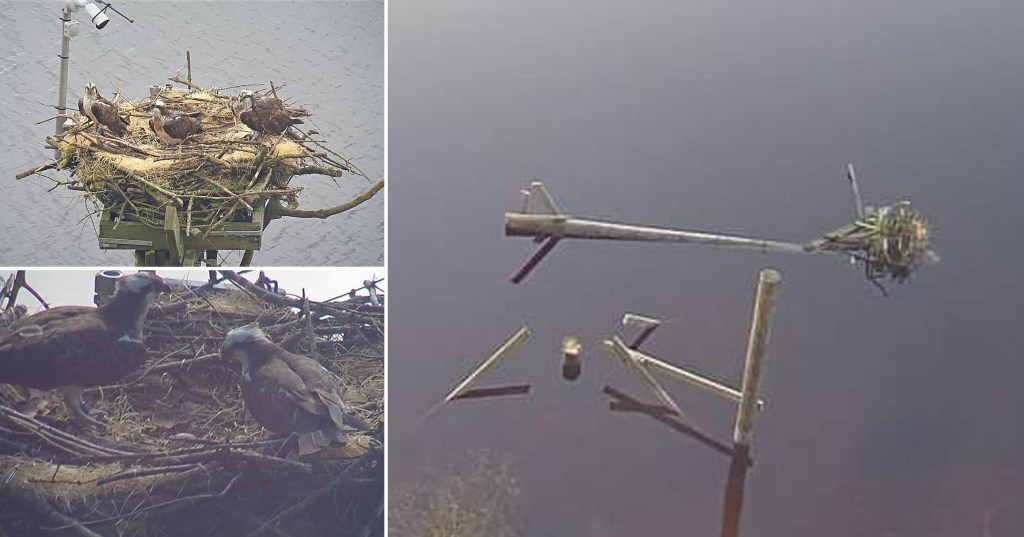 An incredibly rare osprey nest was cut down by vandals with a chainsaw just one day after the bird laid its first egg.

The nesting platform in north Wales was host to a breeding pair of ospreys, a rare and highly protected species of bird.

Police believe the vandals arrived by boat at around 9.45pm and would have ‘a strong motive’ to rid the lake area of ospreys.

The nesting platform had been set up by conservation programme Brenig Osprey Project in partnership with the North Wales Wildlife Trust.

North Wales Police’s rural crime team tweeted on Sunday: ‘We are following up a number of inquiries and also using the latest technology to help us move this investigation in the right direction.

‘Motives are a huge clue for this crime and a phone call today has given us one that we hadn’t considered.’

On Sunday, the North Wales Wildlife Trust tweeted an image of the two ospreys looking at the space where their nest should have been in Brenig, which borders Conwy and Denbighshire.

Good Morning and thank you all for the tremendous support you are giving to our ospreys,LM6 and LJ2,
This photo was taken at 6.45 this morning.Both ospreys were on the perch looking at where their nest should be.#BrenigOspreyProject #DwrCymru #NorthWalesWildlifeTrust #LlynBrenig pic.twitter.com/LuVbaaj9wB

Brenig Osprey Project said they had cleared one of the nearby platforms that was not in use to see if the breeding pair would relocate to it, and potentially lay another egg.

Rob Taylor, the team’s manager, said in a video appeal posted on Twitter: ‘Ospreys are a very rare, highly protected schedule 1 bird – the greatest protection in the UK.

‘They’re very iconic in Wales, we literally until a few years ago only had one breeding pair and now we have a handful of breeding pairs and this was one of them. Their first egg had been laid yesterday.’

Mr Taylor said the team had footage of the act because there were cameras on the platform, adding: ‘We’re pulling all the stops out to try and catch the person or persons responsible for this.

‘Believe me they will receive the full force of the law if we do catch them.’

He continued: ‘The whole team are absolutely devastated and I am sure the whole community are – these birds give a lot of people a lot of pleasure.

‘I can’t understand how anybody would do something like that.’

Brenig Osprey Project thanked the public for all their offers of financial support and volunteering in a Facebook post this weekend.

Dodgers lose in extra innings again, get swept by Cubs