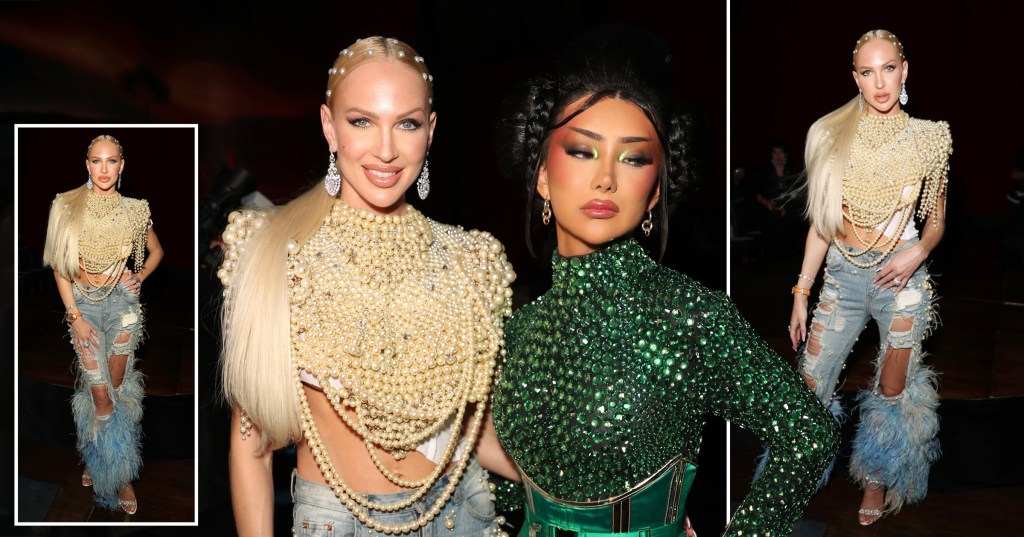 Selling Sunset star Christine Quinn was all denim and pearls in a pretty out-there look for New York Fashion week on Saturday.

Taking up her place in the front row at The Blonds’ Spring/Summer 2022 show, with YouTuber Nikita Dragun, the reality star, who recently made a play to be a RuPaul’s Drag Race guest judge, also took time to pose for photographers and show her outfit off to its full advantage.

The 32-year-old Texan was quite literally dripping in pearls, wearing a top made of strings of pearls that hung around her neck, down to her navel and dangled from her shoulders, with a mesh of them across her chest, all attached to a white T-shirt.

The lower half of her body was no less striking, as the luxury real estate agent and model was clad in high-waisted jeans with large rips down the middle, and which, from the knee down, were excessively frayed for a dramatic denim look.

Peals were present and correct here too, studded around the top and sides of her jeans, and the star also wore her hair, which was swept back into a sleek low ponytail, adorned with pearls.

Beneath the feather-like frayed hem of her jeans, a pair of white stiletto heels with matching pearl straps could also be peeped.

Christine, who gave birth to her first child, son Christian Georges Dumontet, with her retired tech entrepreneur husband Christian Richard, 42, in May, excitedly shared the show on her Instagram Stories.

Paul Staehle and Karine Martins: We're Getting a Paternity Test on Maury!

She introduced the show on her Stories with 29-year-old Nikita, resplendent in green sequins, who joked: ‘If you’re not at the front row, then where you at?’

Hubby Christian was also briefly revealed to be there, as she panned the camera round to show him smiling next to her, before filming some of the models as they walked in the show.

Socialite Paris Hilton was one of The Blonds’ star attractions, opening the show in a sparkling magenta cut-out dress, with attached full-length gloves and matching stiletto-heel boots.

Christine was excited to see Paris walk in the show (Picture: Instagram/thechristinequinn)

This made for a busy weekend for her, as she also threw an engagement party with her fiancé Carter Reum and appeared at the US Open men’s semi-final, where she sang along to her song, Stars Are Blind, as it played over the court’s sound system.

As the OG reality star passed by Christine, the Netflix star joined in with the whoops, shouting: ‘Love you, Paris!’

The star showed off her second look of the day (Picture: Instagram/thechristinequinn)More: US Showbiz news

9/11: Celebrities who were affected …read more

Who is Britney Spears’ fiancé Sam Asghari and how long have they been together?

Married At First Sight UK: Nikita Jasmine announces return to series after being removed from show

Yes Sir, I Can Boogie singer María Mendiola dies at 69

The Best Memory Foam Pillows For Every Type Of Sleeper