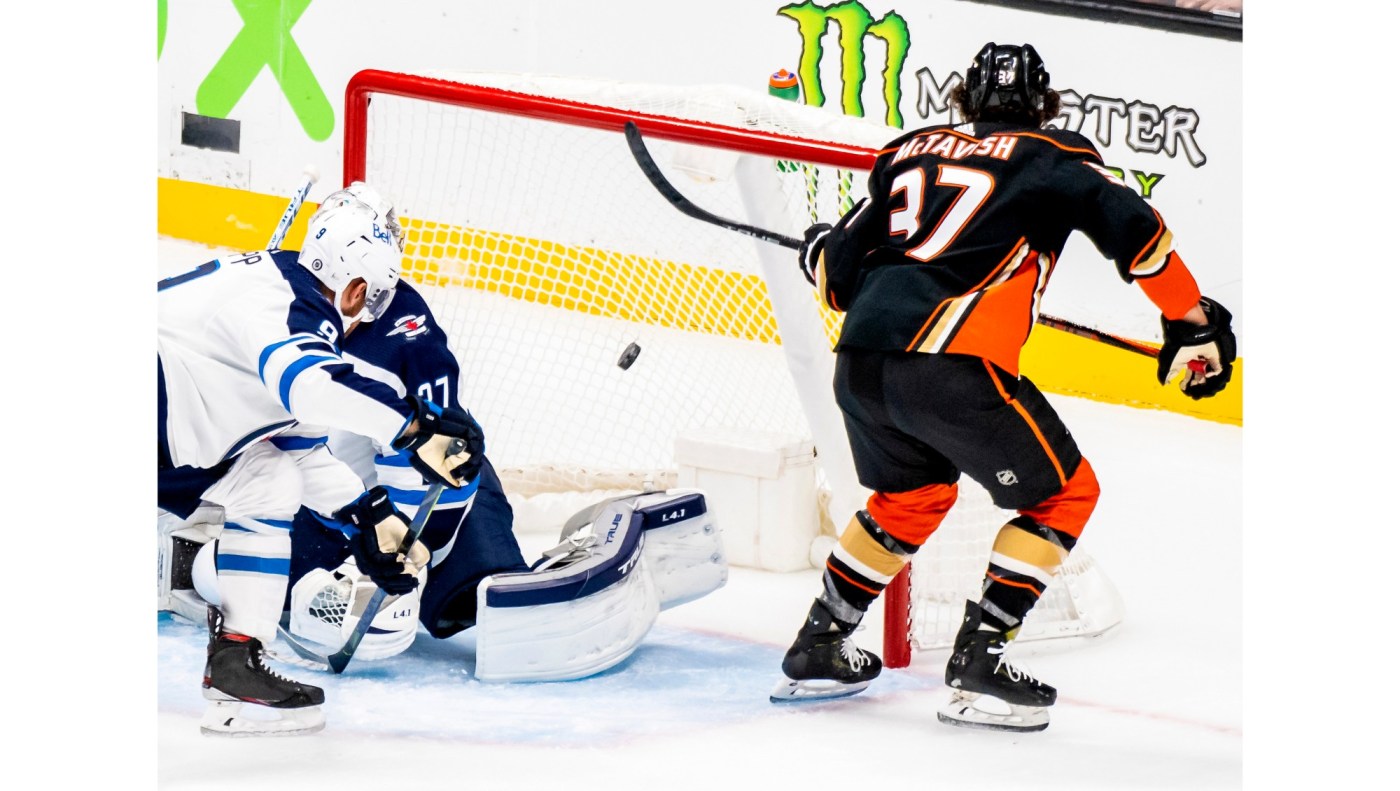 ANAHEIM — A roaring, chanting, orange-and-black clad crowd greeted the Ducks upon their return to Honda Center for the opening night of the 2021-22 season. A feeling of familiarity spread through the 28-year-old arena at the corner of Katella and Douglass after a bleak season in which fans were mostly banned.

The roar of the crowd, absent because of the COVID-19 pandemic, washed over the Ducks during their 4-1 victory over the Winnipeg Jets on Wednesday, a welcome sign that something resembling normal life might be on the way sooner than later. It wasn’t a full house, but the fans were loud.

“I think without fans, there’s no game,” Eakins had said beforehand when asked of the possibility of a full arena Wednesday. “So, it’s a good day.”

Then, for the opening minutes, the Ducks were no-shows to their own party. The Jets swarmed them from the opening faceoff, controlling the puck and putting Gibson under siege. It was as if the Ducks had gorged themselves at one of the food trucks parked outside the arena.

Finally, after the Jets outshot them 7-0, the Ducks gave their fans plenty to cheer. Defenseman Kevin Shattenkirk flipped a shot from the right wing through traffic and into the back of Connor Hellebuyck’s net for a 1-0 lead on the Ducks’ first shot on goal, at 6:11 of the opening period.

McTavish then put the crowd, himself and his teammates into a frenzy by becoming the youngest player in Ducks history to score a goal, at 18 years, 256 days. A video review was needed to correct a referee’s quick whistle. There was no doubt the puck was loose.

McTavish was one of four rookies in the Ducks’ lineup and their second-youngest to appear in a game after Oleg Tverdovsky, who was eight days younger when he made his NHL debut in 1994. McTavish was in the lineup only because Max Jones had a non-COVID-related illness.

In the second period, after Winnipeg’s Kyle Connor scored to cut the Ducks’ lead to 2-1 at 3:48, McTavish assisted on Adam Henrique’s power-play goal that restored their two-goal lead at 13:20. McTavish then felt the wrath of the Jets, with Dylan DeMelo kneeing him along the boards.

The Ducks’ power play was among the less distinguished aspects of their game during the pandemic-shortened, 56-game season, when they finished with an abysmal 8.9 percent success rate, the worst in NHL history. So, Henrique’s man-advantage goal held added significance.

Rickard Rakell sealed the deal with a power-play goal 6:20 into the third period, making it 4-1 and prompting the fans to urge the Ducks to score a fifth, chanting, “We want chicken,” which was a giveaway in past seasons. Drysdale and Getzlaf assisted on Rakell’s goal.

Teen boy, 16, gets 9 years to life for stabbing college girl to death in phone robbery