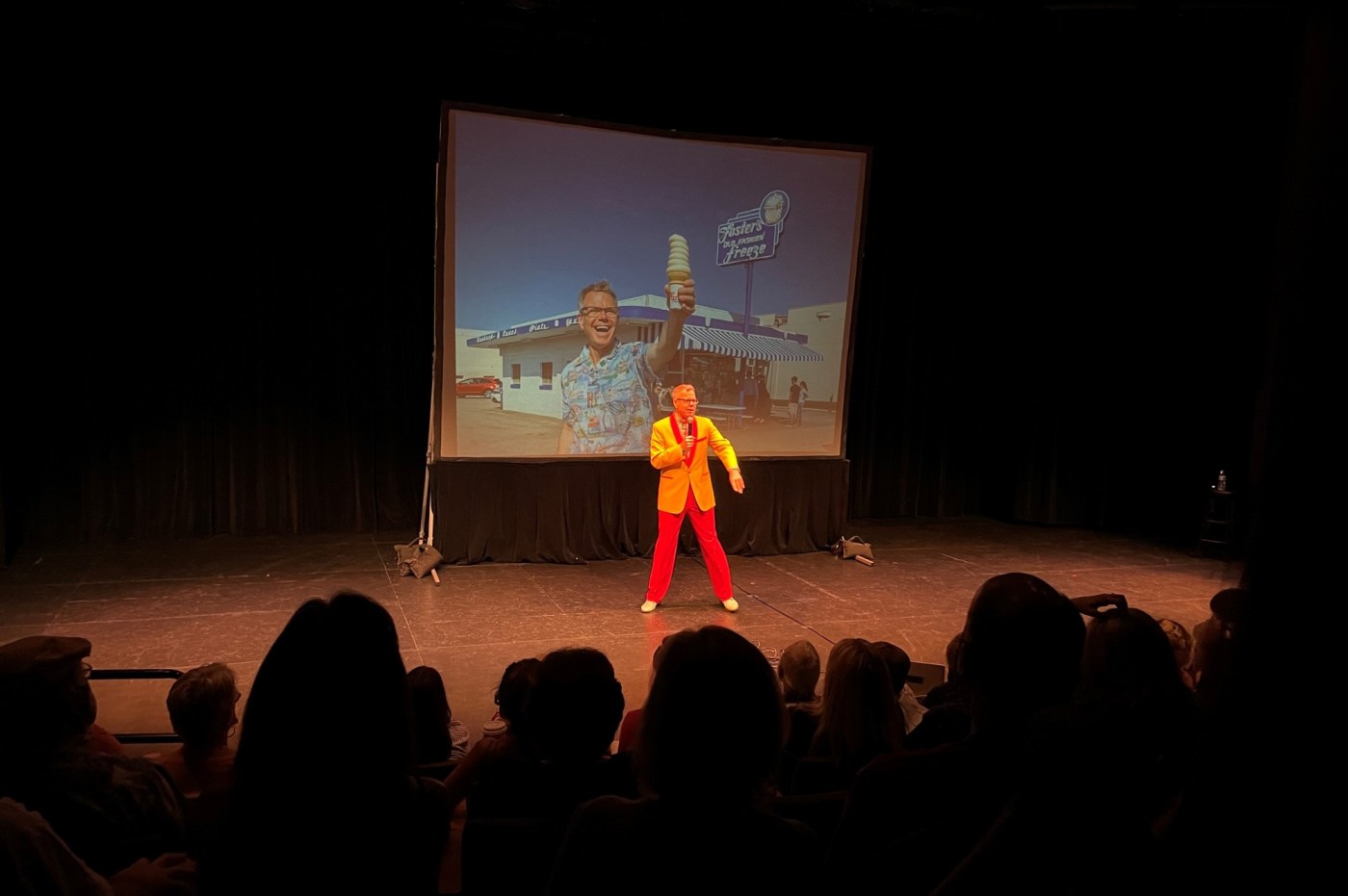 Charles Phoenix, the photographic slide collector and entertainer, did his one-man show in Brea the past two Sundays. I attended the second with a friend who wanted to see him and never had; I’d seen Phoenix near and far over the years but was game to go again. He’s fun.

On the stage of the Curtis Theatre, Phoenix, who lives in L.A. and hails from Ontario, told the story of how he discovered thrift stores as a boy. Accepted after an audition for a production of “Oklahoma!” at a local theater, the Gallery, he was told he needed a western shirt and could get one across the street at the Leroy Boys Home thrift shop.

When he opened the store’s door, he immediately realized: “This is better than the husky boys department at Sears.”

In his show, he displayed castoff family slides from the 1950s, ’60s and ’70s, either rescued from thrift stores or donated to him. And he offered cheerful, witty commentary on the details in the shots: stunning two-tone cars parked in suburban driveways, a casual family portrait outdoors in which a boy is holding a rifle, a couple in their living room who have not one, not two, but three ashtrays within reach.

Other slides were straightforward shots of long-lived Southern California attractions, including Indio’s Shields Date Garden, Pomona’s LA County Fair, Montclair’s Bowlium and Anaheim’s Disneyland (perhaps you’ve heard of it?), all with stories from the host, delivered with flair.

One slide was of an early McDonald’s with the twin arches piercing the building. To get the look the McDonald brothers wanted for their original San Bernardino stand, “they went,” Phoenix declared with brio, “to an architect in Fontana.”

That’s true: Stanley Meston. Even knowing the story, I chuckled along with everyone else at the seeming incongruity.

“I know, right?” Phoenix continued, milking the moment. “The architects in Fontana are fantastic!”

The late, great sportswriter Jim Murray was quoted in this space after my surprise encounter with his Walk of Stars plaque in Palm Springs. Recently reading the 1984 newspaper history “The Life and Times of Los Angeles,” I reveled in a few pages devoted to Murray and his bon mots. Here are three.

About the Indy 500: “Indianapolis is America’s only sanctioned 33-man suicide pact. There are some accidents where all they need is a whisk broom and an ashtray.”

About hapless boxer Floyd Patterson: “He’s the kind of guy who goes through life spilling soup on his boss’ wife. He’s not a fighter, he’s a situation comedy.”

About horses’ imagined excitement at the retirement of violent jockey George Edward Arcaro: “To understand what this can mean to a horse, just imagine the feeling of the crew of the Bounty when they put Captain Bligh to sea in that lifeboat, or the Russians when they got word Stalin was running a temperature.”

All over the IE

Sunday’s column was in part a refresher on my task here, which is to serve the Inland Empire and even a bit beyond.

Joe Rogan Admits He Almost Got Vaxxed, Tells People to ‘Get Vaccinated and Then Get Sick’